Why won't two blocks kept in contact on a horizontal frictionless surface move, due to the normal force? No exterior force is applied to them from any direction (except for gravity). 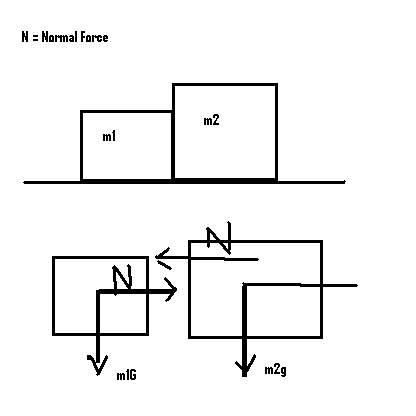 So I thought if no external force is applied horizontally or vertical upwards to such a system of blocks(here m1 and m2) on a frictionless surface then why they don't move?

I hope you guys understand my confusion here

In short, you are making a simplifying approximation ("frictionless surface"), while keeping another as negligible force in place ("whenever two bodies are in contact there always exist normal force"). This will quickly lead to an apparent contradiction.

(Also even saying "in contact" is an simplification (it just means that atoms are very close to each other), so you'll really run into trouble if you'll try to account for only some of the forces.)

Here's an example which hopefully explains this in more detail:

I see the problem as being the statement "whenever two bodies are in contact there always exist normal force". That really isn't true, because there are many situations where you might wish to have two bodies in contact, and you might not wish there to be any repulsive forces between the bodies. Your example is one of them. So don't think of the normal force as something that automatically appears any time two bodies touch, think of it as a force that can appear whenever two bodies touch. Its strength will always be whatever is necessary to keep one body from penetrating the other, but if there is no tendency for one body to penetrate the other anyway, then there's no need for any normal force. In short, it's a force that always depends on the rest of the situation.

the misconception is that you are thinking whenever two bodies are in contact there must be a normal force, this is not true. Normal force arise when one body is in contact with other body and also exert a force on it.since in your case the blocks are rest so no force is applied on either body by another. that is why there is no normal force.

172
Given Newton's third law, why are things capable of moving?

3
How is Normal Force on Table affected by two Blocks sliding on Triangle?
17
Block on a block problem, with friction
2
Is the newton's second law for a body experiencing a frictional force, relative to the surface in contact?
1
Why is the force of Friction less than the force applied on the block in this situation?
0
Which normal force for friction?
8
Does the normal force require other forces to exist?
1
Do we consider all the normal forces on a body while finding the friction acting on a body?