Why is the wave function inside a delta potential non-zero?

The wave function outside an infinite well is zero, owing to the fact that we assume particles to have finite energies. But in the case of a delta function potential $\delta(x-a)$, the wave function is non-zero at the point $a$.

Why is the wave function inside a delta potential non-zero?

There's no 'inside' to meaningfully speak of.

Why don't we set the wave function to zero at a?

For the delta well potential, there is a jump condition at $x = a$; $\psi'$ must be discontinuous there.

One can integrate the SE across $x = a$ and find that $\psi'$ must change discontinuously there by an amount proportional to $\alpha$ but there is no requirement that $\psi$ be zero there.

This is because, loosely speaking, $\psi''$ contains a delta 'function' at $x = a$ (due to the discontinuity of $\psi'$ there) that 'matches up' with the delta potential there.

In contrast, for the case of the infinite well (particle in a box), the potential is constant and infinite outside of the well and so the SE (outside) is

for which $\psi = 0$ is the only reasonable solution.

Better answer: If you can do the calculation without additional assumptions and the result is not what you would intuitively expect, check the calculation and if it's correct, one has to accept it...

The delta well is the limit of the finite potential well, and results from decreasing the width of the well (obviously, sorry) but increasing the potential (previously constant in the finite well), as a consequence of that limiting process.

Although the spike is not physically feasible, (there are no infinities in nature) it's handy as a guide to some physical situations:(it might even represent the electron!, but perhaps not).

To be more realistic, it can represent cases where a particle is allowed to move in two regions of space, separated by a (very thin) barrier.

Since -$\delta(x/\alpha) $ is infinite at 0, irrespective of the value of $\alpha$, $\alpha$ may be considered to give an indication of the strength of the potential in a way set out below.

In fact, $\alpha$ does appear in reflection and transmission coefficients, as well as energy level estimates.

The delta-function well has just one bound state, and the energy inherent in that state is dependent on $\alpha$, the greater the value assigned to $\alpha$ is, the more negative energy results. In other words $\alpha$ acts as an indicator of the depth of a stationary state particle. 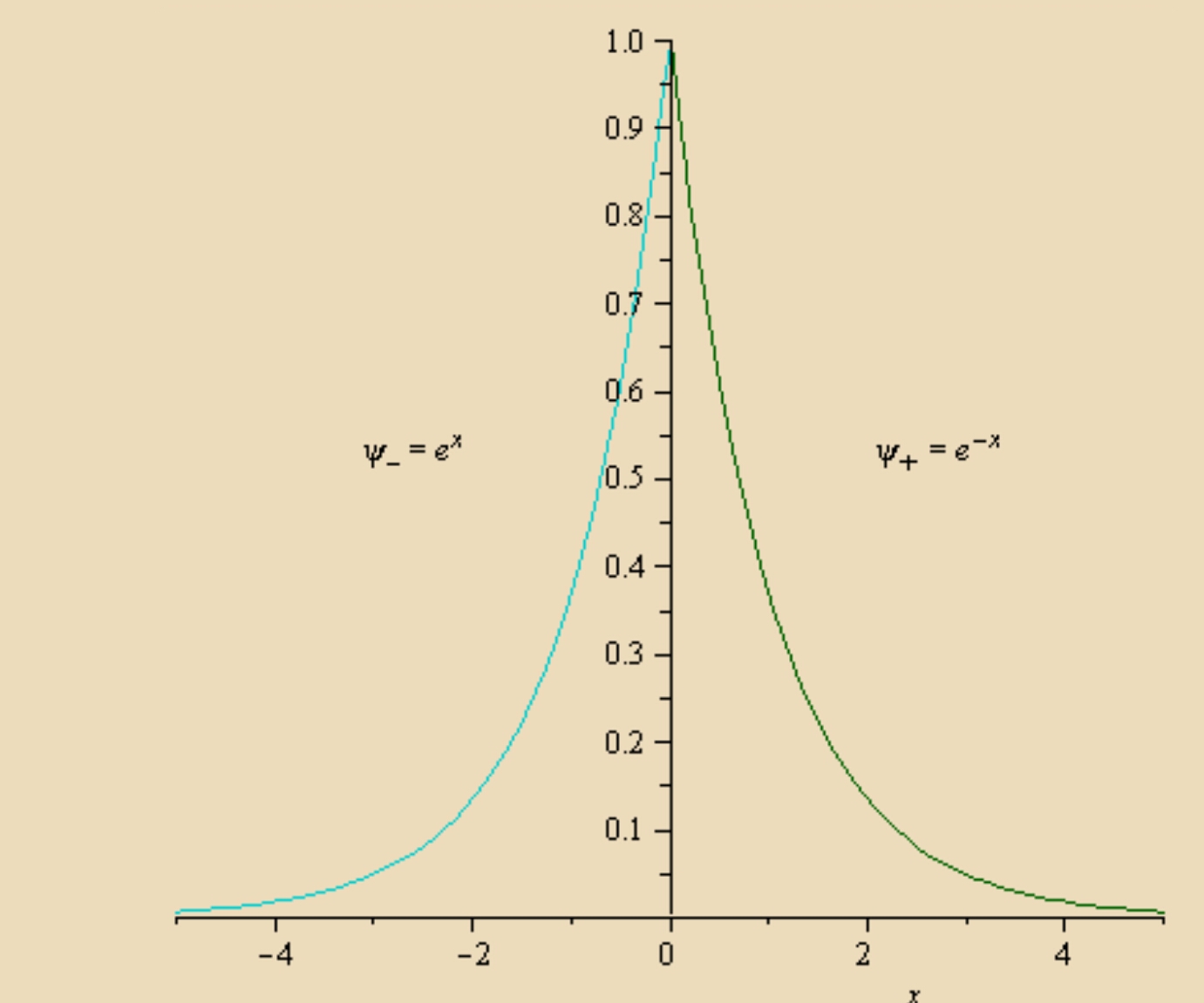 Obviously the amplitude of the location of the particle reaches its peak at 0, and then, depending on the strength of the delta function, falls away exponentially on both sides.

Outside the interval $[-a,a]$ the Schrödinger equation is that of a free particle (as the potential is zero), therefore we label its solutions as $$ \psi(x) = \begin{cases} \psi_{\textrm{free_left}}(x),\quad x< -a\\ \psi_{\textrm{free_right}}(x),\quad x> a\\ \psi_{\textrm{internal}}(x),\quad a\leq x \leq a \end{cases} $$ with $\psi_{\textrm{internal}}(x)$ being whatever the solution of the Schrödinger equation with $V=V_0$ may be. Because the right hand side of the Schrödinger equation $$ \frac{-\hbar^2}{2m}\,\psi''(x) = (E-\lambda V(x))\,\psi(x) $$ is continuous, we require the left hand side to be continuous too, hence the first two derivatives of the wave functions must match in $x=\pm a$. This gives back non-zero solutions in any of the three regions stated above (left, inside and right). The transmission coefficient for tunnel effect between each pair of zones can be found to be expressed as a function of $V_0,a$.

In the $\delta$ limit approximation, the solutions $\psi_{\textrm{free_left}}(x)$ (respectively $\psi_{\textrm{free_right}}(x)$) remain untouched as free particle solutions, as they are not affected by the potential. What changes is that the wave function is not required to be continuous up to the second order derivative in $x=a$ and as such one of the two continuity equations for matching the coefficients cannot be written as before; the trick is, instead of taking the second order derivative, to integrate the wave function in the interval $[-a,a]$ and then let $a\to 0$ in order to have another system of equations for the wave functions coefficients. These can be solved and there is no constraint on them to always vanish, likewise for the tunnel transmission coefficient in the limit $V_0a\to k$.

Not the answer you're looking for? Browse other questions tagged quantum-mechanics wavefunction schroedinger-equation dirac-delta-distributions or ask your own question.