Asymptotic Completeness, generalized free fields, and the relationship of thermodynamics with infinity

Asymptotic completeness is a strong constraint on quantum field theories that rules out generalized free fields, which otherwise satisfy the Wightman axioms. If we were to take a limit of a list of continuous mass distributions $\rho_n(k^2)$ that approaches a distribution in some topological sense, however, is there anywhere an analysis of how the behavior of the $\rho_n(k^2)$ would approach the behavior of the free field?

The following statement seems too bald (from the review "Outline of axiomatic relativistic quantum field theory" by R F Streater, Rep. Prog. Phys. 38, 771-846 (1975)): "If the Källén-Lehmann weight function is continuous, there are no particles associated with the corresponding generalized free field; the interpretation in terms of unstable particles is not adequate". Surely as we take the support of a generalized Lorentz invariant free field to be arbitrarily small we could expect that the behavior, at least as characterized by the VEVs, which constitute complete knowledge of a Wightman field, would eventually be arbitrarily close to the behavior we would expect from a free field?

Classical thermodynamics has a complicated relationship with infinity, in that the analytic behavior of phase transitions does not emerge unless we take an infinite number of particles, but the behavior of very large numbers of particles nonetheless can approximate thermodynamic behavior rather well. By this elementary analogy, it seems premature to rule out generalized free fields.

It also seems telling, although weakly, that the Källén-Lehmann weight function of an interacting field is nontrivial in quasiparticle approaches.

Being able to derive an S-matrix requires that a theory must be asymptotically complete, however real measurements are always at finite time-like separation from state preparations, with the interaction presumably not adiabatically switched off at the times of the preparation and measurement, so that something less than analytically perfect asymptotic completeness ought to be adequate. 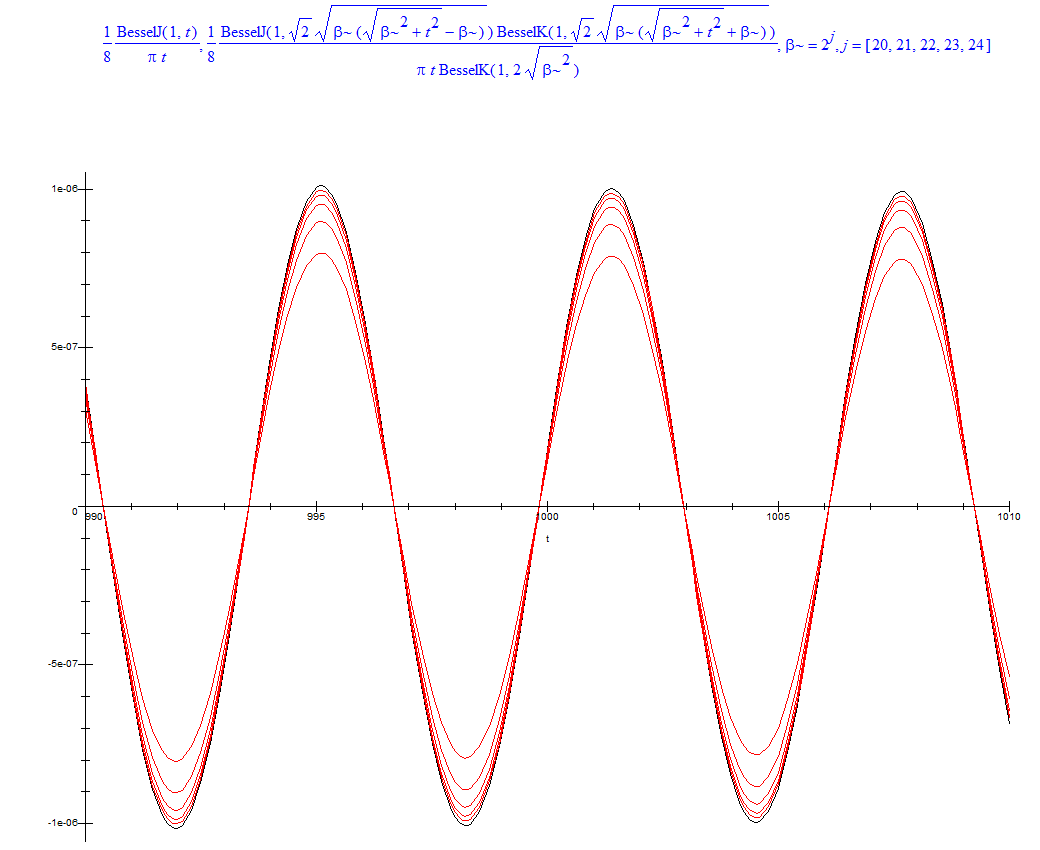 $I(t)$ and $I_\beta(t)$ are very closely in phase, as seen here, until $t$ is of the order of $\beta^{2/3}$ in wavelength units. We can take $\beta$ to be such that this approximation is very close out to billions of years (for which, taking an inverse mass of $10^{-15}m$, $\sqrt{\beta}\approx \frac{10^{25}m}{10^{-15}m}=10^{40}$), or to whatever distance is necessary not to be in conflict with experiment (perhaps more or less than $10^{40}$). This is of course quite finely tuned, however something on the order of the age of the universe would seem necessary for what is essentially a stability parameter, and the alternative is to take the remarkably idealized distribution-equivalent choice $\beta=\infty$ as usual. [I would like to be able to give the real component of the propagator at time-like and space-like separations for this weight function, however Gradshteyn&Ryzhik does not offer the necessary integrals, and nor does my version of Maple.]

A continuous spectrum corresponds to a branch cut in the resolvent of the Hamiltonian in the rest frame of the system. A sharply peaked, analytic spectral distribution leads to a nearby pole in the analytic continuation of the resolvent to the nonphysical sheet. Thus you somehow describe a decaying particle together with their decay products. But asymptotically only the decay products show up, and cannot be interpreted in terms of real particles just because of asymptotic incompleteness - these particles are not in the representation!

My answer to the question ''False vacuum in axiomatic QFT'' https://physics.stackexchange.com/a/29763/7924 may also shed light on your problem.

Not the answer you're looking for? Browse other questions tagged quantum-field-theory research-level wightman-fields or ask your own question.

16
Is the S-Matrix the only quantum field observable?
14
Some questions about the spectral function
7
Massless boson in 2D and its (retarded) propagator
4
Klein-Gordon propagator integral in the light-like case
14
Physical interpretation of the retarded vs. Feynman propagators?
9
Propagator Correction in $\phi^4$ theory - why doesn't this secular growth break perturbation theory?
0
How to get the imaginary part from the Källén-Lehmann propagator
7
Applications of position-space formula for a Feynman propagator?