What is the Direction of area vector?

For an open orientable surface there are two possible, equivalent normals: $\vec n$ and $-\vec n$.

The usual convention is that you choose a direction in which the perimeter of the surface is traversed and define the positive direction as the direction given by the right hand rule, as shown in the following picture. 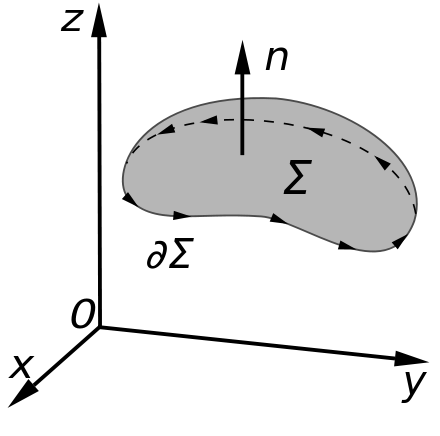 This can also be done for non-simply connected surfaces (i.e. surfaces with holes), as it is shown in the following animation:

But there are also open surfaces which are non-orientable. For such surfaces it is impossible to differentiate between a positive and negative orientation (positive/negative normal), as it should be clear from the following picture, showing a famous non-orientable surface, the Moebius strip. 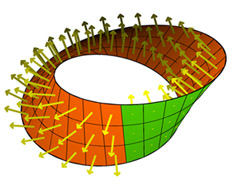 By convention, for a flat lamina or a plane surface, the area vector is a vector whose magnitude is the area of the surface and whose direction points in a direction perpendicular to the surface.

If you have a curved surface, then you have to consider elemental areas, i.e: small patches of area denoted by $dA$ whose direction is perpendicular to the small patch of area.

Mathematically, you can denote the area vector as

where $|A|$ is the magnitude of the area and $\hat{n}$ is the unit vector whose direction is perpendicular to the patch of area.

The differential form of the above equation can be written as,

Using the above differential equation, you can calculate the vector sum of elemental area vectors to get the area vector for the irregularly curved surface.

The sign of the vector does depend on the type of surface, i.e: convex or concave, depending on your conventions.

Not the answer you're looking for? Browse other questions tagged vectors conventions geometry or ask your own question.

3
What is the direction of area vector while calculating magnetic flux?
0
How to specify the orientation of an area vector?
1
What is an axial and polar vector?
0
What actually is the vector of angular momentum?