What actually is the vector of angular momentum?

If an object spins around a central point, it gets angular momentum which is a vector with an orientation dependent on whether its clockwise rotation or anticlockwise, i get that. But what the vector part actually is, is confusing me. Does it mean that the object spinning gets a force going upwards or downwards? In that case, how do you explain bicycles? Shouldn't the spinning result in angular momentum pointing in one direction thus forcing your bike to fall over the same way someone would if they pushed you from either side of the bike?

Angular momentum has a magnitude, and is about some axis (thus has some sense of "direction). So vectors are used to represent the quantity, and much of the machinery of vectors applies to it. However, there are ways in which "vector" is a misleading term when applied to it, and some people characterize them as being in other mathematical structures, such as a Clifford algebra. Regardless of the exact mathematical formulation, they do not live in the same "space" as the physical world. The vector that represents angular momentum has physical meaning, but it doesn't physically exist. If an angular momentum is represented by a vector pointing east, that doesn't mean that there is any physical thing pointing east. It just means that the angular momentum is around an east-west axis, and that it is "positive" in the eastern direction, where "positive" is an arbitrary convention that we use to keep track of direction.

And apart from all the above, angular momentum is not a force, any more than linear momentum is. It is rotation around an axis.

By rotational direction we just mean the right-hand-rule, so, a way to determine whether the rotation is clockwise or counterclockwise.

Don't mix the two. Vector forms are mathematical inventions that can represent physical properties depending on the situation. They mean different things for different types of properties. They sometimes feel fairly "intuitive" (when they define direction) whereas they other times do not make much physical sense but are "pseudo" vectors (when they define an imaginary axis about which we rotate).

This is one of those times where simplifications can get in the way.

In more formal contexts, angular momentum is not actually a vector. It's something called a bi-vector. It is the bivector constructed by taking the exerior product of the vector from the axis of rotation to the object and its momentum, $L=x\land p$, rather than their cross product $x\times p$.

However, there's a catch. Exterior products take a while to learn, and the reasons why you would want to use the are rather nuanced. And, very conveniently, in 3 dimensions, for every bivector $x\land p$ there is a corresponding pseudovector $x \times p$ called an "axial vector" for which the equations are identical. You'll do the same operations to manipulate the numbers because the same $|x||p|sin\theta$ term will show up in both sets of math. (this stops being a universal thing that can be done as we go into higher dimensions)

So we teach momentum as a cross product. The price of this is that the meaning of the direction of that vector is kind of murky, as you noticed. It's a whole lot easier to teach, but we lost a little intuition along the way. 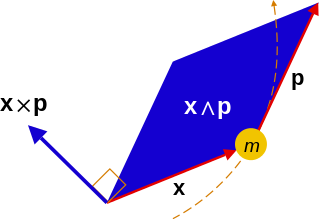 If you look at the way one thinks of a bivector and how we visualize them, the momentum bivector is all within the plane of rotation. You have the exterior product between the displacement between the axis of rotation (clearly in plane) and the momentum of the object (clearly in plane). One thinks entirely in the plane of rotation. The only reason the out of plane vectors ever appeared was because we used the cross product to create an axial vector to represent the deeper bi-vector. If you avoid that extra step, then we never see anything out of plane.

So we teach angular momentum using axial vectors, because it makes it easier to teach. We don't need to teach new operators. However, at a deeper conceptual level, they are more correctly bivectors, and that should help explain why that non-intuitive out-of-plane angular momentum feels out of place... because it is. It's not wrong, just a little troublesome for intuition.

If you apply torque to the outside rim of a bicycle wheel, it spins in the direction of the applied force that is producing that torque. That bicycle wheel acquires angular momentum as a result. If you look at one side of the bicycle wheel, you would say that it's spinning in the clockwise direction. Somebody on the other side of the bicycle wheel would say that it's spinning in the counter-clockwise direction. Thus, the two of you will never agree because you are in different reference frames. This means that something must be defined for the angular momentum vector that doesn't change depending on the reference frame.

What actually is the vector of angular momentum?

It's the mathematical representation of physical rotation. That is, rotation can be quantified by a vector quantity. That's it. There's nothing "real" about the "vector of angular momentum." It's kind of like using complex numbers to represent wave phases. It's just a nice way to encode a real-world relationship into a mathematical model.

The direction of the vector describes direction of planar rotation (right-hand rule) while the magnitude of the vector describes the magnitude of momentum. To speak of angular momentum, imagine two disks of equal size, one made of styrofoam, the other of granite. It will be much harder to accelerate the stone disk than the styrofoam disk. Similarly, once spinning it will be harder to decelerate the stone disk because it has higher angular momentum (due to more mass).

Whenever you see the cross product, know you’re dealing with a second rank antisymmetric tensor in disguise. Second rank tensors acting on 3D vectors can be represented by $3\times3$ matrices, and if that matrix is required to be antisymmetric, that puts six constraints on it, leaving three degrees of freedom to define it. Thus the action of the antisymmetric tensor

So it’s just a notational trick based on the fact that in 3D space (and in no other number of dimensions), rank 2 antisymmetric tensors have exactly as many degrees of freedom as vectors and can be put into correspondence. These pseudo-vectors end up pointing in directions which don’t necessarily mean anything is moving in that direction, and their magnitudes might be devoid of physical meaning as well.

A similar approach can be used with other kinds of tensors, possibly requiring more than one vector to match the amount of information contained in the tensor. This is one way to define the $\mathbf{E}$ and $\mathbf{B}$ vectors in electromagnetism theory, while tensor forms of the laws combine those quantities in a single entity.

Not the answer you're looking for? Browse other questions tagged angular-momentum vectors rotational-kinematics moment-of-inertia angular-velocity or ask your own question.

2
Deviation of free falling objects (Coriolis effect) using conservation of angular momentum
4
Gyroscopic Force/Torque of a Constrained Wheel
20
Can the direction of angular momentum and angular velocity differ?
3
How can angular momentum not be parallel with angular velocity?
1
Where does the energy used to rotate the axis of a flywheel orthogonally go?
3
The moment of inertia of a spinning gyroscope assembly
16
Why should a motorcyclist hit the brakes to make his motorcycle tilt in midair?
0
Can someone please explain Gyroscopic precession?