How do they know which flavor was the neutrino if it collapses into an electron or electron-neutrino?

I read an article that talked about how oscillation of neutrinos worked. It caught my attention that the author of the article mentioned that when a neutrino is measured (by the interaction with nucleus) in a neutrino telescope, independently of it's quantum state, the neutrino would collapse into an electron or electron- neutrino(I don't know if this is true, it's just something I read in an article). If this is true, and all neutrinos collapse into the same quantum state of "electron" and "electron-neutrino" then How do they measure the other probabilities? (tau, muon, anti-tau, anti-muon, etc) Or how do they know they exist?. Thank You, This is something I read, maybe I misunderstood, if so, someone explain me because I'm confused. Thank you

The first detection of any kind of neutrino (Reines-Cowan experiment) was the detection of what we know to be the electron antineutrino that induces the inverse beta decay of many nuclei: $$ \bar\nu_e + p \to n+ e^+ $$ In the $SU(2)$ electroweak theory, the $e^+$ at the end makes it clear that the initial particle has to be the electron-flavor-type, and it has to be an antineutrino, not a neutrino.

They didn't appreciate the $SU(2)$ symmetry at the beginning so they first considered a single neutrino species. This leads to an immediate conflict with the experiments. Muons are known to decay to $\mu\to e+\nu+\bar\nu$ which implies that there has to be a cubic vertex with $\nu$ (the universal one), the muon $\mu$, and the charged W-boson. However, if this vertex existed, one would also predict the decay $\mu\to e+\gamma$: $\nu$ and $W$ appear in the intermediate state before they merge to a $e$ again which may decay to $e$ and $\gamma$.

By comparing the diagram, this $\mu\to e+\gamma$ process should have the branching ratio at least $10^{-4}$ times the branching ratio to any $\mu \nu\bar\nu$ final state. However, the experimental upper bound was soon $10^{-11}$. So the decay to $e\gamma$ just doesn't occur. It can only be prevented if the two neutrinos in $\mu\to e \nu\bar\nu$ are different, and the $\mu \nu_e W$ vertex is set to zero. If that's so, the $\mu$ may split to $W\nu_\mu$, but those can't merge to $e$ anymore – the loop diagram for $\mu\to e\gamma$ requires two different vertices and one of them is zero. That's how the two neutrino flavors prevent the $\mu\to e \gamma$ decay.

A similar logic may also be applied to the decay $\tau\to e\gamma$ although the experiment is much harder to measure.

After some years, people realized that the solar model predicts a certain number of the electron neutrinos etc., and what is detected is lower than that. The oscillations explain the deficit: some neutrinos change to flavors that are undetectable. A similar explanation of a different explanation was in terms of the atmospheric neutrinos.

Various oscillations have been measured more accurately, as a function of the distance etc. Also, new methods to detect the other neutrino flavors were designed. For example, in some emulsions, $\nu_\tau$ may collide and directly produce the $\tau^+$, which is basically a proof that the original neutrino had to be an $SU(2)$ partner of the $\tau$.

A general neutrino may be a superposition of the three flavors, and of the neutrinos and antineutrinos (that's correlated with the left-handed vs right-handed helicity, at least in the so far possible experimental situation in which the neutrino speed is almost the speed of light). The complex amplitudes in front of the 6 possibilities are probability amplitudes that the superposed neutrino will act as a particular flavor/helicity combination. The "collapse" only occurs once we (an observer) actually measure (=learn) which flavor it was, by seeing the products of the reactions.

So it's misleading that the nuclear reaction already "collapses" something. If the nuclear reaction requires an electron neutrino, the reaction will have a zero probability to occur if the initial neutrino is a muon or tau neutrino etc. So only the term in the superposition that corresponds to the electron neutrino will contribute to the reaction. If we measure the information that the reaction took place, we know the result of the measurement of the flavor, and it had to be the $\nu_e$ flavor. If we measure that there was no reaction, it could have been because the neutrino had a wrong flavor; or because it missed the target. If one has lots of neutrinos such that many electron neutrinos would be predicted to hit the target and induce reactions, but if we see no reactions (or fewer reactions), it proves that some of the neutrinos were non-electron neutrinos ("wrong flavors").

Completing the answer by @Motl, here is how one detects a muon neutrino in a bubble chamber, I will address

How do they measure the other probabilities? (tau, muon, anti-tau, anti-muon, etc) Or how do they know they exist 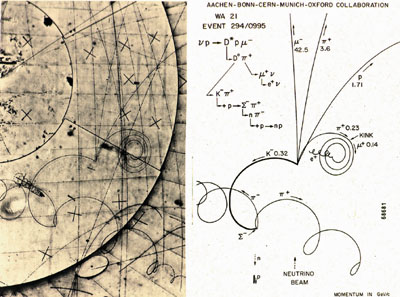 The beam entering is muon neutrinos by construction , and the event has a muon . Lepton number conservation means that the incoming neutral particle is a nu_mu.

In a counter experiment one would have to have muon detectors, or tau detectors. In the Grand Sasso experiment they use a similar technique to bubble chamber photos:

OPERA, in Hall C of the Gran Sasso underground labs, was built in 2003–2008. The taus resulting from the interaction of tau neutrinos are observed in "bricks" of photographic films (nuclear emulsion) interleaved with lead sheets. Each brick weighs 8.3 kg; the two OPERA supermodules contain 150,000 bricks arranged into parallel walls interleaved with plastic scintillator counters. Each supermodule is followed by a magnetic spectrometer for momentum and charge identification of penetrating particles. During data collection, a neutrino interaction and its corresponding brick are tagged in real time by the scintillators and spectrometers. These bricks are extracted from the walls asynchronously with respect to the beam for film development, scanning and for the topological and kinematic search of tau decay

Photographic films, emulsions, are similar in logic to bubble chambers, as in the photo above. The interactions are found and a tau detected by fitting the four vectors of the measured particles of the netrino_tau interacting with a nucleus of the film.

Not the answer you're looking for? Browse other questions tagged neutrinos or ask your own question.

10
Do solar neutrinos actually oscillate between electron, mu and tau?
4
How do we know what the flavour of the neutrino from a beta decay is?