Do solar neutrinos actually oscillate between electron, mu and tau?

I was reading up on the history of the solar neutrino problem, and as far as I can understand it, neutrinos supposedly oscillate from one form to another, thus explaining why there were only one-third the number of neutrinos detected than were expected, when they began neutrino observations in the 1960's.

The Wikipedia article on the topic ends with this statement:

The convincing evidence for solar neutrino oscillation came in 2001 from the Sudbury Neutrino Observatory (SNO) in Canada. It detected all types of neutrinos coming from the Sun, and was able to distinguish between electron-neutrinos and the other two flavors (but could not distinguish the muon and tau flavours), by uniquely using heavy water as the detection medium. After extensive statistical analysis, it was found that about 35% of the arriving solar neutrinos are electron-neutrinos, with the others being muon- or tau-neutrinos. The total number of detected neutrinos agrees quite well with the earlier predictions from nuclear physics, based on the fusion reactions inside the Sun.

But as far as I can see, none of this or anything else I've read seems to give any proof that solar neutrinos change type while en route to the Earth. It seems that the sun just emits about 1/3 of each of the three types.

Or is it that at the temperature of the solar core only electron neutrinos are emitted, and then they oscillate (randomly?) from that type to the others and back again? I'd welcome a little clarity about this.

The thing to understand is how we tag neutrinos for flavor in the first place.

Neutrinos are created and destroyed in reactions that also involve a charged lepton (electron, muon or tau). At vertex level these are $$ W^\pm \to l^\pm + \nu_l $$ and various rotations. The flavor of a neutrino is defined as coincident with that of the charged lepton produced. (I've neglected $Z \to \nu + \bar{\nu}$ reactions here, but these are far off-shell at the energies available in the core of the sun, so they don't contribute.)

The reactions in the sun are fusion reaction that don't have enough excess energy to create a heavy lepton, so the neutrinos must (by definition) be electron-type.

This rule for neutrino flavors can be tested at accelerator where we can generate beams of known neutrino content (because we can count the number and type of hadrons decaying to charged leptons), and when the beam is directed onto a detector very near-by the number of charged-current neutrino interactions of each flavor that we detect agrees with the flavor content of the beam.

But there is more, we can predict the energy spectrum of the solar neutrinos assuming that they are electron-type, and that is the spectrum that we detect. By conservation of energy neutrinos created in concert with heavy leptons (that is, other flavors) would have a different energy spectrum.

Now, the evidence that the theoretical oscillation framework we use is correct is pretty diverse, but some of the very best "one plot" evidence comes from KamLAND, where we plot the flux of electron-type anti-neutrinos from Japanese power reactors as a function of observed energy and compare to the expected $\sin \left( \frac{L}{E} \right)$ behavior (appropriately convoluted to account for the many different distances to reactors). 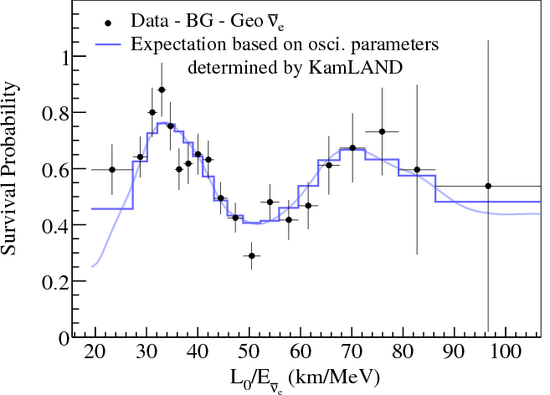 Full disclosure: I was a member of the KamLAND collaboration for about 4 years and am named as an author on the paper from which that figure is drawn.

http://en.wikipedia.org/wiki/CERN_Neutrinos_to_Gran_Sasso Neutrino flavor oscillation is facilitated by passage through matter. They travel hard by lightspeed, but not faster.

Solar core fusion emits two electron neutrinos/helium output. They scramble flavors during passage to the surface, traveling through our atmosphere (a yard of lead at sea level, mass/area), and through rock. Absence of observed neutrinoless double beta-decay validates neutrinos and anti-neutrinos being distinct Dirac fermions, rather than being identical Majorana fermions.

Not the answer you're looking for? Browse other questions tagged particle-physics mass standard-model neutrinos beyond-the-standard-model or ask your own question.

13
Is forward scattering = no scattering?
3
Are the muon/tau neutrinos produced in the Sun? If not, then where?
4
How do they know which flavor was the neutrino if it collapses into an electron or electron-neutrino?

2
Do neutrinos 'become' other types of particles between oscillations?
2
Solar neutrino problem in 1968 and experimental verification of neutrino oscillation in 2001. Why the huge delay?
1
Muon Neutrinos vs Electron neutrinos
1
How do you interpret fluxes derived from Monte-Carlo simulations, specifically neutrino fluxes coming from the Sun
3
Two-neutrino oscillation model - reason for assumption
0
Has it ever been possible to measure the fluxes of $\nu_e$, $\nu_\mu$ and $\nu_\tau$ separately?
3
Are the muon/tau neutrinos produced in the Sun? If not, then where?