I have two separate algorithms (call them "A1" and "A2") which reconstruct the $(x, y)$-position of an event in a particle detector. I can test both of these algorithms on simulated events from a very accurate Monte Carlo of the experiment. Note that A1 and A2 work on different observables in the detector and their errors are not correlated (though the observables themselves are correlated.) There is no systematic bias with either algorithm and so -- in aggregate -- the reconstruction error in $x$ and $y$ is approximately zero over all events.

My question is this: knowing the RMSes and means of the A1 and A2 distance distributions, when I use A1 and A2 on real data, I should be able to find a "best fit" point and put some uncertainty on it. One one hand, I feel like I should just average the measurements and sum the errors in quadrature, but this feels incorrect for some reason (perhaps because the mean of A2 tends to be much higher than the mean of A1).

Is this the correct way to go about analyzing this data? Am I overthinking this?

As explained in the comments, for a given MC event, the errors $\delta x$ and $\delta y$ for the two reconstruction methods A1 and A2 are uncorrelated. Therefore, no extra information is gained by using both reconstructions. We should just use the better one.

Now, what does "better" mean. As stated in the OP, for both reconstructions, the distributions of $\delta x$ and $\delta y$ are Gaussian with zero mean. However, the standard deviations are different. Assuming that for either reconstruction method $\sigma_{\delta x} = \sigma_{\delta y} \equiv \sigma$, the best strategy is to simply pick the method with the smaller $\sigma$. Unlike $\delta x$ and $\delta y$, the error "distance" $\delta r \equiv \sqrt{\delta x^2 + \delta y^2}$ has a distribution which is strictly positive and has nonzero mean.$^{[a]}$ As pointed out in the OP, A1 and A2 lead to two different distributions of $\delta r$, each with its own (positive) mean and variance. Note, however, that the mean and variance of the Rayleigh distribution are not independent (see article linked below), so really you just want to use the reconstruction method with the smaller mean $\delta r$, which is the same as picking the one with the smaller Gaussian $\sigma$ as described above.

Our statement above that we should just use the reconstruction method which has the smaller $\sigma$ critically depends on the fact that A1 and A2 use the same MC data. However, OP mentioned that in the real experiment A1 and A2 use different observables in the detector. In this case, we do benefit by combining the data from both methods, in essence because more data means more information. The question then is how to combine the results. This is actually a really interesting question.

Note that if either of A1 or A2 is much better than the other, you could just ignore the worse one without losing much precision.

$[a]$: For what it's worth, the distribution of $\delta r$ is called the Rayleigh distribution.

To me, using the distance to measure 2 dimensional data is dubious, especially if the events are near to the reconstructed position (supposed 0 distance). Say if the events form a circle (the circle is perfect gaussian). The distribution will not be anymore gaussian since the blue area (in the drawing) will be lesser than the yellow: 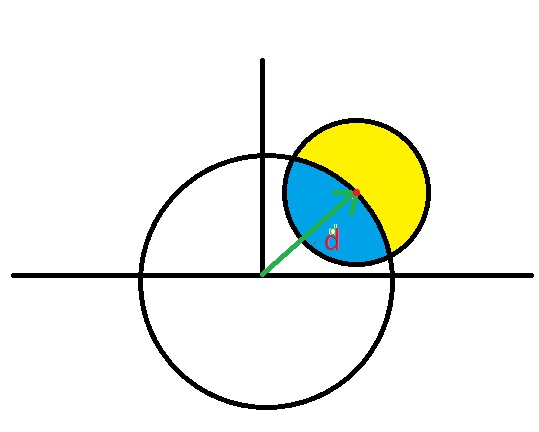 Not the answer you're looking for? Browse other questions tagged measurements error-analysis statistics data-analysis data or ask your own question.

5
Combining uncertainties - multiple measurements
3
A question about error analysis, please help?
0
Propagating asymmetric and large errors in a ratio of likelihood-fit parameters
1
Estimate of the period of noisy "event counting" data
2
Uncertainty in ripetitive measurements
6
How to incorporate the uncertainty of the model coefficients in the prediction interval of a multiple linear regression
0
Uncertainty from variable to derivative in data fitting