Do bosons and fermions produce the same interference pattern in a double slit experiment?

The double-slit experiment is a one-body experiment, meaning that one is only looking at interferences of one particle with itself. Thus the Bose or Fermi statistics does not play a role in that case.

What the OP has in mind in the Hong-Ou-Mandel effect, which for bosons implies that there is an increased probability that two identical bosons will be detected in the same detector, and an anti-correlation for identical fermions.

There is an interesting detail about the intensity distribution behind edges from photons and electrons. The shadow from photons is smaller the "geometrical" shadow. The shadow behind an edge, built from electrons is always wider than geometrical shadow. This could be explained by the interaction between the electric field of the sharp edge (the surface electrons of this edge) and the particle beam.

In the case of photons the photon has an oscillating electric field and in dependence from the phase of the oscillation - (1) the positive pole or (2) the negative pole is nearer the edge, or (3) the magnetic field component is prevailing - the photon is deflected (1) towards the edge (2) away from the edge or (3) is undeflected. The first intensity maximum is exactly on the line of the geometrical shadow.

The deflection of electrons is different. Electrons have their electric field and get deflected away from the edge by the electric field of the surface electrons of this edge. The edge is wider the theoretical shadow. But the position and the width of the intensity distribution of electrons could be manipulated. Gottfried Möllensedt and Heinrich Düker have done such experiments (Beobachtungen und Messungen an Biprisma-lnterferenzen mit Elektronenwellen. In: Zeitschrift für Physik. Nr. 145, 1956, S. 377-397.) I'm sorry. It's in German. Here are two pictures from the original work: 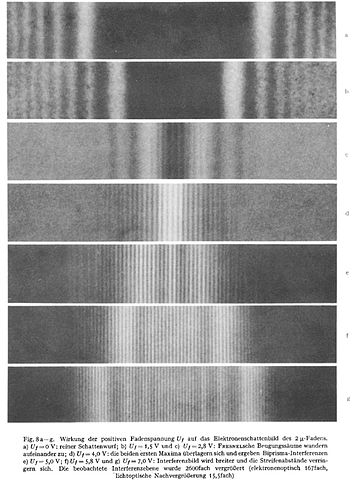 Different intensity distributions in dependence from the electric potential difference between the wire and the ground.

Not the answer you're looking for? Browse other questions tagged quantum-mechanics quantum-spin double-slit-experiment interference identical-particles or ask your own question.