Why is it said that standing waves do not transfer energy?

Standing waves are always the result of the interference of two (or more) waves. E.g. in a rope or a string: the interference between a wave and the reflected wave (when the first wave reaches the end of the rope, it reflects) travelling in the opposite direction, as can be seen below. It is interesting to notice, however, that both these waves have the same frequency.

If this situation appears in an infinite rope, standing waves always are the result. In finite ropes (which are more common in musical instruments and the reality in general), standing waves only occur if there is a clear relationship between the length of the rope and the wavelength.

The reason it is said that no energy is transferred, is seen in looking at a single point on the rope. The energy stored in the vibration is $\frac{1}{2}m\omega^2 A^2$. Since the frequency of the vibration ($\omega = 2\pi F$) and the amplitude ($A$) is constant for each individual point in a standing wave, the energy for every point remains constant.

As standing waves only occur if the frequency of the two travelling waves are equal and if certain conditions are met (relation between length of rope and wavelength), the fact that the two waves travel in opposite direction is not sufficient.

So standing waves result in a violin string from moving a bow across the string. As explained above, the energy in a single point of the string in a standing wave is constant. Or it would be, if energy would not be lost (transferred) to the air around the string due to air resistance

Instruments can be heard because there are leaks of energy: the "standing" wave would'nt stand infinitely (without new input of energy). For cords intruments, a bit of energy diffuse via friction with air, but most diffuses via the cords end then conduction to the main bed then large communication of motion to the air (then up to your ears).

But within the cord, there is no neat transport in one or the other direction. Your guitare is not pushed away (or is pushed in opposite directions at the same time) :-)

To say that standing waves - like in strings of a violin or like the resonance of a bell - are not transferring energy is a rough approximation and not holdable in reality.

To prevent this you can use a rigid but elastic rod an hit this rod uniformaly on four points:

But even for this not fixed on the end rod the vibrations will fade out fast. Below the rod you see the cross-section of the rod. The higher the tension the more the rod has a nearly eliptical cross-section, this produces internal friction and heat losses.

While the issues of radiation (e.g. energy transfer to air or to supports and hearing the sound of a vibrating string) and imperfections (energy lost by dissipative effects) are both answered above, there's no reason to exclude energy transfer WITHIN each segment comprised between two nodes (or anti-nodes) in a standing wave. These are the points of a standing wave through which there's no energy flow.

You can do the same calculation for a standing electromagnetic wave by taking the time average of the Poynting vector to find zero average power transmitted.

You may conclude this by thinking that the standing wave is actually the superposition of two travelling waves which were moving in opposite directions, so the energy transferred by a single wave in one direction is completely compensated by energy transfer in the opposite direction. This keeps the total energy (sum of potential and kinetic energies) of every particle in the standing wave constant (read 'particle' as differential segment of length $\mu dx$, where $\mu$ is the mass per unit length of the string).

A further insight might be brought by observing that propagating waves are 'propagating' because each segment of the string propagates its disturbances (momentum, energy) to the neighbouring particle.So if we stop furnishing energy, displacement at the initial position stops and the wave moves further as energy keeps getting tranferred in the direction of wave velocity. However, in the case of standing waves (ideally speaking) you do not need energy to sustain the motion at any point. The energy is kept within the already oscillating string segment, exactly why a standing wave does not 'travel'.

When there are no energy losses, two waves of equal frequency and amplitude but travelling in opposite directions interfere to produce pure standing waves. In the following animation, both red and blue waves are identical except that red wave travels from right to left whereas the blue wave travels from left to right:

Image source: Wikipedia but I copied it from this answer.

In this ideal case of zero energy looses, it's true that no energy is transferred from one end to the other end. There are a lot of ways to explain this. One has been specified in the question itself - as the travelling waves carry equal energy but in opposite directions, there is no net transfer of energy. This is also supported by symmetry. If the energy flows from left to right, then why not the other way round?

In reality, however, energy is lost to the surroundings through various means as pointed out in the accepted answer. And you're right that without the loss of energy (in the form of sound energy) from the string you can't hear anything from your stringed instrument. Energy losses are also the reason why the vibrations in the string dampen out. 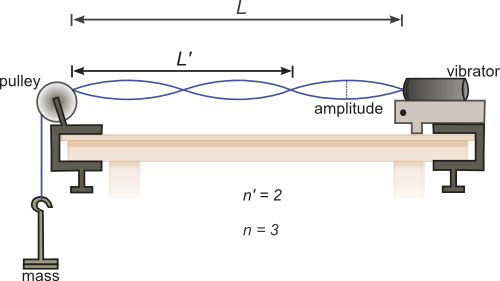 It seems that when the energy loss is non-zero, as in the case above, there exists another travelling wave component from the source in the direction away from it, to counter the losses.

The following illustration will be a rough analogy to 'no net transfer of energy' from the source: 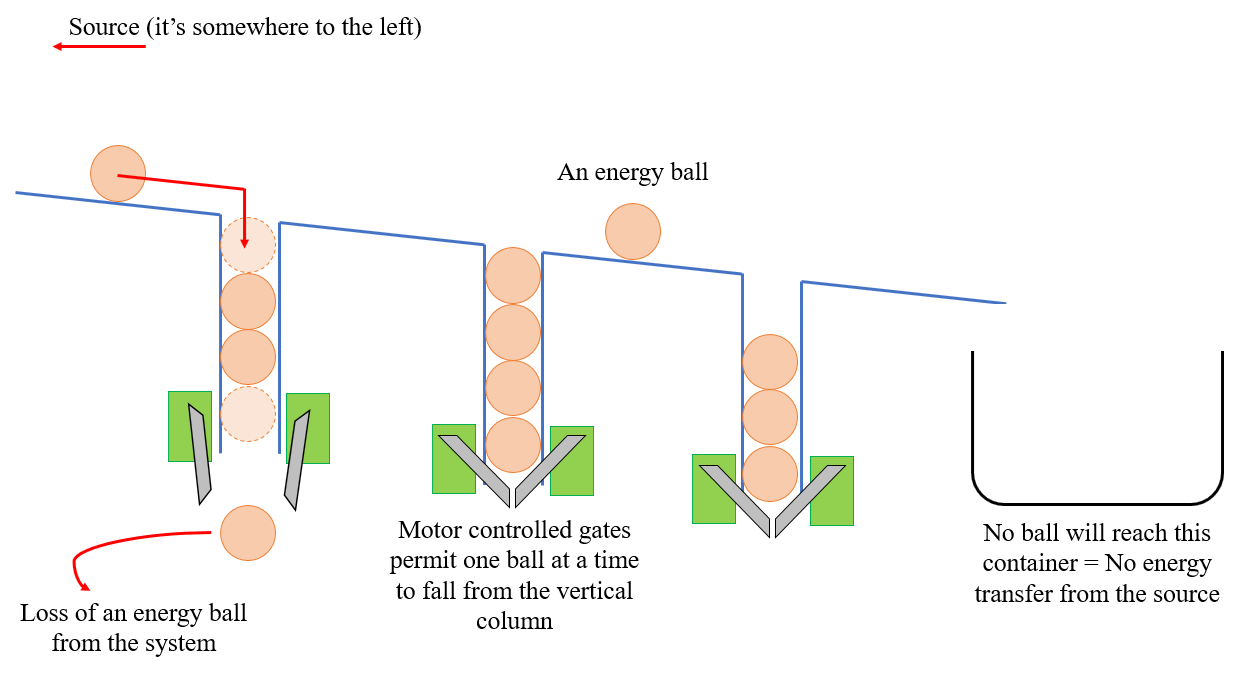 'Energy balls' roll from the source towards right along the inclined plane. There are three vertical columns which can hold a maximum of four 'energy balls'. The motor controlled gates open and close at some time intervals and permit one ball at a time. When all timings are perfect no ball would reach the beaker placed at the right end of the slope. But the number of 'energy balls' in the columns would remain almost fixed.

It is now a simply excercise to calculate the Poynting vector for the standing wave of your choice to convince oneself that it does not transfer energy.

Similar equations exist for the (linear) waves of any nature: elastic, waves in miquids/gases, etc. In fact, that the standing wave does not transfer energy can be taken as a definition of the standing wave.

Remark more precisely, it is the flux averaged over the period or the wavelength if the wave that is zero. The local value of the flux however also oscillates.

Not the answer you're looking for? Browse other questions tagged energy waves continuum-mechanics or ask your own question.