How do levers amplify forces?

This is really bothering me for a long time, because the math is easy to do, but it's still unintuitive for me.

I understand the "law of the lever" and I can do the math and use the torques, or conservation of energy. or whatever... And I can see that a lever can amplify a force you apply to it if you apply a force on the longer side of the beam.

p.s I'm looking just for an explanation in terms of forces and acceleration, it's clear to me how to do this in terms of energy or torques

I agree with Benjamin Franz that the ball-and-spring model of a solid is helpful and that when a solid exerts a contact force the bonds between the atoms are distorted in that region. If you take a beam, clamp down its ends, and then apply a force to it off-center, the bonds on the short side are distorted more than the bonds on the long side. Therefore, more force is exerted on the clamp that is closer to the applied force. The diagram below illustrates this:

Even though @Noah's answer provides some insight, I would have to disagree with the statement that "the bonds on the short side are distorted more". The "net" distortion is probably the same on each side.

I will provide a similar figure to @Noah's. There are two black rectangles, that would represent the two weights, but for now let's assume they are rigid. They are also at the same height with the same dimensions. 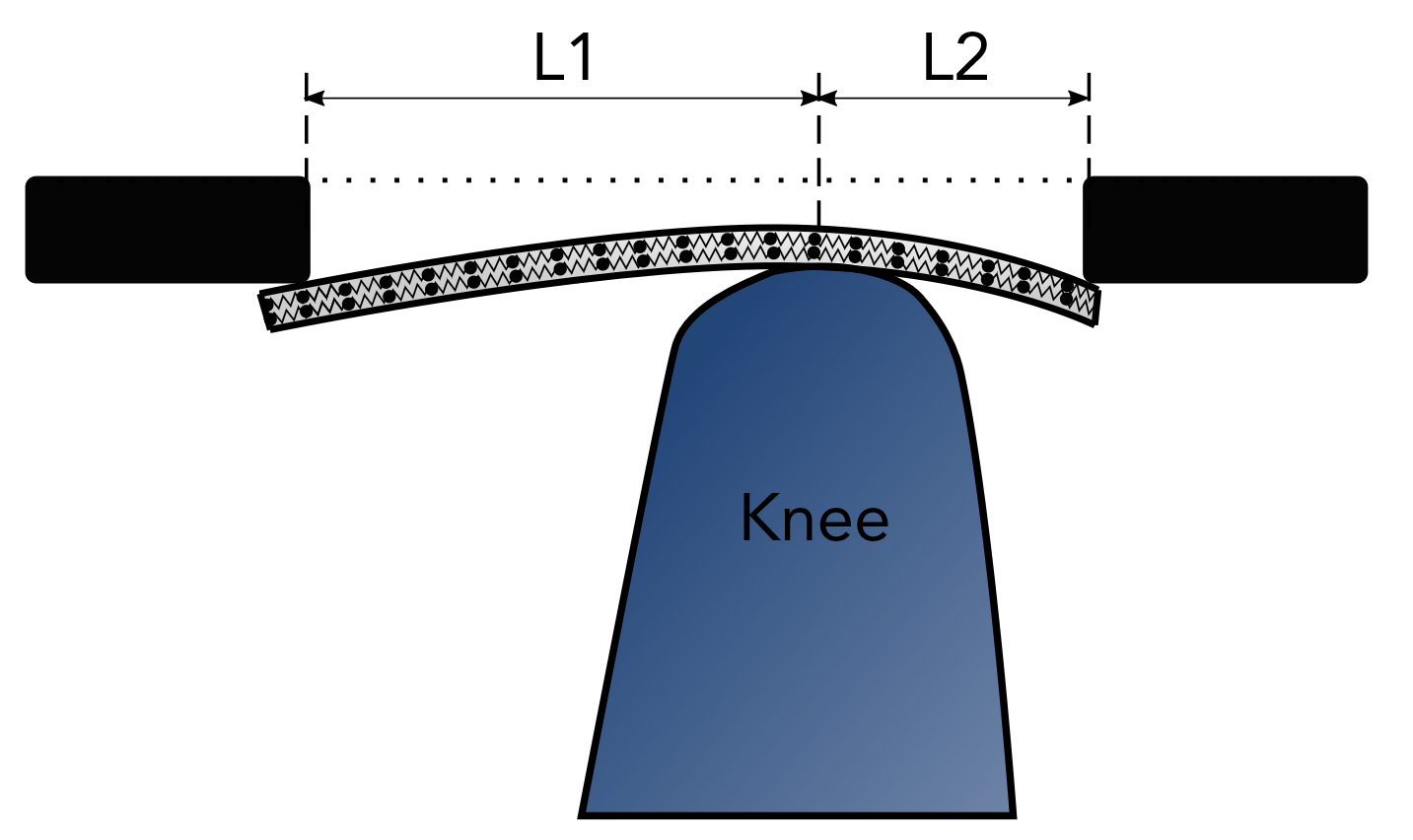 As you press the rectangles against the beam, the knee (fulcrum) will prevent translation so deformation will occur at the tips. Assuming we keep the same height between the rectangles, the vertical deformation at each of the beam's tips will be the same. 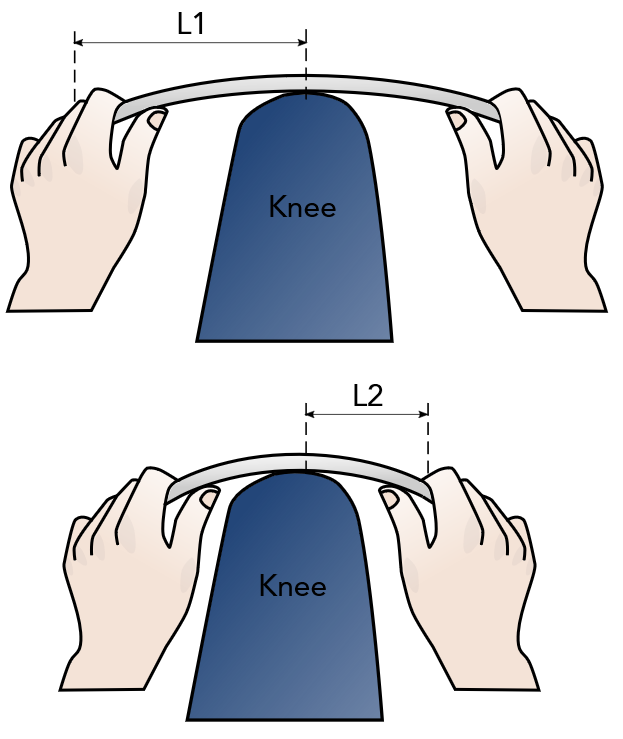 If we think in terms of weights instead of two black rectangles, you can now see why a small force at the tip of L1, would require a larger force at L2 to balance out the system, deforming the same amount at each end. In a typical real-life situation the lever would not be as deformed. Nevertheless, the bending action and inherent geometry of the lever still explains this phenomenon.

There are two fairly straight forward ways to understand this:

We will, for simplicity, consider the situation where the lever is essentially horizontal (showing that the results hold at other angles is left as an exercise), and will treat the lever as a straight bar of length $l = l_1 + l_2$. Three forces act of the bar, the applied force $F_a$ acts downward atdistance 0, the fulcrum force $F_f$ acts upward at distance $l_1$, and the load $F_l$ acts downward at distance l.

Note that so far I have not said anything about the ratio $l_1/l_2$.

Immediately we can see that the system is underconstrained and we have one free parameter; that the weight of the load, so we'll express $F_a$ and $F_f$ in terms of $F_l$.

The best case is that the machine wastes no energy; we assume this case.

By assumption these must add to zero, so

The problem presented itself to me a long time ago as "How does the weight hanging from one end of a horizontal rod know how far away are the pivot and the other weight?" This, I found, could be answered only by allowing the rod some thickness, in which it could have an internal structure.

Using an structure consisting of a pin-jointed lattice of struts and ties, the law $F_1x_1=F_2x_2$ emerges simply by applying the force equilibrium condition at each pin joint.

I attach a simplified (possibly over-simplified) version of the argument. 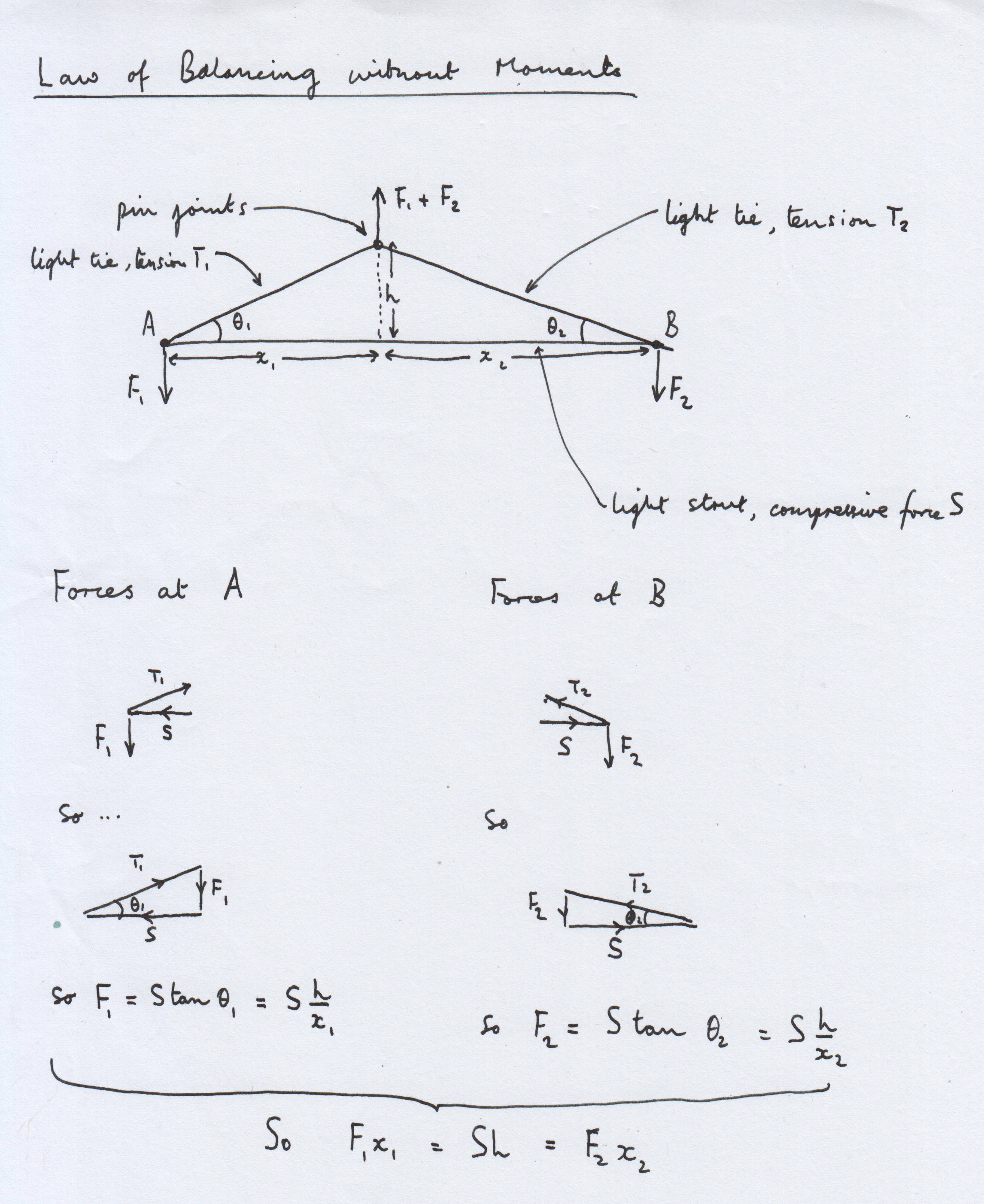 This may be criticised because I have given the two sides of the rod differently proportioned structures. The argument works very similarly, and yields the same result, if there is the same lattice structure both sides of the pivot, only more units of the lattice on the long side of the rod.

I take dmckee's answer to be flawed because it doesn't mention the earth.

At the coarsest level, the earth accelerates down while the large object accelerates up. At the level of Newtonian mechanics, every action has an equal and opposite reaction.

In more detail, the center of mass of the earth, the fulcrum, the lever, the person who pushes, and the large object, taken together as a single composite system, stays motionless (or, rather, at constant velocity), but the positions and velocities of the five internal components relative to each other are changed by the actions of the contact forces (which we can take ultimately to be non-contact gravitational, electromagnetic and nuclear forces, and an understanding of the constitution of matter does ultimately require QM) that act between them. At this level of modeling, the earth's acceleration (in the model) will be slightly different (and the same as the acceleration of the fulcrum), because part of the person who pushes is also accelerating downwards, and the acceleration of the various parts of the lever would have to be taken into account.

At increasing levels of detail, each of the five components is also composite. I can bend my arm to exert a downward force because I can adjust the internal geometry of my arm relative to another part using chemical energy (which again we can take to be ultimately electromagnetic and nuclear energy, and QM).

Although you tagged this QM, it can be understood moderately well in terms of classical mechanics and EM. The constitution of matter was a concern for late 19C Natural Philosophers, but everything was enough under control that they barely noticed that they were sweeping troubles under the carpet until Planck.

Not the answer you're looking for? Browse other questions tagged newtonian-mechanics forces torque free-body-diagram or ask your own question.

6
How does a lever magnify force?
3
Proof of the Law of the Lever
2
How does hydraulic press work at molecular level?
0
What happens inside a lever and the ease of opening a door

0
Angular equilibrium on a see-saw
0
Force needed to lift a hinged slab/lever?
15
Why does it seem everything I push moves at a constant velocity?
3
How do we account for the non-net accelerations for forces in static systems?
0
How exactly do simple machines provide mechanical advantages?
2
How is force transmitted across a body?
2
Why is torque assumed to be constant?
0
What happens inside a lever and the ease of opening a door