Why didn't the glass break?

In the figure below, a needle has been placed in each end of a broomstick, the tips of the needles resting on the edges of filled wine glasses. The experimenter strikes the broomstick a swift and sturdy blow with a stout rod. The broomstick breaks and falls to the floor but the wine glasses remain in place and no wine is spilled. This impressive parlor stunt was popular at the end of the nineteenth century.

What is the physics behind it?

This is similar to the classic example in Halliday and Resnick (or at least, it was in the Great Eggplant version), where there are two sections of rope, identical material, one tied to the ceiling, then to a mass, and the other hanging from the mass. 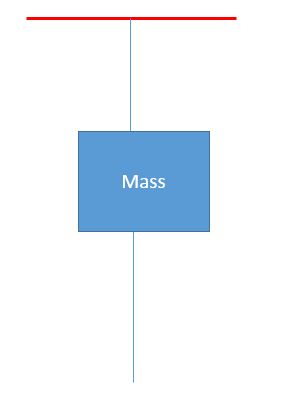 If you pull slowly and firmly, the combination of your pull and the gravitational force $Mass*g$ will cause the upper rope to break first. If you pull with a sudden strong jerk, the lower rope will break because it can't withstand the peak force.

EDIT: here's a photo of an experimental setup to accompany that H&R discussion: weights and ropes . As Owen B mentioned, inertia plays a key role here. Backtrack from that link to find the section of H&R of interest.

My money's on the same thing in your case: the rod shatters before it can transmit the force of the blow to the glasses.

If you strike the broomstick sharply enough, the ends of the broomstick actually move up, not down. When the broomstick breaks, each broomstick piece rotates about the center of its mass, which is in the middle of that piece. So for each piece, the end at the breaking point moves downward, but upward on the other end.

Well, one part of the answer is undoubtedly the fact that wine glasses, or indeed glass bottles, are actually extremely strong. The fact they are also extremely brittle tends to hide this fact. So the pressure being exerted on the glass itself is obviously not enough to break it. This is due to the major pressure being the centre of the broom stick which acts as a kind of reverse lever. It also bends and hence limits the shock transmitted to the glasses.

when a person hits a broomstick, the direction of the force F applied is vertically downwards. according to 3rd law of Newton, there would be an equal and opposite reaction. so in this case the broomstick breaks into two parts, each part having a torque equal to the force F and moment arm (1/2 length of the broomstick)thus not touching the wine glasses as the torque tends to rotate the broken pieces away from the glasses. and lastly the broken pieces fall down with some precise angle i.e produced by torque.

Well, the fact is that the needle lies atop the edge of the glass, and aas a rod stikes at the middle of the broom, a vertical component of force, acts on the needle, mind you, there is no horizontal vector, the needle produces a normal force, so in the end, no force is actually transmitted to the glasses. However a the strike has to be quick and powerful lest shockwaves are produced, and the needles don't produce a sufficient normal force to break the rod.

Not the answer you're looking for? Browse other questions tagged newtonian-mechanics home-experiment or ask your own question.

31
Why does a cork float to the side of a glass?
4
Does the pressure increase under an upturned glass?
8
Why does glass absorb infrared light?
4
Why didn't I beat the avalanche?
0
Will the water stay in a falling glass?
8
Why the rubber ball bounced higher than the glass ball?
3
Pitch of sound in half fill glass
1
Why does the glass move?
2
Why didn't the pen bounce up when dropped for the second time?