Does the pressure increase under an upturned glass?

During my children's bath time we were playing with an upturned plastic jug filled with water and making some plastic divers float up inside the jug - see image. 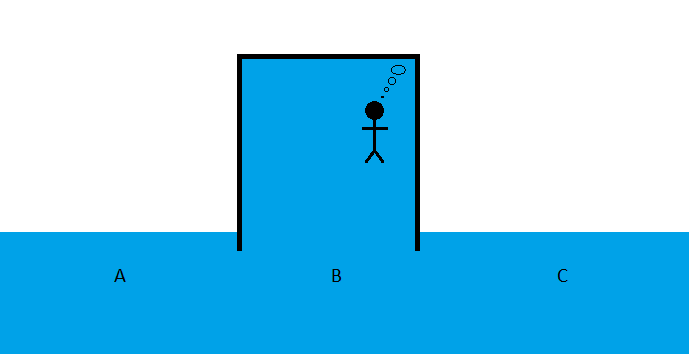 If one of the divers swam from A to B to C, would the water pressure on them remain constant? Or would it increase at B because of the higher column of water above?

The pressure at A, B, and C are the same.

Think of this another way. If the pressure at B were higher than at A and C, then the water at B would flow to A and C. Since the water would be still if you waited for the waves to die down, all the water at the same height is at the same pressure.

Not the answer you're looking for? Browse other questions tagged water pressure home-experiment or ask your own question.

0
Why does an object when filled with water sink, but without water inside float (in a body of water)?
9
Water under high pressure
2
Simple home pressure experiment: how to understand the dependence on the glass opening?
3
Where would a perfect sphere break under pressure?
1
Why wouldn't an increase in steam pressure force water out of a chamber faster?
5
Under water light reflection of air in a cup vs water in a cup
0
Why does the water level in a resonance tube increase/decrease as we alter the height of the water reservoir?
3
Height of fluid and pressure
1
Effect of increased air pressure on water pressure in sealed container