Questions on the movie Gravity (2013)

To start off, I'm not a physicist but a programmer, and only had a few years of physics education in high school so I'm sorry if I'm asking a stupid question.

I just finished watching the movie Gravity (2013) and I found online already a whole list of things wrong with the movie, but there are two things that I think is wrong that I couldn't find:

The ISS orbit is free of large satellites. So the fictional one from the movie was in a different orbit. Therefore it's not too difficult to believe that debris from it would have a high relative velocity. The debris might have been in a very elliptical orbit with a large range of altitudes.

It's not even necessary for them to have different altitudes. As long as they intersect at an angle, the relative speeds will be very high. (Much higher than would be useful for a movie).

That doesn't mean that the action depicted in the movie was accurate, just that any intersection would likely be at very high closing speeds.

If the other space station had been hit by debris, it would have been damaged. High-speed impacts can't change the momentum of the entire station much. The material gives way before forces build up much, and the interaction time is low.

Deorbit happens over a much longer period of time due primarily to atmospheric drag.

Is it true that debris can stay in orbit at the same height as space stations, while having a very large relative speed to the space stations?

Most LEO objects orbit in the same direction, namely the direction the Earth rotates. This is done to take advantage of the initial speed supplied by the Earth's rotation. So the main velocity difference would likely be due to different inclinations (i.e., not in the same plane) or elliptical vs. circular orbits.

Let's make it simple and assume that two objects, E and I, both have circular orbits at the same altitude, thus they have the same orbital speed. However, let us assume object I has an inclined orbit at some angle $\alpha$ to the equatorial plane and that they orbit in the same azimuthal direction.

Note: I really should be doing this in spherical trigonometry, but let's only concern ourselves with the immediate region of interaction so we can take the limit as the radius of curvature goes to infinity.

So the short answer to your question is yes.

Is it possible for the intact station to deorbit, simply by getting a little bit hit (it couldn't have been much since it was still mostly intact)?

I am going to guess no because of my response to the previous part. A space station has a great deal of linear and angular momentum. To exert enough force and torque to change those would require high impact speeds. Since most of the space station's outer hull is very thin, the end result would not be the entire object being "shoved" to a different altitude. Rather, the impacting object would probably just tear through the station and/or ablate on impact.

These values correspond to Mach ~ 10-12 at sea level. For comparison, the muzzle velocity of a bullet from a high powered rifle varies from Mach ~ 1.8-3.6, depending on the caliber and model.

I am inclined to think that were this situation to really occur, a human would not be able to see the incident objects unless they were very large because of the lighting conditions and the speed at which the objects were moving.

A more accurate portrayal would have shown parts of the space station just disappearing and/or exploding. There would not have been the nice, slow moving objects flying by that destroyed everything.

When we look at the full range of muzzle velocities from a list of cartridges, we find handguns/pistols range from ~304–515 m/s and rifles range from ~600–1392 m/s. I plotted the relative speed between two orbiting objects as a function of inclination (i.e., Equation 4 above) shown in the following image. 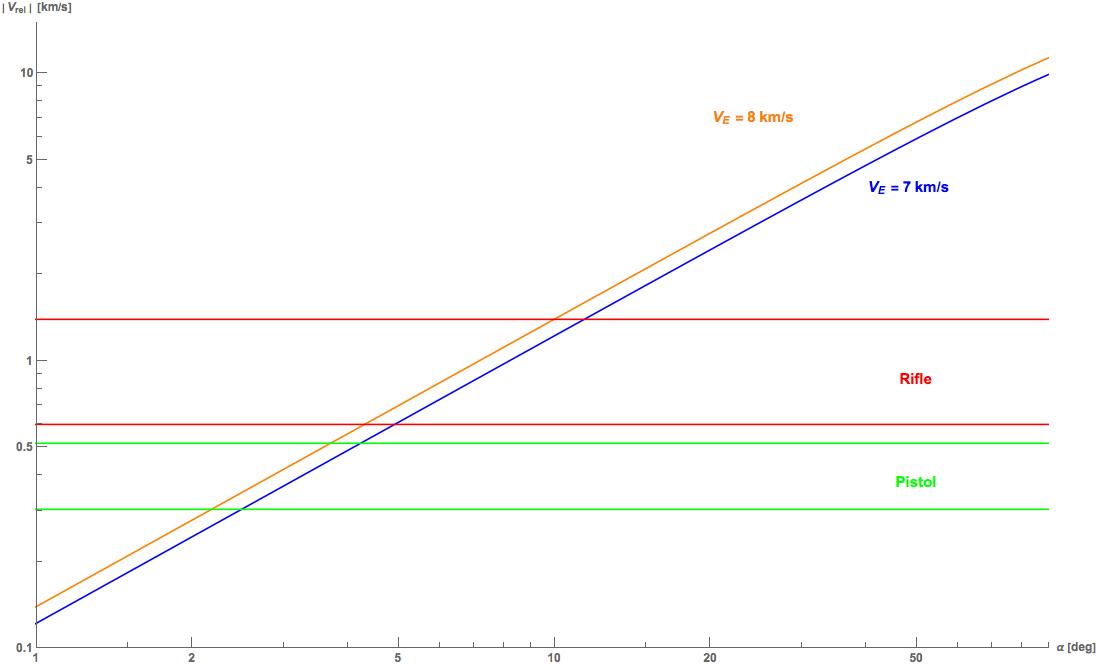 As shown, after even only ~3-4 degrees the speed differences exceed most handgun round muzzle speeds and after ~11 degrees nearly all civilian rifle rounds.

I'm not an expert either, but here are my thoughts.

Not the answer you're looking for? Browse other questions tagged newtonian-mechanics angular-momentum orbital-motion satellites or ask your own question.

5
Is it plausible that the explosion of a satellite in an orbit 65km above the ISS will not threaten the ISS?
1
Is the weapon from GI Joe: Retaliation possible and accurate?

1
Projectile Motion with air Resistance - Adjust only the Angle to hit a target
5
Changes in planetary orbit?
0
Newton's gravity formulas for ellipses
1
Questions about the velocity of the center of gravity
1
Analytic solution to the Kepler problem from position + velocity initial conditions
1
Does a non-rotating satellite always show the same side towards the main body?
5
Is it plausible that the explosion of a satellite in an orbit 65km above the ISS will not threaten the ISS?