I hope this is not a stupid question, but has the particle pattern of a double slit experiment actually been observed or is it just in theory?

I'm curios to see this particle pattern when the photons are being observed.

Double slit experiments have also been carried out with other types of particles, even quite large organic molecules, so the theoretical idea has been substantiated again and again by experiment. I haven't checked but I suspect there is a practical limit on how large the objects can be before interference effects become negligible.

For decades in my college physics lab, I would shine a laser beam on a mounted double slit on a long, wall side cabinet, in a darkened room. Students could place their notebooks against the wall at the end of the cabinet, and circle the bright spots in the easily visible interference pattern which was several inches wide. (Each bright spot was painted by billions of photons.)

No. What you see in those pictures is the actual impact of the real thing on the experiment's detection screen. Interference fringes are actually recomposing themselves, one photon at a time.

Yet another example for the record : 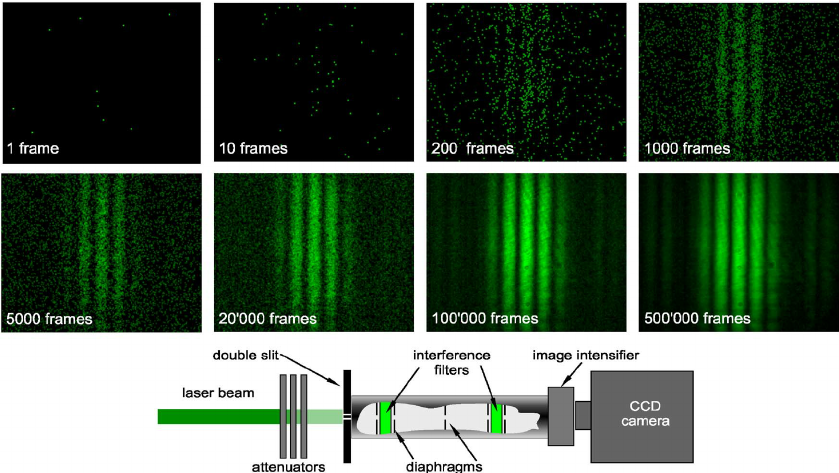 If you don't alter the system, you may wait any time you want between each firing of a photon, the interference figure will emerge. The commonly accepted explanation of that phenomenon is that each particle expresses one of the potentialities of the photon field, and that every one of those potentialities has to actually happen according to the probabilities that are attached to it in the mathematical model.

This is why, in the above picture, you see individual photons "magically recomposing" the typical pattern (interference fringes). There is no need for "recomposition" and there is no "magic" as soon as you consider that the very same field is excited every time, and that field is behaving according to its (probabilistic) nature.

Metaphorically, if one photon particle was an answer, the field would be the person speaking. Wishing that the particles exist by themselves, without considering the field, compares to according a real existence to a sentence, without looking at the fact that there is a person speaking.

It is as relevant as trying to understand the rules of Bridge by tearing a deck of cards after the game.

I'm curious to see this particle pattern when the photons are being observed.

It's not possible to do this. As the double-slit experiment itself demonstrates, it is impossible to "observe a photon" when photons are producing this "pattern" : whenever one detects through which slit the particle went, interference fringes cannot be observed anymore.

This phenomenon is accounted for by Heisenberg's "uncerttainty principle" : we cannot know both the position and the momentum (mass, speed, and direction) of the particle at the same time. As from the moment we're observing at which slit the particle is passing through, we know its position, and because of the interaction that this very observation implies, its direction is undetermined.

Look at what the observation is causing to the experiment in the following popular science video (at 7:00) :

So, if you observe that typical pattern of interference fringes, you don't observe individual particles directly, and vice-versa.

The unexpected result of the double-slit experiment has had theoretical physicist argue for almost one hundred years about weird and misleading concepts like "spooky action at a distance", "particle-wave duality", "wavefunction collapse", etc.

Bring this altogether with the fact that original Quantum Mechanics was incompatible with Einstein's Relativity, and you'll feel a bit of the pain modern physics did endure to be born.

Today, it seems that scientists have overcome those apparent contradictions of Quantum Physics in a quite recent edifice called Quantum Field Theory : https://en.wikipedia.org/wiki/Quantum_field_theory

According to QFT, particles are not the ultimate reality, they are the momentaneous expression of a more perennial, albeit fundamentally probabilistic, natural phenomenon called quantum fields.

Those seem to be able to account as well for waves as for particles, as well for Special Relativity as for what happens in double-slit experiments.

As an experimentalist and by default a realist those interference patterns are also produced by atoms and molecules scattering off another atom or molecule. The diameter of the atoms or molecules correlated to the diameter of a double slit. At a certain velocity these particles can be represented as a wavelength. Key here is “represented “, the particle is real, localized and not some field or wave equation that extends to all of the universe or needs to collapse. These mathematical constructs allow for calculating where the particle can be found. The result is finding these particles in equally spaced bands concentric circles much like a pinhole interference setup. The benefit of such scattering experiments is that both beams display the interference pattern. The question that should be asked what is the real and physical process that provides for these bands and not a continuous pattern. Quantum theory, notice no field or mechanics is stated. Quantum theory is all about quanta. When atoms are scattered off each other only a quanta of energy can be exchanged. This simply means that atoms can only scatter at certain integer angles resulting in the “interference pattern”. So yes these interference bands have been “observed”.