How power lines use high voltages with a low current?

I've read that power lines use high voltages and low currents to reduce power loss due to resistance. Looking at the formula for power -

So to increase P, you increase V rather than I for efficiency, which makes sense. The formula to calculate voltage though is -

How do power lines use high voltages and a low current when a high current (or high resistance) is needed for a high voltage? 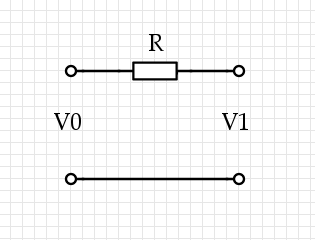 Some current $I$ flows through the top wire, it causes $V_1 = V_0 - I R$. Now there are three voltages we're talking about, and they're all very different: $V_0$ on the left, where the power is coming from, and $V_1$ on the right, where the power is being used, and $I R$, which is the loss through the lines. (We could also use two resistors of resistance $R/2$, one on each side: it doesn't change a thing.)

Okay, that's cheating and if you think too much about DC transmission you're going to struggle with it: "after all, the current that's flowing is only flowing because of some resistance placed across $V_1$ and if you don't configure things just right with $R$ then you have the wrong voltage and things explode, so do we even really have that tradeoff? We'd need to create a voltage-reduction circuit and in DC that usually means some resistors in series adding to $R$," and so forth. It gets across the most important part of the idea which is where the resistor is, but it lacks true force because it's not AC current. For AC current, you need a transmission line. For all of this, you need multi-variable calculus and partial derivatives. Sorry if that goes over your head.

The simplest generic transmission line looks like this: divide the length $L$ of the line into segments of size $\delta x$, then model them each as an L-R-C circuit: 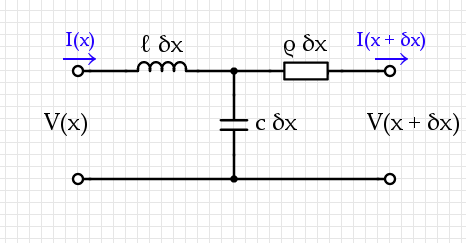 The loss of voltage from $V_0$ to $V_1$ comes from $\rho$ and is a transmission loss. This is different from the value $V_1$ which can certainly be used to extract power. Hook up a resistor on the other end and measure the power output through that resistor: while holding this constant, you discover that the proper way to lose less energy is to use higher $V_0.$ I'm pretty sure that this applies even if we add a transformer to "step down" the output to a constant voltage.

In general, be careful about plugging equations into each other just because they have the same letters. You can do that in math, since $x$ will mean only one thing in a math problem, but a $V$ (or an $F$, or an $a$, etc.) in a physics equation could mean tons of things.

Voltage is a measure of the electric potential difference across two points in a circuit. It may be considered the work done to transport an electric charge. Power lines are made of thick easily conductive material in order to minimize resistance and power loss to heat. But resistance within power lines is fixed, and power is delivered through the line according to this formula:

P is power; V is voltage; Q is electric charge; t is time; I is current (charge per unit time)

Because R is fixed, you can deliver a given amount of power using either greater current or more voltage. But because high current results in more power lost to resistance in the power lines, transformers are used in high voltage power lines to step down the voltage. Between the transformers, high voltage in the lines delivers electric power with less loss than if high current flowed through the lines.

When current goes through a "step-up" transformer, the voltage is increased and the amperage is decreased, due to conservation of energy considerations. Taking advantage of this, the power company generates 1000 A of current at 120 V (it's actually different than this, but assume this for the sake of the argument), runs this current through a step-up transformer to convert the current to 120,000 V at 1 A, and sends the power to the neighborhood. At the neighborhood, a step-down transformer converts the power back to 1000 A at 120 V (assuming no loss) and each individual house uses a portion of that power. Due to this power distribution method, very low electrical transmission losses are incurred because a very low current was transmitted to the neighborhood.

Wire resistance causes losses in power supply transmission. If you keep resistance constant, losses are linearly proportional to the square of the current. So if you double the voltage for the same power you have half the current and power dissipation is effectively half for the same power. Another reason is weight. In order to transmit more current and keep losses in control one would need a bigger wire with a larger cross-sectional area.

The thing you are missing is that there are two parts of the circuit – the transportation wires and the load. Since they are separated by a transformer, Ohm's Law does not apply between them. Imagine this pseudo-circuit:

First a hand-wavy explanation, then we can do some math: We need to transport a fixed amount of energy to the transformer, i.e. the amount of energy the load is consuming. Thus $P_T=I_2V_2$ is constant and the more voltage we bring to the transformer, the less current we need. The power dissipation across the wire is $P_a=I_2(V_2-V_1)=I_2^2R_a$, where we used Ohm's Law with $(V_2-V_1)=I_2R_a$. Thus higher voltage means less current means less power dissipation. 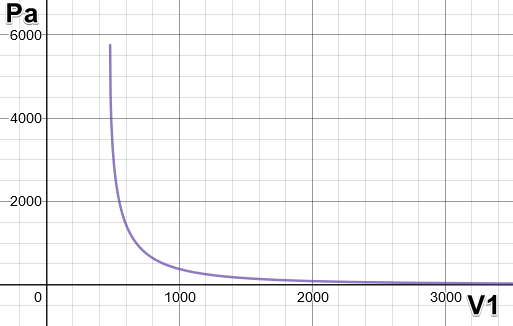 This plot clearly shows how increasing $V_1$ reduces the transport loss in the wire.