In a Fundamental of Quantum Optics and Quantum Information book which I am reading, it states without explanation that, in a two-level atomic configuration in a cavity system, the

Could you tell me how to derive the relations of both atomic Hamiltonian and cavity field Hamiltonian? 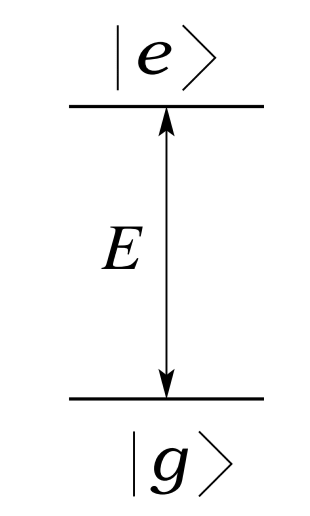 P.S. I apology for the image. I can't find a way to zoom it out.

As said in the commentaries, the first one comes from the Dirac formalism. Simply put, it deals with quantum states as vectors $\lvert a \rangle$ whose components contain the projections of the system into different eigenstates. For a system, the set of state eigenvectors $\lvert a_i \rangle$ must be linearly independent $\langle a_i \lvert a_j \rangle=\delta_{ij}$ which is the inner vector product, and is equivalent to $\int \psi_i \psi_j dx^3$. And then there is the transition or projection operator, which results from outer vector product $\lvert a \rangle\langle b \lvert$ and yields a matrix characterizing the transition between states. Finally if you have an operator $\hat A$, represented by a matrix, you can find its components like $\langle a \lvert \hat A \lvert b \rangle$, where is easy to see that when expressed in terms of its eigenvectors, all non-diagonal values are zero and the diagonal contains the eigen values ($\langle a_i \lvert \hat A \lvert a_j \rangle$ = 0, $\langle a_i \lvert \hat A \lvert a_i \rangle= a_i$)

Now the case of the atom is similar to the harmonic oscillator, and basically that of any system dealing with confined particles: discrete levels and discrete energy steps to change from one to the other. So this allows to write the Hamiltonian for this kind of systems like counting total energy: if level k is occupied, then add $E_k$ to the system energy. This is what the atomic Hamiltonian represents: if you have the system in a state $\lvert \psi \rangle = c_g \lvert g \rangle + c_e \lvert e \rangle$ you will get $\langle \psi \lvert H^A\lvert \psi \rangle = (c_g^* \langle g \lvert + c_e^* \langle e \lvert) (\hbar \omega_g \lvert g \rangle \langle g \lvert+ \hbar \omega_e \lvert e \rangle \langle e \lvert)(c_g \lvert g \rangle + c_e \lvert e \rangle)$ which you will see to get the mean values for the energy of the system in this state with $p_e=\sqrt{c_e c_e^*}$ and $p_g=\sqrt{c_g c_g^*}$ are the probabilities for each state, or the projections of $\lvert \psi \rangle$ into the eigenstates $\lvert e \rangle$ and $\lvert g \rangle$.

The second one is similar, but here there can be many photons in one state. So the total energy inside the cavity is a counting of how many photons are inside, and the creation and annihilation operators can be seen here for the harmonic oscillator (probably relevant here) and other examples.

Not the answer you're looking for? Browse other questions tagged mathematical-physics quantum-optics or ask your own question.

3
What are "parity considerations" in deciding the form of the Hamiltonian?
1
Deriving the optical Bloch equations from the von Neumann equations
0
Time Evolution of Coherent State (Gerry and Knight)
10
Can we always express the EM-Field Hamiltonian as (possibly time dependent) pair of annihilation and creation operators?
3
Cavity optomechanics Hamiltonian
1
Amplitude of single-mode field in a cavity