What is the physical reason that the undamped driven oscillator has mean power zero?

The instantaneous power absorbed by an undamped driven oscillator is given by:$$\mathbf{P} =-\omega\dfrac{F_o/m}{{\omega_0}^2 -{\omega}^2} F_0 \sin{\omega t}\cos{\omega t}$$. But my book says the mean power of an undamped driven oscillator is zero. What is the physical reason behind this? Can I infer mathematically the average power to be zero from instantaneous power?

Also can anyone help me visualise what the following para is saying?

The power input, being proportional to $\sin{2\omega t}$ , is positive half the time & negative for the other half, averageing out to be zero over any integral number of half-periods of oscillation. That is, energy is fed into the system during one quarter-cycle & is taken out again during the next-quarter cycle.

Now the period of the function $\sin (2\omega t)$ is half that of $\sin (\omega t)$. When your book talks about the the period of oscillation, it is talking about the latter, which equals $2\pi/\omega .$ 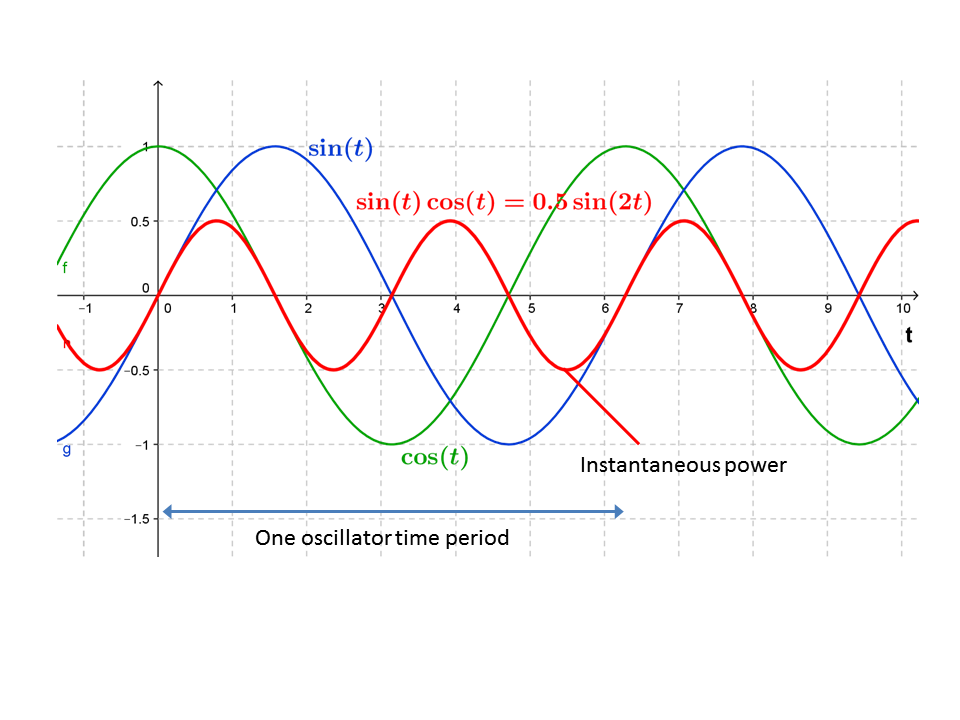 In terms of physics, what is going on is that the force is being applied $\pi/2$ out of phase to the velocity of the oscillation. The total energy of the oscillator (shared between kinetic and potential energy) is not changing; and because there is no damping, energy is not being lost either. Therefore on average no power is expended. Instantaneously the situation is more complex. Work must be done to stretch the spring for quarter of a cycle (assuming it is a spring); but then in an undamped system, all that potential energy is recovered as the spring comes back towards the equilibrium position and turned back into kinetic energy. And then repeated on the other side of the equilibrium position to complete one full oscillator-period.

0
Why doesn't the stored energy of a forced oscillator change if averaged over a long time?

6
Is the usually taught solution to forced harmonic motion just a special solution?
0
Calculating the RMS angle of a driven oscillator
3
Why is the resonance frequency of an undamped oscillator equal to the undamped resonance?
6
Non-integer powers for the quantum harmonic oscillator ladder operators and spectrum uniqueness
0
Quantum Harmonic Oscillator and an instantaneous force that imparts a momentum