What is the exact physics behind sonic levitation

Me and a group of friends decided to choose sonic levitation as our research topic. However, after looking up the theoretical background, we hit a roadblock:

(Here is an image of a standing sound wave, we'll just need to imagine this on its side)

It is easy to grasp that when there is an upward force lifting the ball when there is a high pressure below the object, lifting it and counteracting gravity

This is where most websites leave their answers, however, standing sound waves change over time. This means that a fraction of a second later this happens for an equal amount of time!

And in between the changing there is even a short moment (theoretically) in which there are no pressure differences and only gravity pulls the object down. Not to mention that such flips of pressure happen over 23000+ times a second for a regular acoustic levitator.

If this pressure force is constantly changing in an equal and opposite direction how can it lift objects mid-air? The machines work in real life, so how exactly does this work?

I'd like to start from mathematical description of the following process. At the end of my post I will give you a qualitative explanation.

Mathermatical description of the motion in frequently oscillating field

Actually, the problem you state can be generalized to the following one:

Suppose you have a particle that moves in some force field that oscillates frequently in time. One can write the force, acting on the particle as follows: $$\mathbf{F}(\mathbf{r},t)=\mathbf{f(\mathbf{r})}\cdot \cos(\omega t)$$ Note, that the amplitude of oscillations depends on the position - in is a key feature. The question is to find out what the motion of that particle looks like, if the frequency of oscillations is very large.

The theory of motion in such a field is a well-known (and solved) problem. The detailed solution can be found in the following book: Landau, Lifshitz: Course of Theoretical Physics, Volume I "Mechanics" in paragraph 30. I won't retell you the calculations from the book in detail, but I will say several words about the result obtained there. Using some tricky math authors find "averaged" equations of motion for a particle in this case. This equations do not contain rapidly oscillating terms.

In your case this force field is associated with pressure. Your problem can be treated in one dimension: there is pressure $p(x,t)=p_0\sin(kx)\cos(\omega t)$ that results in force $F(x,t)=-V\frac{\partial p(x,t)}{\partial x}=-Vkp_0\cos(kx)\cos(\omega t)$ (this is Archimedes law), where $V$ is the volume of a droplet. The effective potential, induced by the pressure field is: $$U_{eff}=\frac{V^2k^2p_0^2\cos ^2(kx)}{4m\omega}$$ So, the total potential energy (including gravitational one) is: $$U=-mgx+\frac{V^2k^2p_0^2\cos ^2(kx)}{4m\omega}$$ If the pressure amplitude is large enough, there are points of local minimums - equilibrium positions for droplets! (on the picture you can see illustration of this fact; it is potential enery against distance in some units; the average negative slope is associated with gravity and minimums are associated with pressure) 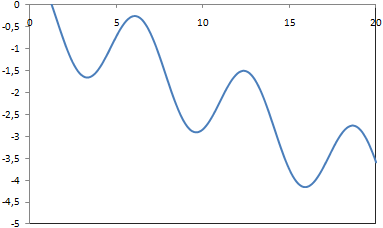 But yet: how can one understand this result qualitaively? The explanation is as follows:

Suppose your particle moves around in vibrating pressure field in some way. It is quite clear that one can express the position of the particle (as a function of time) as follows: $x(t)=X(t)+\delta x(t)$, where $X(t)$ is smooth function and $\delta x(t)=-A\cos(\omega t)$ is small deviation that happens in antiphase to the field's oscillations (as always for excited oscillations with no friction). Imagine that your particle is now in the region of non-constant (in space) oscillating force and amplitude of this oscillations is higher in front of the particle and lower behind it. As was mentioned, $\delta x(t)$ happens in antiphase to external field, thus, when $\delta x>0$ the particle is pushed back and when $\delta x<0$ the particle is pushed in front. However, external field is higher in the region where $\delta x>0$ and lower where $\delta x<0$, so the total impulse over the period will be directed in the region of "weak" oscillations.

That's it. If you want, I can explain something in more detail.

PS: Sorry for my language, if it was a problem.

The answer seems to be that the levitating object is vibrating and pressure gradient is a function of time, but also of the position of the object.

Suppose the object's has initially zero velocity, is located at a node, while the pressure gradient is maximal and pushing it upwards. The object accelerates upwards and the pressure gradient flips it's sign. However, suppose during that time, our object has already traveled near anti-node and the gradient becomes near zero. So the only force acting then will be the gravitational one, and the object decelerates and starts falling. As the object falls, the gradient flips again, and as it will travel near the node again, the effect due to gradient becomes strong again.

Not the answer you're looking for? Browse other questions tagged acoustics levitation or ask your own question.