A related question When does an aerobraking space craft create a sonic boom? has spawned a couple of answers, but so far no compelling answers.

It is a common belief that in space there is no sound, How far do you have to be from Earth to be “in space”? does not have a definitive answer. But the Kármán line, at an altitude of 100 km (62 mi) above sea level is often given, it seems unlike that this is the exact altitude that air becomes too thin to carry a sound wave.

The top voted answer at What is the minimum pressure of a medium for which a sound wave can exist? seems to imply there is someplace where sound would fall below human thresholds. But does not relate it to an elevation.

First, I am going to provide a little background on equivalent pressures at different altitudes from Earth's surface.

The below image from https://en.wikipedia.org/wiki/File:Comparison_US_standard_atmosphere_1962.svg shows the broad range of temperatures/pressures of Earth's atmosphere. 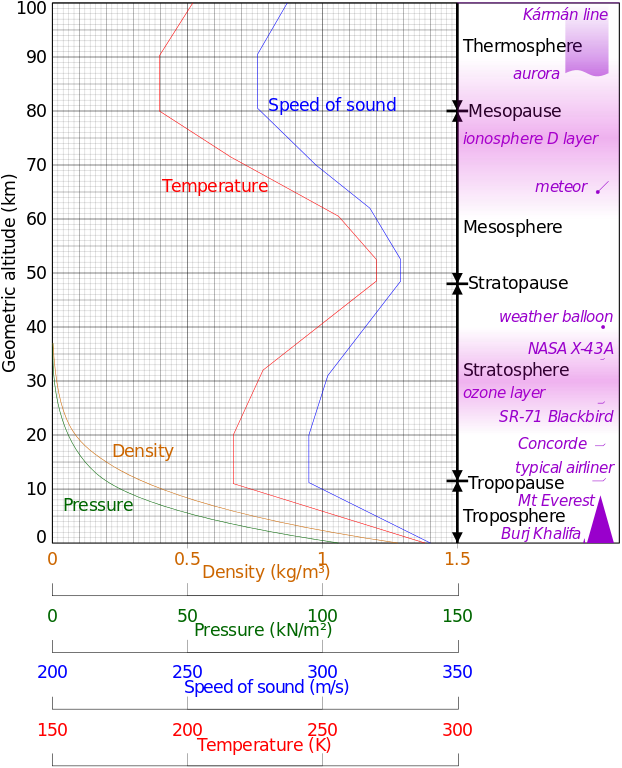 Ionosphere
The region where the atmosphere transitions from mostly neutral to mostly ionized gas (called a plasma) is called the ionosphere. The altitudes defining this region vary (due to solar variability), but are generally defined as ranging from ~60-1000 km. The free electron number density in the ionosphere varies greatly from ~$10^{3} - 10^{6}$ # $cm^{-3}$ (or number of particles per cubic centimeter). The temperature varies from few 100 K to ~1500 K. Thus, if we treated it like an ideal gas the thermal pressure of the charged particles would range from a few $10^{-12}$ Pa to few $10^{-8}$ Pa.

Outer Magnetosphere
The "best" vacuum that we can easily access is the Earth's outer magnetosphere, which has a density ranging from ~0.01-1.0 particles per cubic centimeter. The temperatures in the outer magnetosphere can vary greatly from ~$10^{5}$ K to greater than $10^{9}$ K (i.e., if one converts radiation belt particle energies, e.g., 100s of keV, to an equivalent temperature). Thus, the range of equivalent ideal gas thermal pressures would be few $10^{-14}$ Pa to a few $10^{-8}$ Pa.

Short Answer
For all practical purposes, there are no regions of space completely devoid of some kind of sound.

Long/Detailed Answer
Interestingly, one can have the traditional sound wave (i.e., a longitudinal oscillation mediated by gas particle collisions) propagate into the upper atmosphere and even into the ionosphere. The point where such a sound wave would experience strong damping is where the collisional mean free path becomes too large to support the oscillations, i.e., this would occur when the average time between collisions becomes comparable to the wave frequency. Thus, the oscillations would have no restoring force and would damp out (for an electromagnetic analogy, see evanescent waves).

It is a common belief that in space there is no sound...?

There are multiple sound waves in space, including ion acoustic waves and magnetosonic waves. Ion acoustic waves have been seen all the way out at Saturn, where the solar wind density and temperature can be as low as ~0.1 # $cm^{-3}$ and less than ~$10^{4}$ K, or thermal pressures below $10^{-14}$ Pa (note that the ram or dynamic pressure is generally ~2-4 orders of magnitude higher owing to the high speed of the solar wind). These modes have been observed as far out as Neptune, throughout the solar wind, and as in close as ~0.3 AU.

Let me ask the question in a slightly different manner.

At what altitude would I no longer be able to hear a 100 dB source (ignoring suffication)?

The model only went to 100 km but even so, our source would become difficult to hear if we moved a little more than ~100 m from it. Given that the density decreases exponentially with an e-folding distance of only ~8.5 km (pressure does so similarly as well), if we extrapolate our estimates for $L_{i,src}\left( h \right)$ then the value drops to ~10 dB by ~177 km.

Not the answer you're looking for? Browse other questions tagged thermodynamics acoustics atmospheric-science plasma-physics or ask your own question.

101
What is the speed of sound in space?
96
How can a black hole produce sound?
44
What is the minimum pressure of a medium for which a sound wave can exist?
10
Is it possible to noise cancel a sonic boom?
9
What is the loudest possible sound?
8
How much power and energy is (actually) in a 230 dB "click" from a whale?
6
Doppler shift and change in intensity of a sound wave
5
Why is sound attenuation greater in dry air than humid air?
7
What is the max frequency of sound in a given medium?
2
Atmospheric pressure And heat convection
See more linked questions

6
Do asteroids create sonic boom while entering the atmosphere?
14
Is it possible to create an audible sound source in mid air by intersecting ultrasonic sound beams?
2
Is work done by sound wave on air particles?
3
Using sinusoids to represent sound waves
4
More detail on why pressure increases at the bottom of a column of gas
0
Why does the speed of sound relate to temperature in increasing altitude?
3
Why is it a sonic "boom" and not a sonic "boooooooooooooooo...m"?