What are ADU (analog-to-digital units)?

Can someone explain simply what are ADU's? I was reading this post here: http://www.qsimaging.com/blog/understanding-gain-on-a-ccd-camera/

However, I still don't quite understand this statement:

"Gain on a CCD camera represents the conversion factor from electrons (e-) into digital counts, or Analog-Digital Units (ADUs). Gain is expressed as the number of electrons that get converted into a digital number, or electrons per ADU (e-/ADU)."

It seems ADU is a "digital number" but what is that? The units of ADU is "counts", but what are those counts? They are not electrons, it seems, then what are they? Time? I'm sorry if this is silly, but I just can't comprehend what ADU's physically are. It really stumped me from understanding the rest of the article.

There are several concepts and issues going on here that are getting mixed together.

An ADC (Analog To Digital Convertor) takes signal values in a certain range and converts then to a digital number. Let's run some numbers:

A N bit ADC will be able to represent 2^N states. So a 4 bit ADC can represent 16 distinct states, 8 bits => 256 States and a 12 bit convertor will give you 4096 states. By itself that tells you nothing, you need to know that going from a digital representation of say 533 -> 534 means that the input signal changed by certain amount. To keep the example simple I'm going to say that I have an input range from 0 Volts to 4.095 Volts on a 12 bit convertor, that means that when I have a digital number of 0 then I must have had 0 on the input. Let's also assume everything is ideal for now. With my sneaky choice of input range you can see that for every change in the ADC output digital number by one count then the input must have changed by 1 mV.

Each of these binary steps are called an ADU (Analog Digital Unit) or Binary Number or Digital Count etc. etc. to keep it separate from the number of bits that the ADC has. This is to ensure that the relationship is in a linear range. If you start using "bits" then it is in a logarithmic range (2^N). The main reason these other names/units are used is that LSB's used to be used. What is a LSB? - it stands for Least Significant Bit, i.e. the zeroth bit in the digital number, which changes precisely in step with the ADU but using LSB (and the implied 'bit") is confusing. Imagine saying, " the ADC changed by 30 LSB's therefore the light flux must have changed by 3000 photons ". 30 LSB's really doesn't make sense, it is a mixing of terminology, so people are moving away from that. But that has meant that many different terms being used instead confusing again...

So you have a conversion from voltage into a digital number.

But you are collecting photons, where does voltage come from?

Next the Voltage conversion;

All image sensors at some point in the signal chain will convert the collected signal charge into voltage to interact with the outside world. This is always done using a capacitance and a buffer amplifier. This capacitor and the gain of the amplifier set the conversion from electrons into voltage as A/C_sense which is derived from the Q= CV equation. With C_sense = the sense node capacitance and A = gain of the buffer amplifier.

Next the photon conversion

When a Photon comes rattling into a pixel it has to make it into the photosensitive substrate, this interface is controlled by the fresnel equations and dictates how much light goes into the substrate based upon the indices of refraction and the various materials and AR coatings present (AR = Anti-reflection). This is known as the external QE (Quantum efficiency). Once in the substrate the photons are absorbed through it's depth and generate electron/hole pairs through the photo electron effect. Electric fields sweep the carriers into storage structures. The absorption depth and the depth of influence of the electric fields (these two depths may not be co-incident) are what determines the Internal QE. NOt every converted photon's carriers get collected.

These collected carriers (either electrons or holes) are brought to the sense node and converted into voltages. Where this conversion happens (carrier to voltage) is determined by the type of sensor, a CCD or CMOS image sensor.

Very simply, some fraction (usually 50-80%) of photons impacting each pixel on the CCD will result in an electron being excited out of the photoactive silicon layer and adding to the charge on a capacitor associated with that pixel. As the number of photons increases, so does the charge on each capacitor, in an approximately linear way.

When the CCD is "readout" the electrons from each pixel capacitor are transferred out of the main imaging array to a readout array where the voltage caused by the charge accumulation is sampled and converted into a digital number (the number of ADUs), using an electronic device called an analogue to digital converter (ADC).

There is a conversion factor, called the gain, which can be used to relate how many ADUs (analogue to digital units) are recorded for a given number of electrons on the capacitor, and hence the number of photons that were actually detected in each pixel. The usual definition is that the gain is the number of photo-excited electrons that produce a single ADU.

The value of the gain is determined by the electronics of the analogue to digital converter. Typically in astronomy it will be somewhere between 0.5 and 5.

A pictorial summary of the process from http://www.qsimaging.com/blog/understanding-gain-on-a-ccd-camera/ The final digital value is in the range 0 to 64K, so the ADC is working with 16 bits. 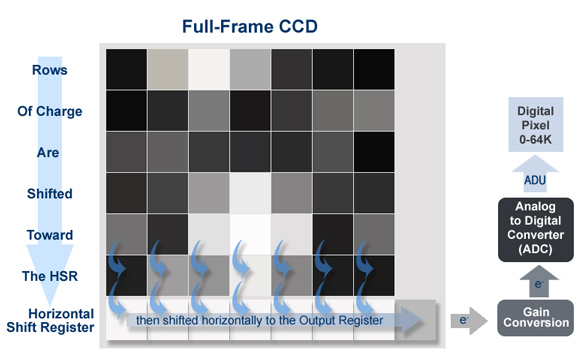 Many p-n layers are used which are opposite charged. and avalanche of electrons is created between them.

Not the answer you're looking for? Browse other questions tagged astronomy telescopes camera or ask your own question.

4
What are the pros and cons of a german equatorial mount vs. a fork mount?
11
What is exactly a Dobsonian, and what are the differences when compared with Schmidt-Cassegrain or Newtonian?
6
What telescope would I need to observe Mars's polar caps?
7
What are the minimum telescope requirements to view a nice spiral galaxy?
8
Why are telescopes on top of Mauna Kea instead of Mauna Loa?
0
What can be seen with a 114mm Aperture 675x Zoom Telescope?
12
What prevents digital interferometry in an optical telescope array?
28
Are Hubble Telescope Images in true color?
0
Are there Wolter telescope lenses for consumer cameras?