Why can't impulse be instantaneous?

But when it comes to impulse, it always acts for a certain time, however small (infinitesimal) it might be. If rate of change of momentum is instantaneous and force is instantaneous, why can't the impulse be instantaneous? What is the cause?

Can anyone also tell how can there be change of momentum at an instant?

Consider a superball falling toward a hard tile floor. The ball will bounce rather nicely. How to model this collision?

One way to model this is to ignore all those details of the bounce. Since the duration is so very short, the bounce can be modeled as an instantaneous change in momentum determined by the ball's coefficient of restitution. This is a simplification that intentionally ignore the details of the bounce. While the maximum force is very high compared to the weight of the ball, the force is never infinite, and the change in momentum is not instantaneous.

The same applies to any application where one models forces as impulsive. It's just a model, a simplification that lets one ignore the details. The force is never truly infinite, so the change in momentum is never truly instantaneous.

Maybe this graph helps to illustrate the point. Consider a constant force that is applied for a finite interval $\Delta t$. The slope in the $p$ graph at any given time is $\frac{dp}{dt}$. Now, in order to have a step in $p$ (an instantaneous impulse), it is necessary to get an infinite slope, hence an infinite force is required which is physically not possible. 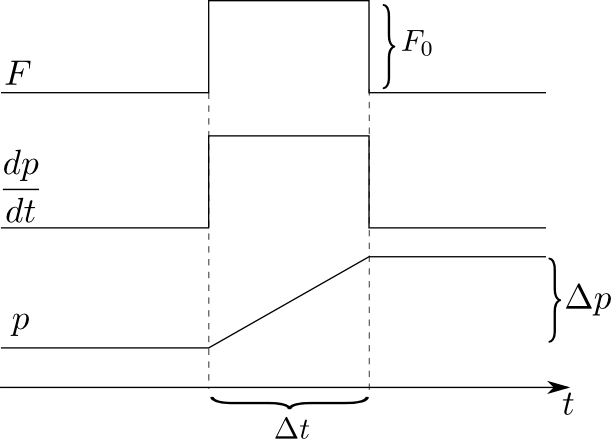 Having said that, there are some situations where a having an infinite force for an instant is a good model of a real situation. For example, hitting a ball with a hammer. In this case, the force is not really infinite nor instantaneous but in good approximation it can be seen like that. In such cases the force is mathematically modeled by a Dirac delta which is just that; an infinite force applied instantly. This case would be like taking the limit of the above picture where $\Delta t \rightarrow 0$ and $F_0 \rightarrow \infty$ while keeping the area $F_0 \Delta t$ constant.

but I doubt how can there be change of momentum at an instant?

It isn't clear to me what you mean here. Do you mean you doubt that momentum can be discontinuous?

If so, then your doubt is justified. Classically, momentum cannot actually be discontinuous at some time $t_0$ since that would imply an actually infinite force acting at $t_0$.

If you're trying to say something else, please clarify your question.

But when it comes to impulse, it always acts for a certain time,

When we integrate the force (with respect to time) over that certain time, the result is the impulse of the force acting for that time - impulse has time 'built in'.

So, for example, if a force acts over some time $\Delta t$ and we integrate the force over that time, the result is the time average of that force multiplied by $\Delta t$ and this is called the impulse produced by the force:

Can anyone also tell how can there be change of momentum at an instant?

If you mean a finite (rather than infinitesimal) change at an instant, this requires an actually infinite force which isn't physical. However, mathematically, we can abstractly describe such a force with a Dirac delta distribution which can be useful. For example, take a look at Green's functions.

All objects interact via a force that has a finite range. Ultimately this would be one of the four forces electromagnetic, strong, weak and gravity. Since these forces change smoothly with distance the rate of change of momentum can never become infinite.

0
Can there be instantaneous change in force (friction)?

1
Inelastic collision and impulse
4
Can it require different amounts of energy to generate the same impulse?
0
Applying conservation of liner momentum on a firework's explosion
0
How force is equal to the product of mass and instantaneous acceleration?
1
Instantaneous velocity applications
1
Meaning of normal acceleration?
0
How to calculate impulse at a particular time instant?