I've stumbled upon a strange class of Android applications lately. (And I'm sure such applications are available for other platforms too.)

These apps claim the ability of detecting radiation. The mechanism would be gamma rays hitting the light detector and causing ionization much the same way as visible light photons do.

I own a small collection of radioactive minerals. I also built an ionization chamber detector that can hardly detect a small uranium glass bead, can show the presence of 2% thorium in a tungsten welding rod with confidence, goes right off near any of my minerals, and an americium source utterly throws it off-balance.

I understand the suggested mechanism of action of these apps, and without doing the math, it seems not-so-impossible.

Of course I've tested one of them with a recent smart phone with a sensitive and high resolution camera. Measurements all came out negative: same amount of radiation measured next to me on the table than among pieces of gummite, autunite, pitchblende, tyuyamunite, liebigite, thorite, younameit ;)

I've got upset by the fact that maybe I've been fooled to pay the ~$10 for the premium version of one of these magical applications, and decided to do a detailed analysis on images from a webcam built into my notebook covered with black electric tape.

First I've verified that the cover works by looking at the images from the camera with a desktop application. The images were all pitch black.

I than have written a python script that takes images, highpass-filters every individual pixel and all three color channel (to cancel "hot pixels" and similar artifacts and concentrate on changes), and calculates the average (for sanity check) and standard distribution of the tremendous amount of 1 byte samples.

I base my trust in this amount on the very much less amount of data taken by the application. It might take a few dozen or maybe a hundred pictures, but nothing more. The app simply doesn't run that long.

If the light detector inside the camera would react even weakly with the gamma (and maybe beta) radiation from the minerals, pixels should light up here and there, pushing the distribution wider.

The average was something around $10^{-3}$ (and getting closer to zero as one might expect), and the standard deviation was about $3*10^{-3}$ both in the presence and absence of radioactive minerals.

This is a part answer - there has been research and a successful app made to detect gamma radiation using a smartphone camera by the Australian Nuclear Science and Technology Organisation, as reported on their webpage Smartphone radiation detector app tests positive.

Specifically, the basis of their work is based on findings that

These apps utilise the ionising radiation sensitivity of on board silicon-based complementary metal-oxide-semiconductor (CMOS) cameras to monitor radiation levels in the surroundings.

By covering up the image sensor (to prevent visible light interference) and recording how many counts that were received in a controlled environment, the results were compelling, with a very strong linear response (from the website): 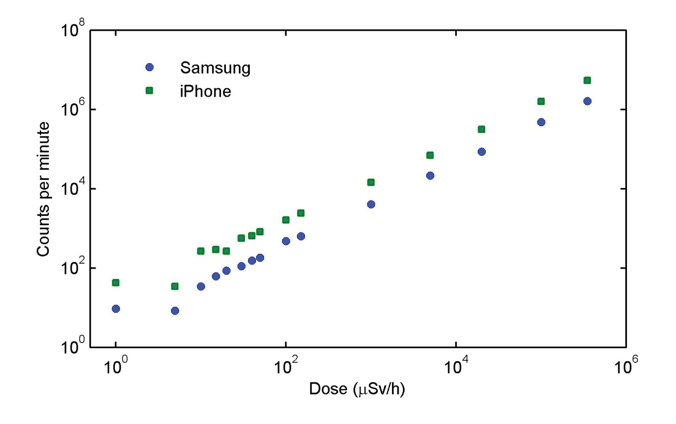 If we believe this measurement shown by Omen, smartphone cameras are basically useless below Dose rates of 10uSv/h. The max. exposure limit for a human who is not a radiation worker is 1mSv/year, which translates into roughly 0.11uSv/h. In other words, the camera chip in a phone would have to be 100 times more sensitive to pick up relevant amounts of radiation. And once we are in the range where a phone camera becomes sensitive, there better be a professional with a real radiation counter around, because something went horribly wrong!

As the producer of one of these apps (GammaPix, available for Android and iOS, if you'll forgive the plug), allow me to weigh in here. Yes, smartphone, and other CMOS and CCD cameras, can detect radiation. While cameras are less sensitive then Geiger-Muller counters, specialized solid state detectors, and scintillators, they are sensitive enough for quite a few applications.

We've found that their sensitivity varies widely depending on several factors. Some variation has to do with the details of the chip construction. CCD's are about 10 times less sensitive than CMOS chips, for example, but most phones have the latter. Some of it has to do with the chip firmware and image processing stack. Different model chips have different physical sizes. Some devices feature "blemish removal" algorithms that suppress bright single-pixel events from gamma rays. Some devices (e.g. many from Motorola) have their algorithms set to turn the gain way up in low-light situations. This setting contributes a sometimes large noise floor against which the radiation signal needs to be detected. (That's the floor that is seen in Omen's graph.) A large number of these instrumental effects need to be accounted for to get this technique to work. The device's specific behavior sets a lower limit on how low a dose can be measured in a given amount of time. There are other devices that are quite clean, and in any case, we've developed a number of techniques to get around these limitations and increase the sensitivity to gamma rays.

We've verified the functionality and sensitivity of GammaPix applications in a number of government labs, including Oak Ridge National Lab. GammaPix went through the Department of Homeland Security's rigorous evaluation procedure under the "SAFETY Act," and was granted DTE Designation, which should provide a significant degree of confidence that the technique is both functional and sufficiently sensitive to satisfy real-world detection problems. (Enter "Image Insight" into the keyword search field at the DHS website.) As the algorithms have improved over the last several years, we've increased the sensitivity of GammaPix on good devices by several orders of magnitude above what is shown in the plot above. For devices with decent sensitivity, we can generally detect a level of 20μSv/hr in under a minute. For such devices, the background level can be detected with a measurement of one-half to a few hours. Security checkpoint X-ray machines, give a strong, if brief signal. I've also gotten positive results with my iPhone 5 at the dentist, with the phone under the lead blanket, but near my head.

Remember, exposure to low dose rates over a year, even if it reaches the 1 mSv/yr limit, will not have the same biological effect as a high dose for a short time that has the same total dose. The 20μSv/hr level I quoted above is the value used by First Responders in setting up a security cordon around an incident. Contrary to what CuriousOne wrote in his answer, if the dose rate goes up to this sort of level, it may be a while before there's a professional around with a detector, and it could well be that a member of the public using one of these apps would be the one to let the professionals know that there was a problem!

Not the answer you're looking for? Browse other questions tagged radioactivity electronics image-processing or ask your own question.

0
Do all radioactive isotopes and compounds exhibit photoluminesce?

0
Is it possible to make an RFID-like device which responds to a metal detector?
1
Why can't I use a gyroscope/accelerometer only as a compass?
12
Fundamentally, why do some nuclei emit ionizing radiation?
2
Using photographic film to measure radioactivity
8
What are some household sources of radiation detectable with a geiger counter?