Why can't we feel the Earth turning?

The Earth turns with a very high velocity, around its own axis and around the Sun. So why can't we feel that it's turning, but we can still feel earthquake.

Because the rotation of the earth is very smooth and doesn't change, the centripetal acceleration we feel is very nearly constant. This means that the (small) centrifugal force from the rotation gets added to gravity to make up the "background force" we don't notice.

Earthquakes are not at all smooth and the accelerations involved are large and change direction a lot. This makes it easy to feel them.

Dan's answer is essentially good, but miss one effect : the Coriolis effect. You can imagine a planet spinning much more rapidly than the earth, but at a constant angular speed. On that quickly rotating planet, the explanation of Dan would still stand, but as soon as on moves, we would feel a lateral Coriolis force.

This small effect can accumulate over long distance and can have visible effects, notably at meteorological scales. In some sense, we feel the Earth rotation when we feel the dominant wind direction in our region. The parameter characterizing the intensity of the Coriolis effect for a phenomenon is the Rossby number, which is big if the Coriolis effect is negligible. If the phenomenon you analyse has a typical speed $v$, occur over a distance $L$, the Rosby number is essentialy proportional to the ration of the rotation period (24 h in our case) over the time $v/L$ it takes to go over the typical distance.

For meteorological depressions, the wind take several days to go over the thousands of kilometres they span, and the Coriolis effect has an important effect. To really feel the effect in everyday's life, one would need to be on a planet with a day of a few seconds, like the Little Prince's lamplighter's planet ! Of course, if you don't live on a rapidly rotating asteroid, you can see the effect on a carousel.

I know it's very late in the game for this question, but this is partly a biology question. We don't feel the rotation of the earth because our brains are biased, they evolved that way. It's not useful to experience/be aware of this rotation day by day, in the same way it isn't useful to be aware of gravity. This is also why this optical illusion works: 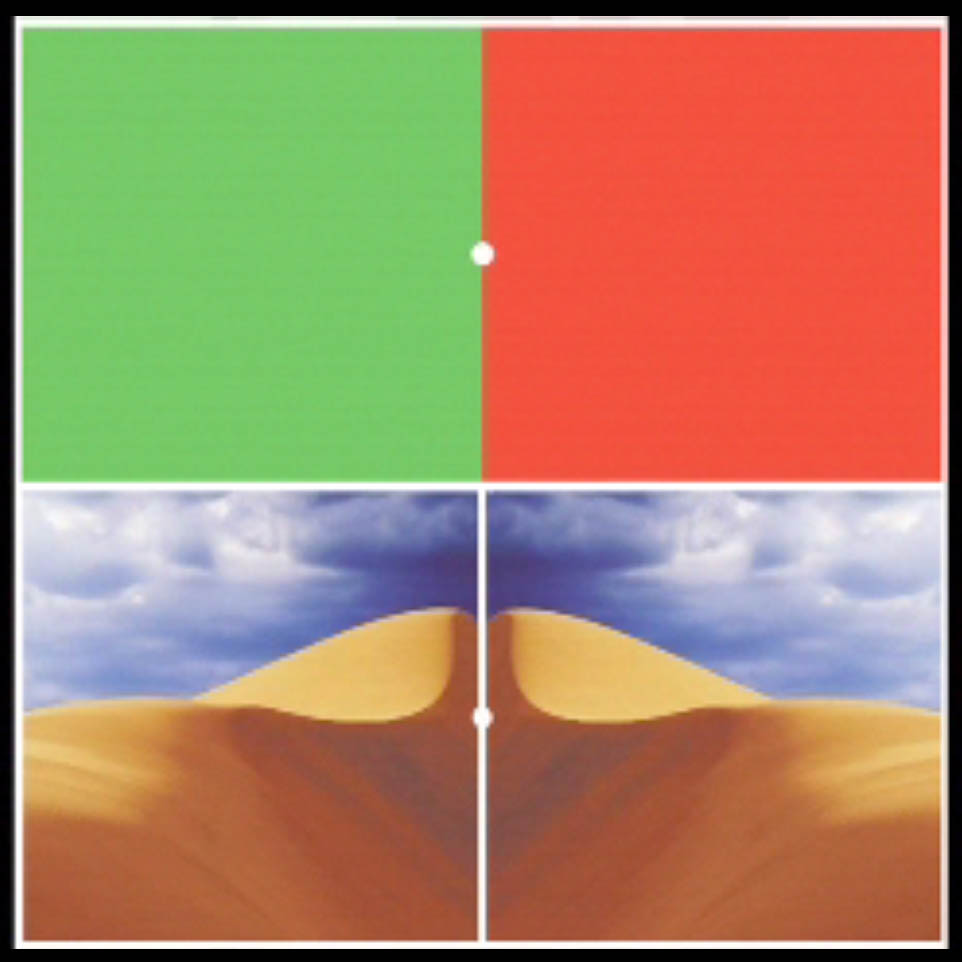 Our brains constantly adjust to what is "normal". In the above illusion, your brain "learns" that the right side of its field of vision is under red illumination, while the left side is under green illumination. Looking at the desert scenes below then reflects this new bias your brain have adopted.

Dan also touched on this in his answer, talking about the "background force" we don't notice. It is vital that the rotation is fairly constant, because our brains need time to adjust. But if somehow the earth suddenly started rotating at a higher but equally constant angular velocity, we all might be struggling a bit for a while.

In the case of adjusting the colour bias for your eyes, the adjustment is made within a few tens of seconds, but other changes are harder to adjust to. An example are upside-down goggles. Doing some googling brought me to the wikipedia page for perceptual adaptation. Although this focuses on the adjustment of the visual sense, this adaptation is a general function of the brain. In the case where the background force changes, I suspect the adaptation would take about the same amount of time as in the case of the upside-down goggles, maybe a little less - though this is only a guess.

Can we keep this simple ?

The answer is that the acceleration associated with the rotation is very small and it is accounted for in the definition of the vertical.

The acceleration makes an angle of $\theta$ with the direction to the Earth's centre. The total force is the vectorial sum of gravity and centripetal force and this merely redefines the vertical direction by a tiny amount. If your floor was made plumb level this tiny deviation is built into your house and city.

we don’t feel the Earth spin because we, the atmosphere, skyscrapers, and everything else are spinning along with the Earth at the same constant speed.

Not the answer you're looking for? Browse other questions tagged newtonian-gravity reference-frames earth centrifugal-force coriolis-effect or ask your own question.

12
Why $(apparently)$ is the rotation of Earth not congruent/similar to Uniform Circular Motion?
4
How do I experience Earth's movement?
3
Why can't we feel the Earth (or being in any non-inertial frame) rotating?
6
How would gravity change on a planet rotating around itself very fast?
2
Does being suspended in air allow you to not be affected by Earth's rotation?
0
How do we not feel the speed of rotation of Earth?
1
Do we feel the full force of the earths gravity even though the earth is spinning