Why wouldn't the part of the Earth facing the Sun a half year before be facing away from it now at noon?

Now take a look at the following picture: 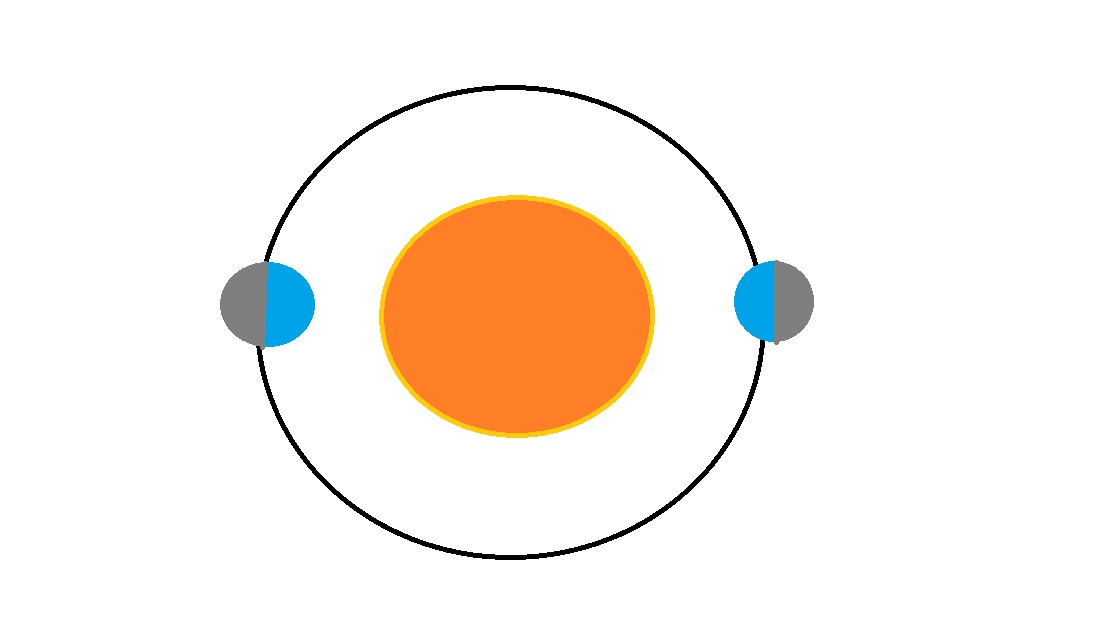 Assuming that the Earth is in the position on the left is, say, on 1st of Jan. 2017 and in the position on the right, half year after. The Earth will be roughly on the opposite side of the Sun given that half a year passed, is that correct? If at noon, half a year earlier, that part of the Earth was facing the Sun, then why wouldn't the opposite part of the Earth be facing the Sun now, after 182 complete rotations and the Earth being on the opposite side of the Sun? We expect the noon-time to occur on the dark side instead of the lighted side.

Shouldn't this cause the AM/PM to switch, the rotations made are consistent with 182 passing days. Assuming it's noon at both dates, why does the Earth face the Sun at the same time on both sides of the Sun?

Depending on the specifics (such as what it means to "spin around"), this is incorrect. To spin around exactly once with respect to distant stars (aka Sidereal day) requires 236 seconds less than 24 hours. Over half a year, this nearly 4 minute difference every day adds up to about 12 hours, the time it takes to rotate half way around and face the sun again.

24 hours is the length of the average solar day (Synodic Day), the time it takes the earth to rotate so that (on average) it is facing the sun at the same angle. Because the time period derives from a sun-referenced rotation, not a star-referenced rotation, the same spot on the earth faces the sun at approximately the same time every solar day. (Ignoring additional changes from axial tilt and orbital eccentricity)

Our clocks are set so that 24 hours is the time for the Sun to appear in the same part of the sky. What this means in terms of the Earth's orbit and rotation is that the Earth does slightly more than a complete rotation in 24 hours.

Let's say that your picture is drawn from the perspective above Earth's north pole. Earth rotates and orbits counterclockwise. Draw a line on the right-hand side Earth from the point closest to the sun (where it is noon) towards the sun. After 24 hours, the Earth will have moved about 1/365 of the way around it's orbit, and the line will have rotated just a bit more than 360 degrees so that it is pointing at the sun again.

The time where the line from Earth is parallel to the original line before rotation is called a sidereal day, and is 23 hours and 56 minutes long.

How would you pin point an exact full rotation? It's much easier to say "when the Sun is at the same spot in the sky" than to say "after one full rotation."

By referring to the Sun, a "full rotation" would be exactly 360 degrees only if Earth wasn't moving around it.

But it does. After Earth has rotated once, it has also moved a bit. Thus it has to rotate a tiny bit extra to have the Sun in the same spot in the sky again. A "full rotation" is then a tiny bit more than 360 degrees.

You can never reach a situation, where you would say "now it's noon" without having the Sun at the same spot in the sky - not after half a year either.

Not the answer you're looking for? Browse other questions tagged astrophysics everyday-life earth rotation sun or ask your own question.

6
Can human push Earth away from the Sun?
2
Do these cars rotate on themselves?
1
How long will it take before the orbit of the earth is 365 days exactly?
0
Static model of the Earth motion
0
Why is the moon not full?
8
How do neutrinos pass through the sun so quickly?
1
What happens to the water on the surface of the Earth if the Earth is not rotating about its axis in the Earth-Moon system?
0
Does the length of days change substantially during the year, from more than 24 hours to less?
3
Should the centripetal force of Earth's orbit around the Sun affect a pendulum on Earth?