I've already look the derivation of the Lagrange points, but when deriving it, people look at the system as if were stopped in a moment in time and find the saddle points when $\vec{F}_{\Omega}=\vec{0}$. My problem is the following:

Problem: Given three objects with masses, $m_1,m_2,m_3$, such that $m_3<<m_1,m_2$. Find the initial conditions of the third object, such that it's initial position is one of the Lagrange points and that it remains orbiting always in the Lagrange point for a long period of time.

I managed to find a initial velocity by putting numbers, in following picture(but that's not the idea):

Initial Conditions for this picture: 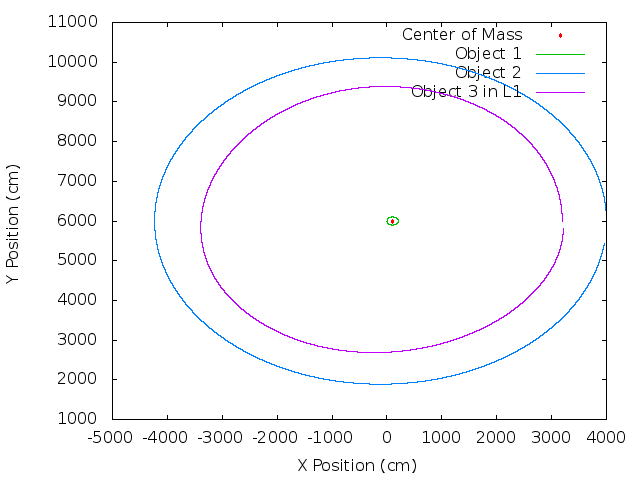 The Lagrange points are fixed in the rotating coordinate frame where the two masses are fixed. You should be able to start with $m_3$ having zero velocity in that frame. Transform that zero velocity into inertial space (if that is where you are doing the simulation) and there you should be.

Not the answer you're looking for? Browse other questions tagged homework-and-exercises newtonian-mechanics simulations celestial-mechanics or ask your own question.

2
Speed of three objects falling with different masses
2
Coupled Spring System (3 mass 3 springs)
0
How to find a constraint equation to relate the two tension forces in this arrangement?
6
Will “A” experience max static friction if “A” is connected to “B” which is on the verge of slipping?
0
Tension and Angular Momentum Equilibrium (Exercise)
2
In general, conservation laws do not hold whenever the center of mass of the system is moving?