I have this exercise that i'm trying to understand: 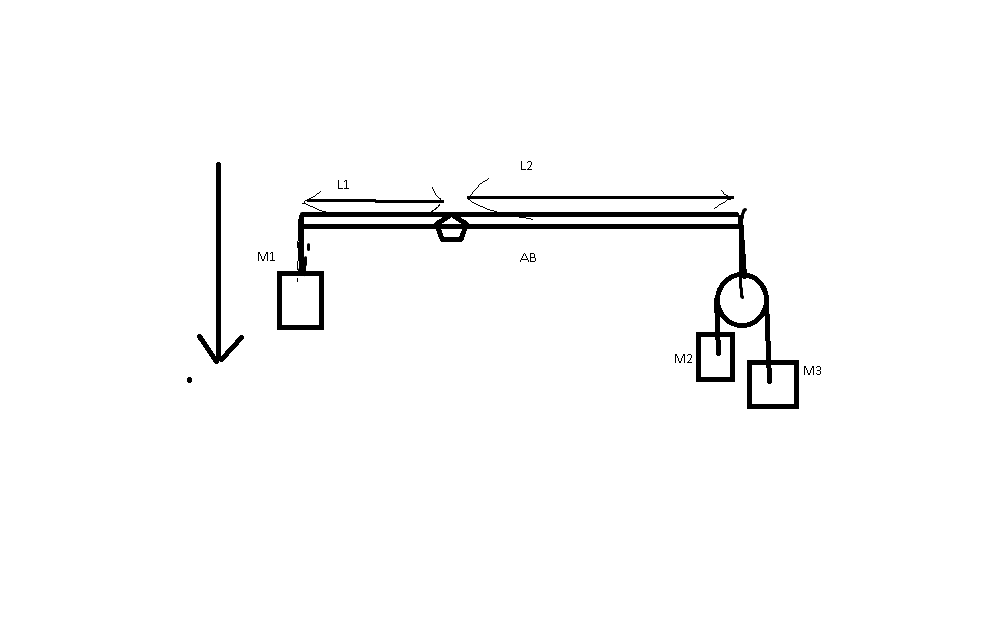 Say the Movement is happening on the direction the arrow points to :

By applying the second law of motion on each mass we get :

And we have $a_2+a_3=2a_1$ (Because the same wire is connected to the three masses, and the part of the wire that is connected to $m_1$ comes from the center of the pulley, relative to an inertial frame.)

going this road didn't get me anywhere, i found that

But why would i set it to zero in the first place? is it because the mass isn't moving? it can be moving, and the masses $m_2$ and $m_3$ would be moving creating an equilibrum. so that's not what's demanded so i think i've gone the wrong way from the start.

The 2nd question is : What is expression of the force applied on the bar by the edge? Thanks to anyone who's going to spend his time giving me some guidance.

As this is an exercise, just a couple of guidelines:

As for your 2nd question, the force is tension of string at point of contact. Strictly speaking, this would be $T_4$ on the right side (string to pulley). But you can easily see that $T_4$=$T_3$+$T_2$ when pulley is not accelerating vertically.

Not the answer you're looking for? Browse other questions tagged homework-and-exercises newtonian-mechanics forces angular-momentum or ask your own question.

0
How to find a constraint equation to relate the two tension forces in this arrangement?
0
Tension in the same string between different masses
0
Forces of tension in a pulley rope system
0
Tension in strings which accelerate 3 masses
1
What is positive rotation direction of a pulley in the Atwood machine?