I am not able to understand why the PN junction does not conduct when reverse biased. Can't electrons travel from the N side through the power supply to the P side where they can jump from one hole to other to traverse the P side and then cross the depletion layer back in to the N region ?

Think about why the diode does conduct current when it is forward-biased.

In that case, there is an electric field pointing from the P-type end to the N-type end. Negative electrons want to climb up the field. The electrons get to the junction and find holes to fall into. Now that the electrons are in the P-type material they can find their way to the electrode and get pushed through the power supply to complete the circuit.

Without any charge carriers, the depletion region acts sort of like an insulator, and the junction acts sort of like a capacitor with an insulator in its gap: once a certain amount of charge has flowed to the sides of the gap, the capacitor is "full" and the current stops. The difference between a capacitor gap and a charge-depleted junction is that if the voltage applied from the battery is removed, the charges on either side of the depletion region will be free to move towards each other and the diode will not permanently store any charge.

Since we're still going back and forth on this I've drawn you some pictures. Here's a silly cartoon showing the distribution of charges in the diode without any applied voltage: 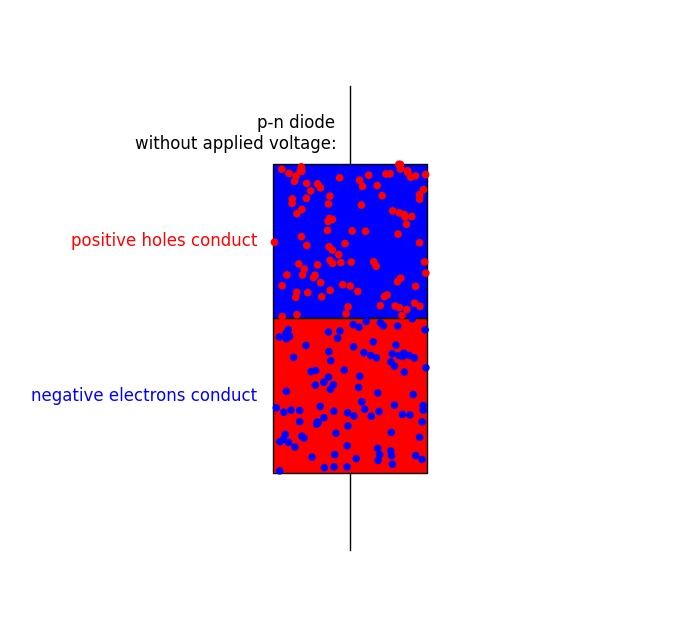 The mobile charge carriers and their substrates are colored according to their charges: the p-type material has conducting positive holes that can move on a negative substrate, while the n-type material has conducting mobile electrons that can move on a positive substrate. (If you're really stuck on this question, I think it might be here: even though we "know" that the p-type semiconductor is made of protons, neutrons, and electrons, the charge carriers are quasiparticles with positive charge and effective mass comparable to the electron mass.) 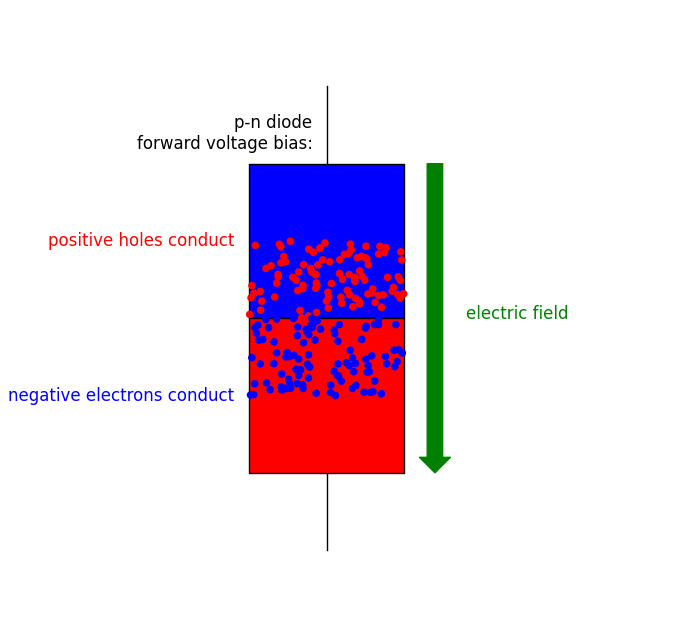 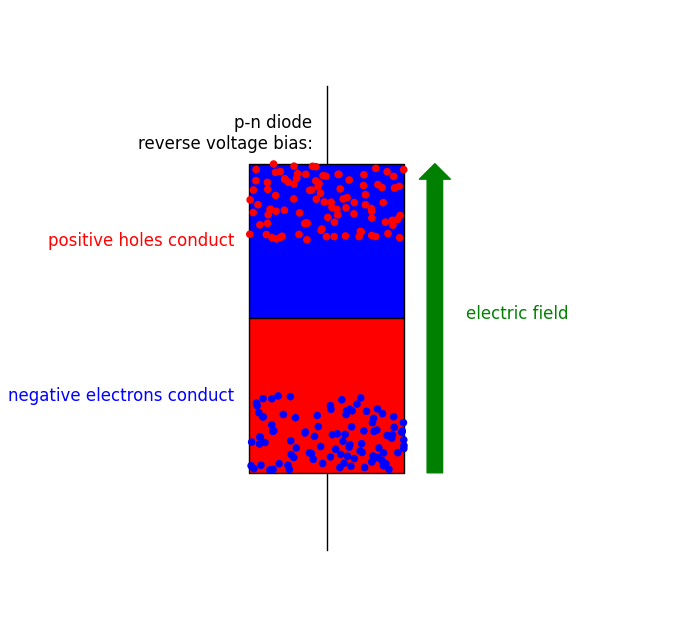 Now the electric field applied by the power supply to the diode pulls both sorts of mobile charges away from the junction. You can't have current flow across the junction because none of the charges near the junction are mobile: the mobile charges have all left, and the remaining charges are fixed to the crystal lattice, as in an insulator.

You ask what would happen to an electron that entered the p-type material from the terminal at the top of my drawing, if the diode is reverse-biased. That electron would fill one of the holes clustering around that terminal. With one hole fewer, the remaining holes are free to cluster a little closer to the terminal. This will polarize the material until the internal electric field vanishes (I suppose my green arrows should have been labeled "applied electric field"), at which point the charge flow stops.

As far as Ī read it, rob’s answer (see above) is basically correct. But Ī’d point on two things: downplayed implications for electrostatic field, and a misconception that the depletion region forms an insulator (rob worded it as “acts sort of like an insulator” that is careful enough, but declined to comment explicitly on the nature of that substance).

From the point of view of band structure, the depletion region consists of a semiconducting substance. There is the same gap between conduction and valence zones as in a regular semiconductor. The thing that makes it to “act like an insulator” is a strong electrostatic field effected by a double charged level. That field brushes carriers of either sign from the region, but due to its semiconductor nature they are persistently created, accounting for a small current that flows through a reverse-biased diode.

A reverse-biased PN junction does in fact conduct current, just not very much.

A reverse-bias voltage depletes the minority-carrier charge concentrations below their equilibrium values, say by a total amount of charge $Q$. Since recombination (with time constant $\tau$) tends to restore equilibrium, a reverse current $Q/\tau$ is required to sustain the depletion.

This reverse current is small because there aren't many minority carriers to deplete. (Conversely, for a forward bias, excess minority-carrier concentrations, and consequently currents, can be large.)

Note that at higher temperatures, the equilibrium minority carrier densities increase, and so does the reverse current.

Update: Re the question of "extra" electrons injected into the P material increasing the reverse current: if such an electron could reach the junction, it would indeed be swept into the N material by the junction field. However, these extra electron can't make it to the junction: their presence would make the P material electrically negative instead of neutral, and so would create a blocking electric field.

There's an interesting and very important device that illustrates this blockage by side-stepping it: a bipolar junction transistor.

Update: This expression for reverse-bias current is an example of stored-charge analysis (see, for example, Gibbons, Semiconductor Electronics, section 6.4.7, or here. Here is a sketch of that analysis.

Stored-charge analysis focuses on the minority charge carrier densities near the junction. For specificity, consider the holes in the n-type material. When the diode is forward-biased, there is an excess of these holes compared to their number when the applied voltage is 0, amounting to an excess charge $Q_p$. This excess charge will recombine in the hole lifetime $\tau_p$. In steady-state, therefore, this charge must be replaced by new holes from the p-region, resulting in a hole current $Q_p/\tau_p$. Similarly, there will be an electron current $Q_n/\tau_n$, and the total current $i$ will be the sum of these two:

where $L_p$ is the hole diffusion length in the n-material, $p_n$ is the minority hole density in the n-material far from the junction, $v$ is the applied voltage, $q$ the carrier charge, $k$ Boltzmann's constant, and $T$ the temperature.

where $A$ is the junction area. Similarly:

$I_0$ is generally a very small current, by design. For forward voltage bias ($v>0$), the current gets large because of the exponential function. Conversely, for a reverse-biased junction, the exponential term asymptotes at 0 and the current $i_{v<<0} = - I_0$.

11
Why doesn't current flow in reverse biased diode?
6
Working of a p-n junction diode when forward biased
4
How does current flow from the emitter, through the base and to the collector in a NPN transistor?
2
Effect of doping on the width of depletion layer of PN-junction diode
1
Conventional explanation of basic Semiconductor & Diode behavior unconvincing
0
Why can't a reverse biased diode conduct by majority carrier injection (UPDATED)?

1
PN Junction Depletion Region
4
How does current flow from the emitter, through the base and to the collector in a NPN transistor?
11
Why doesn't current flow in reverse biased diode?
2
Question about electron-hole pair generation in depletion layer for a p-n junction photodiode
0
Why can't a reverse biased diode conduct by majority carrier injection (UPDATED)?
2
PN junction diode
3
How diffusion and drift current in a PN junction get equal?
0
Why does the depletion region shrink in a forward biased p-n junction diode?
0
What factors affect drift current in a PN junction?