Does wrapping a wet paper towel around a glass bottle really speed up the cooling process?

There are claims like this one that you can improve the cooling speed of beverages when you put them wrapped in a wet paper towel inside the refrigerator/freezer. 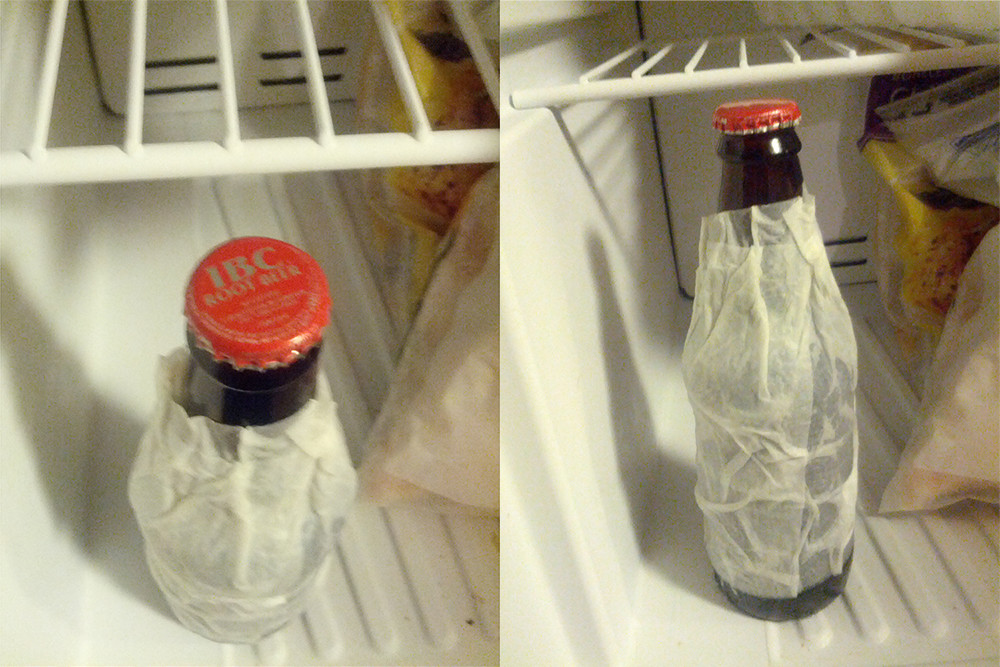 I've just tried it by myself and it seems it does not work as expected, although I might have confused freezer with refrigerator.

Is this kind of an urban legend or does it actually help?

It may actually work, as evaporating liquids need heat to evaporate, and water will somewhat evaporate even in the fridge.

I am not sure it works in practice, because the paper also causes an adverse effect, it provides insulation,

Hard to tell which effect is dominant.

I'm pretty sure that the balance of both effects depends in a very large part on the physical structure of the paper used.
There are multiple independent physical effects in relation to the paper:

There are also relevant effects not related to the paper:

[1] Simplified, the geometry of the cooling element is about the area available to exchange heat. If it is large, a small temparature difference is enough for cooling. That reduces condensation on the element - keeping more moisture in the air. If it is small, it needs to be freezing cold, collecting moisture as ice. A medium size collects moisture by condensing to water - which is often removed through a small drain pipe. (Simplifying by ignoring the influence on convection near the cooling surface.)
Share
Improve this answer
edited Apr 13 '14 at 2:03
answered Apr 11 '14 at 11:34

I actually went ahead and spent some hours experimenting. Used two 500ml aluminum beer cans filled with water at room temperature, 21.4°C. One can wrapped in a paper towel soaked with an additional 20ml of water, one left bare as control. Shoved both in my small, non-ventilated house freezer at -14°C and measured temperature and weight every twenty minutes until water in both cans started forming ice. These are the results. 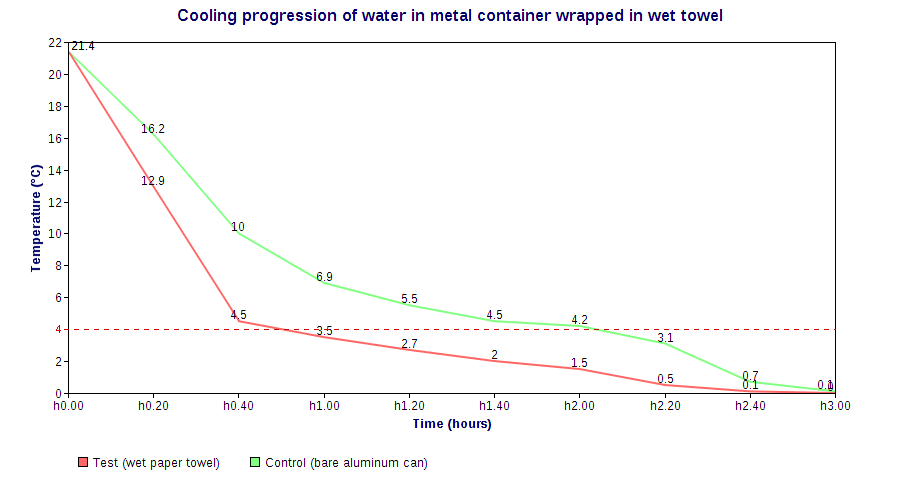 Allowing for some error from my cheap digital food thermometer, the towel-wrapped can cooled quite a bit faster than the control one. In fact, it reached the 4°C serving temperature in about 50 mins, more than an hour earlier than the control can. Notably, by that time it had already lost some 6ml of water, I suppose through evaporation/minor dripping, and ended up losing a total of 10ml by the end of the experiment (the control only lost 2ml).

So yes, the wet paper towel trick does seem to work quite nicely. I'd expect it to work even better if one were to use a ventilated freezer (faster heat exchange) and smaller containers (greater surface/volume ratio).

I also had a properly sealed beer can in there with a wet towel, same starting temperature, and it cooled to serving temp at about the same rate as the other can. A little quicker, because it wasn't taken out of the freezer for measurements until the 1-hour mark, when it was ready to be in my tummy.

Not very academic maybe, but I hope this provides some useful info!

John R. Leeman did a simple study similar to the one described in Andy's answer.

Depending on how you wrap the paper towel it will either have no effect or slow down the cooling of your favorite drink.

This conflicts with Andy's answer. Seems more data is needed.

Even though evaporation gives some bonus boost to the cooling process, the main factor affecting it in this case is the conductivity of water. Water conducts heat way faster than air, so having the beer covered in liquid (through the paper) will conduct the beer's heat to the freezer faster, thus cooling the beer. This is why the trick works way better when the can/bottle is touching the walls of the freezer, or some frozen product you might have inside. Still because air is a poor conductor.

I believe the 'urban legend' you are referring to is about cooling a bottle when you do not have a refrigerator. On a hot and windy day you could store your bottle in the sunlight, but it would be better in the shade, but if you really wanted to cool the bottle by a few more degrees, the 'myth' says wrap it in wet paper or cloth. During the time when the paper/cloth is wet, evaporative cooling should affect the bottle. If paper or cloth dries out -add more water. The stronger the wind, the faster the cooling, and this should be enough to stop your beer being warm, or stop your milk going off too quickly. Putting it in the fridge as you suggested will keep it out of the cooling 'breeze', and the cold of the fridge will also slow the rate of evaporation and hence less cooling effect.

The air in the freezer is a poor conductor of heat. The greater surface area of the porous paper along with its heat conducting water allows it to act as a heat sinc. It transfers heat from the liquid to the glass or aluminium and then to the water in the paper which sheds the energy by conducting it to the surrounding materials such as the air and the floor, as well as via evaporative cooling. It should also be a good idea to maximise the contact area to the back wall of the freezer as it is in contact with the cooling elements, thus increasing the rate at which heat can be drawn from the beverage.

I tested it against a control and it worked. Used longneck glass bottles. Didn't measure the difference but the difference was notable to the touch after half an hour.

Not the answer you're looking for? Browse other questions tagged thermodynamics everyday-life water temperature evaporation or ask your own question.

3
What liquid would wick away heat most quickly?

16
Why doesn't breath condense around poop of flies on the window's glass?
2
Why does a paper towel absorb water upwards?
2
Doesn't the success of statistical physics seem somewhat unreasonable?
27
Freeze water in red-hot container
4
Does folding a paper towel help dry your hands faster by creating interstitial forces?
3
Why does a wet towel become more hot than a dry one?
13
Does shaking a water bottle increase the temperature of the water inside?
0
is boiling point of the gas cause cooling in expansion process of refrigeration?
23
How does rubbing soap on wet skin produce foam, and does it really enhance cleaning?