Use of net acceleration in circular motion

But what is the use of this net acceleration?

The net force (centripetal force plus tangential) associated with the two accelerations can be use to determine whether or not a vehicle will skid while both accelerating and cornering, compared to cornering alone or accelerating alone.

The Kamm circle assumes that the coefficient of static friction is the same both longitudinal and laterally, as well as assumes the normal load supported by the tire is the same for both accelerating and cornering.

The figures are an overhead view of one of the vehicle tires. The vehicle direction of motion is upward. The circle radius represents the maximum possible static friction force, or $u_{s}N$ where $N$ is the load (weight) of the vehicle supported by the tire. 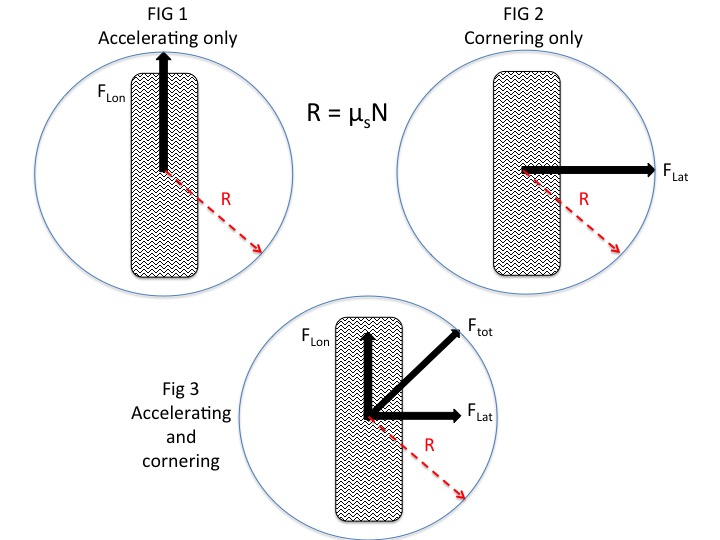 Acceleration if a vector quantity. The time derivative of velocity, also a vector:

There are several uses of it. One is to extrapolate the velocity, say in a predictive filter:

another is to compute the so-called $g$-load:

and also the rejection:

If you are a Formula One engineer looking at telemetry from the car, you need both to understand your car's performance. $ a_{\perp}$ tells you about you cornering, while $ a_{\parallel}$ is important for understanding braking into and acceleration out of the corner.

Not the answer you're looking for? Browse other questions tagged newtonian-mechanics acceleration rotational-kinematics or ask your own question.