Why does higher acceleration minimize a car's fuel consumption?

Until recently, I believed the slower the acceleration, the better the fuel economy. However, my observations seem to contradict this.

Generally, I notice that the acceleration seems to be directly proportional to fuel economy, at least in a new BMW 328i. This is within the bounds of "normal" driving; I haven't experimented much with very hard acceleration.

Some of the gasoline savings came from changing the patterns of gear shifting. ''People were shifting too late from first to second, and from second to third,'' Dr. [V]an der Voort said. People saved the most gasoline when they pushed down on the accelerator briskly and then shifted quickly, keeping the revolutions per minute low -- not by accelerating very gently.

''It's not commonly understood by people who drive,'' Dr. Dougherty said. ''They think that the way to get best fuel economy is to accelerate very gently, but that proves not to be the case. The best thing is to accelerate briskly and shift.

''Don't give it everything the car has, but push down when you're going to shift, using maybe two-thirds of the available power, and change through the gears relatively quickly.'' 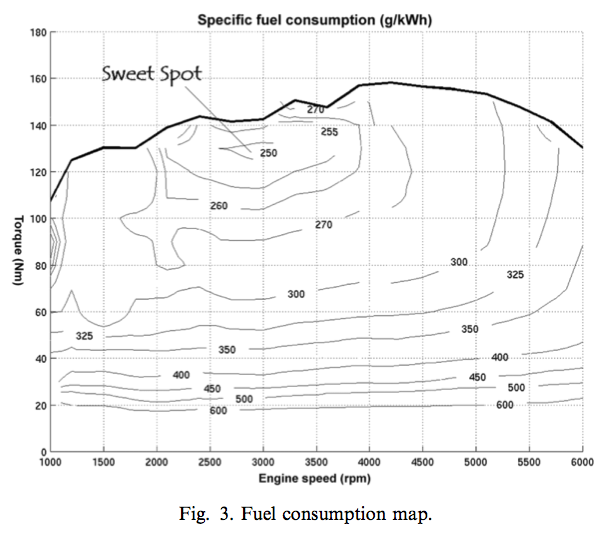 Fuel efficiency varies with the vehicle. Fuel efficiency during acceleration generally improves as RPM increases until a point somewhere near peak torque (brake specific fuel consumption.) However, accelerating too quickly without paying attention to what is ahead may require braking and then after that, additional acceleration. Experts recommend accelerating quickly, but smoothly.

On high way, use cruise control may help.

Engines generally provide better fuel economy at higher RPMs until a point near the peak torque. The more quickly the engine reaches this optimal point, the less time your engine will have spent performing less efficient work, and the better the overall gas mileage.

Your hunch is true for older cars where the fuel dosage would be in linear relation to angle of accelerator pedal - you floor it - you pump the richest mix, and even if a lot of it doesn't burn, or burns while the valves are open, you get maximum acceleration, like 100% power at 180% fuel usage.

New cars have this regulated by computer following calculations of engineers who built the car - while the pedal is to the floor, that doesn't mean the mix is at maximum richness. That just means the mix will be best for quickly accelerating without being wasteful.

If you do it yourself, you're trying to outsmart the computer. That never works very well - you don't let it calculate optimal curve to reaching the desired power by constantly changing the position of the pedal.

There's one more factor: constant overhead. Whether you stop in a jam or drive 100mph, or jump from one traffic light to another, there's always the energy that is constant over time used up by lights, electronics, friction of the gearbox and engine itself, all its pumps etc. The less amount of time elapsed during the trip the less of that you use up. If you drive at economy speed most of the time, you use less fuel.

If an engine is being used for a task which can make use of all the mechanical energy it produces (such as charging a battery or pumping water as quickly as possible from a supply that's sufficient to avoid cavitation), optimal efficiency will be obtained by having the engine run at wide open throttle but having the load torque match the engine torque when the engine is rotating fast enough to allow "smooth" combustion without detonation, but slowly enough that all the fuel can burn during the power stroke. If the engine is allowed to run faster than that, fuel consumption will increase roughly proportional to speed, but power output will not, since an increasing portion of the fuel won't burn during the power stroke. If the engine isn't allowed to run fast enough, then cylinder pressures will get excessively high. Because fuel burn rate increases with cylinder pressures, this will quickly cause pressures to get even higher, resulting in a process called detonation. The excessive forces generated during detonation often end up getting converted not into useful energy, but rather to accelerated wear and tear on the bearings.

While wide-open throttle operation may be optimal for applications that can adjust the load to control engine speed (e.g. an alternator whose purpose is to charge a battery may have its field windings continuously adjusted so that the amount of energy sent to the battery per revolution increases with speed), it doesn't work so well in a car, since the amount of power that is needed to make a car move at a desired speed will vary markedly with driving conditions. Most automatic-transmission cars are designed so that when the driver floors the accelerator pedal, the motor will be operated at a speed which is considerably faster than its maximum-efficiency point. Operating a motor at 6,000rpm wide-open throttle will likely consume fuel more than twice as fast as would operation at 2,500rpm, but will not generate twice as much mechanical power.

In a manual-transmission car, once the vehicle was moving, one could accelerate efficiently by flooring the accelerator between shifts, but upshifting as early as possible without lugging the engine. If one shifts an economy car into 5th gear at 40mph, reaching 65mph will take a lot longer than if one had stayed in 3rd gear to 50mph and 4th until 65mph, but the total fuel required to accelerate to 65mph and drive to a point some distance from the starting line would be reduced [the early-shifted vehicle might take so much longer to reach 65mph that it uses more fuel during that time, but the distance traveled during that time would reduce the amount of fuel required to drive the rest of the way to the destination].

The faster you accelerate the more you interact with the Higgs field. This interaction requires more energy.

Correct me or delete me if I'm wrong;-)