The first law states that

where $\text{d}W$ is the work done by the system on the surroundings.

As far as I remember from my chemistry courses,first law in chemistry is

where $\text{d}W$ is the work done by the surroundings on the system.

For the usual simplifying assumptions where the system boundary has negligible inertia, yes, they are the same. For mechanical work by Newton's third law. $$F_\text{system on surroundings}=-F_\text{surroundings on system}$$

and these two forces act at the same location(s). Therefore

While there are many different systems you can consider (e.g. see FakeMod's answer), in general when the basic form of the first law is described between Chemistry ($\Delta U=Q-W$) and physics ($\Delta U=Q+W$) the two $W$ variables are indeed just related by a negative sign.

To be more precise one would need to be more careful with energy conservation. However, I cannot be more specific without considering more specific scenarios. But at the end of the day work has a precise definition, so when in doubt go back to that.

Referring to mechanical systems, the answer depends on the considered pair of systems and their interactions. If the work is due to contact forces on pairs of contact points with opposite velocities, then the work done by the system on the external system is equal, up to sign, the the one done by the external system to the system as a trivial consequence of the action-reaction principle. That is the case of some gas contained in a cylinder with piston: the system is the gas and the surronding system is the piston.

There are however cases where the contact points have different velocities. It may happen with friction forces: a building block -- viewed as a single material point for the sake of simplicity -- thrown on a rough table. In this case the total work (till the block stops) done by friction force of the table on the block is negative and equals the initial kinetic energy. Conversely, the work on the table (supposed always at rest in the used reference frame) due to the friction force is zero. Here, the contact point changes at each instant but it has always zero velocity.

In summary, the most general way to state the first principle for a system with thermodynamical energy $U$ is $$\Delta U = \cal L+ \cal Q\:,$$ where $\cal L$ is the work on the system and $\cal Q$ is the heat entering the system. This is also valid for irreversible transformations. This is because the principle, in the ideal mechanical case of a purely mechanical system with conservative internal forces, must reduce to a standard theorem of mechanics: the work done on a mechanical system by external forces equals the variation of kinetical energy plus the variation of internal potential energy.

For the sake of simplicity, we will be considering our system as a rigid cylinder (having conducting walls) with a piston, containing a gas. Everything outsid the cylinder shall be considered as the surroundings. The following image gives a visual idea of our system: 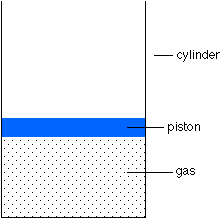 Now, we will consider the following four different cases:

Reversible process with a massless piston

And since the displacements are the same in both cases, thus we can conclude that the magnitude of the work done is also the same, however the sign must be the opposite, since the forces are in opposite direction. This is the most basic and common case one encounters, however, this isn't the only case.

Reversible process with a heavy piston

Heavy is used to signify that the piston isn't massless.

In this case, since the piston is heavy, there can be a non zero net force acting on the piston. Also, since the process is assumed to be reversible, it is necessary that the process must be carried out quasi-statically (in fact, quasi-static-ness is a characteristic of reversible processes). In other words, the process should be carried out in such a way, that the system is in equilibrium with the surroundings at every. This equilibrium implies that the surrounding and the system must have the same temperature at any moment, and the piston should move infinitesimally slowly, i.e. the acceleration of the piston must be zero. So balancing the forces on the piston, we get

Irreversible process with a massless piston

This case yields similar conclusions to the first case. It's easy to see why. In our first case, we never really used the characteristic that the process needs to be reversible. All the arguments made in the first case hold even if the process is irreversible. Thus we can also safely conclude here, that the work done by the gas and the surroundings is equal in magnitude, but opposite in signs.

Irreversible process with a heavy piston

Now, we cannot just extend the arguments in the second case for this case, since the arguments in the second case, do make use of the reversibility of the process. In this case, there is no constraint of the process being quasi-static, and neither is there any constraint for the net force on the piston to be zero. This allows uds to conclude that in the general case,

The above analysis was not a general analysis (and, in fact, it isn't even possibke to do a general analysis in a single answer). However, the above analysis does a good job in showing that the conclusion $W_{\rm surrounding}=W_{\rm system}$ is, in general, wrong. In my opinion, it's not beneficial to draw out any general conclusion about the work done by the system and the surroundings. It's always better, fool-proof and more appropriate to physically determine the work done by both the agents, whenever needed, instead of generalizing a rule which is bound to fail.

To add: the equations differ in sign because the conventional sign for work done is reversed between physics and chemistry books. If the work done on the system is considered positive in physics, it becomes negative in chemistry. This is just a matter of convention; the laws remain the same. Be clear and consistent with the sign when using those formulas, and clearly identify the convention you are using.

Not the answer you're looking for? Browse other questions tagged thermodynamics energy work physical-chemistry or ask your own question.