Confusion regarding the direction of static friction and point of contact

I'm doing a practice question for my Physics 1 class, and after solving this I believe the answer key is incorrect. However, I'd like to confirm this and make sure I'm not incorrectly deciding upon the direction of static friction in my free body diagram; it's not entirely clear to me:

A block is pushed up against a vertical wall by a force of 20N. The force is at an angle of 40 degrees above the horizontal. The coefficient of static friction between the block and the wall is 0.50. Find the maximum mass, in kg, that the force can prevent from sliding down.

Here is my free body diagram: 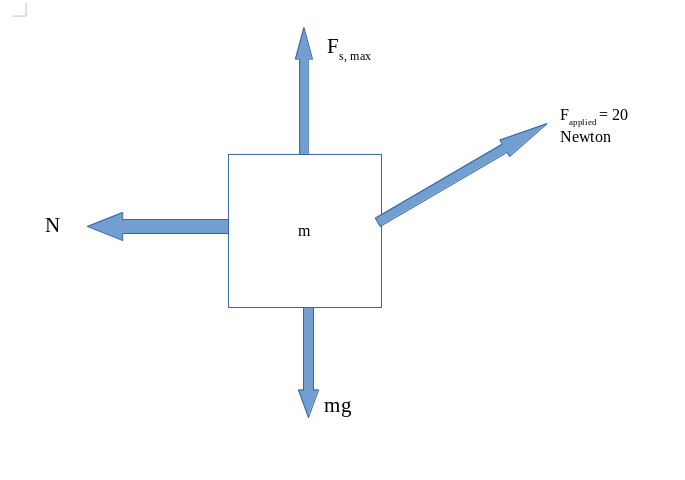 From a little bit of research, it's my understanding that the direction of static friction would be dependent upon whether the vertical component of the applied force $(F\sin(40))$ was greater or less than the weight of the object ($mg$). If $F \sin (40)$ is less $mg$, then the direction of static friction should be upward, and if greater, downward. Adding to the confusion is that the weight of the object, in this case, is an unknown. The problem is asking for the maximum mass.

However, if $F_y > mg$ (if there were no friction it would slide upwards) You can find the minimum mass that is necessary in order to "stop" $F$. So if you assume this:

Which pretty much fit the answer key you have been given. In conclusion, to prevent it from sliding the mass should be between $0.53$ and $2.1$, but the maximum mass to prevent from sliding down is the one you calculated.

Not the answer you're looking for? Browse other questions tagged homework-and-exercises newtonian-mechanics friction free-body-diagram or ask your own question.