Block on a horizontal surface being pushed against a wall

Here is the problem. A block (box) of a mass $M$ being pushed along a floor by a constant force of $F_\text{push}$. Both the static $\mu_s$ and kinetic ($\mu_k$) friction coefficients are given. I know that when the box is moving (sliding), it experiences a kinetic friction force opposing its motion. So if we write Newton's 2nd Law for the block, $ M a = F_\text{push} - F_\text{kinetic~friction}$. Now there is an unbreakable wall along its way; the box reaches (or hits) the wall and stops. But the pushing force is still there - it continues to push the box. What would be the force diagram for the box in this situation? What would be the equation of motion (i.e. Newton's 2nd Law) for the box in this situation? 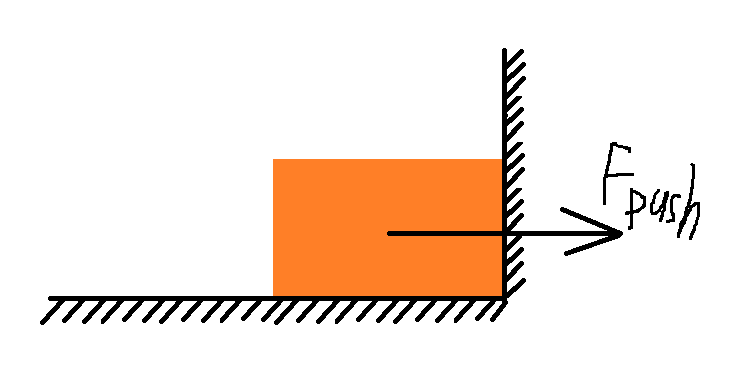 Or should I take a different approach? Like, since the block is "stick" to the wall, it becomes a part of it. So pushing the block means pushing the wall? So there is no horizontal acting forces of friction?

I am confused here.

$Fpush$ $=$ $Nw$ + $Fs$ -------1($Fs$ is force of friction and is static as the block is at rest but you cant say its $\mu sN${$N$ is normal force by floor} , because we do not if the net force is so high that it requires max static friction{its variable with force applied}) no Kinetic friction is considered , as there is no motion.

Note-- equation 1 is for horizontal equilibrium, same you can derive for vertical direction as well

Draw the free body diagram of the block. You'll have vertical equilibrium by default, weight and the reaction force from the ground. Now consider the horizontal.

where F is your pushing force. Since there's no relative motion, this friction must be static in nature.

Keep in mind though, we don't know the value of friction without also knowing F. If F is greater than fs(max), then the frictional force will be at its maximum value.

You only know that friction is static (no movement) and that the sum of Friction + Reactive force is equal to the pushing force, not the individual value of each. So you can treat them as a single force.

Not the answer you're looking for? Browse other questions tagged newtonian-mechanics forces reference-frames friction free-body-diagram or ask your own question.

1
Two problems with free body diagrams. Contradictions (solutions are provided)
17
Block on a block problem, with friction
0
A block on a bracket on a surface
0
Would a block fall down if you hold it against a completely frictionless surface?
1
Does it take more force to keep a mass on an inclined plane at rest than it does to move it upwards at a constant speed?
12
Platinum seems to have higher kinetic friction coef. than static - how is this possible?