How does the source of silver atoms works in Stern-Gerlach experiment?

The Stern-Gerlach experiment used a source of silver atoms. Can you explain what moved the silver atoms from the oven to the screen where their impact was visualised? I am not asking for the deviation in trajectory caused by the magnet but simply why the atoms moved toward the screen.

You place silver in a closed oven and heat it until the silver evaporates. You now have a box of silver atoms going around in all directions. You open a small hole in the oven and point it towards your experiment. Now only silver atoms going in that direction can escape the oven, thus giving you a stream of atoms in that general direction.

By setting up more walls with small holes in them, you can sort away any atoms which are not going in the completely right direction, depending on how well-defined you want your beam to be.

The experimental setup of Stern and Gerlach [1-3] consisted of a furnace in which silver evaporated at a temperature of about 1300C, and an electromagnet with a south pole in the form of a blade 3.5 cm long, in the field of which a beam of silver atoms was deflected - Fig. 1. A beam of atoms was formed during the outflow from the stove through a circular hole with an area of ​​0.003 square millimeters. This beam fell onto a diaphragm in the form of a slit 0.8 mm long and 0.03-0.04 mm wide, made in a platinum foil installed at a distance of 2.5 cm from the first diaphragm close to the front edge of the magnet. The slot was oriented with the long side perpendicular to the blade of the electromagnet knife - Fig. 1 a. A plate was placed close to the trailing edge of the magnet, on which silver atoms were deposited. The installation maintained a vacuum of about millimeters of mercury.A separate experiment on the deposition of atoms lasted from 4 to 8 hours. During this time, the atoms could form a noticeable layer of silver, which was studied under a microscope. 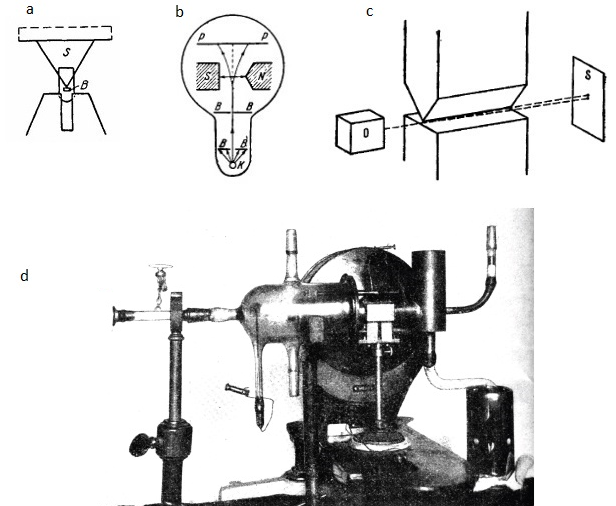 Stern in a number of publications, including [2] showed that the average value of the velocity in the beam corresponds to $$u=\sqrt{\frac{7kT}{2m}}$$

Not the answer you're looking for? Browse other questions tagged quantum-mechanics experimental-physics angular-momentum or ask your own question.