I was reading book On Semiconductor Physics By Donald Neamen,In page 176 He discussed semiconductor that is nonuniformly doped with donor impurity atoms.Now Here 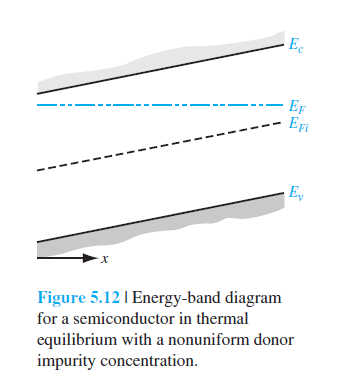 The fl ow of negative electrons leaves behind positively charged donor ions. The separation of positive and negative charge induces an electric fi eld that is in a direction to oppose the diffusion process. When equilibrium is reached, the mobile carrier concentration is not exactly equal to the fi xed impurity concentration and the induced electric fi eld prevents any further separation of charge. In most cases of interest, the space charge induced by this diffusion process is a small fraction of the impurity concentration, thus the mobile carrier concentration is not too different from the impurity dopant density.

There are two things here.

First, see what is happening intuitively.

When they are put together, the extra holes go towards the N region and the extra electrons flow owards the P region.

However, a movement of electrons and holes is not as easy. If an electron moves, it's not just changing the concentration of particles; it is also changing the charge distribution.

The regions are initially neutral. If electrons go to the P region, negative charge starts getting accumulated there. At the same time, possitive charges are being accumulated in the N region. Only near the border in both cases.

So, if charges are accumulating in the border, there is obviously an electric field, from the possitive charges to the negative ones.

That's what is actually happening.

Third. The relation between the field, the potential and the Fermi level.

See the diagram. The bands are now in different energy levels.

There is an electric field through the border.

Of course, that electric field has an electric potential $\phi$ associated with it.

IF an electron wants to rise from the N region to the P region, it has to overcome an electric field, so it must overcome a potential difference.

The work done along that path is obviously $W=q\cdot \varphi$. And that work is the energy difference. Hence

And that's where your formula comes from.

Not the answer you're looking for? Browse other questions tagged semiconductor-physics diffusion fermi-energy or ask your own question.

2
Steady state of diffusion current in semiconductors
1
How does a minority carrier diffuse?
2
Why does a field-effect transistor (FET) with wrap-around gate work at all?
1
Concentration of electrons in conduction band in an n-type semiconductor
0
Non-uniformly doped semiconductor
0
How do holes move across a PN junction?
1
Semiconductor Physics: Depletion region in PN junction
0
Explanation for semiconductors