Does the effect of charge get distributed equally?

A fairly good analogy I can think of is, the earth and its gravitational field. Intuition tells me that if I keep on bringing massive objects near earth from outer space, then the attractive force of earth should not be distributed between the objects, but each object should experience the same attractive force as it would experience if it were alone. (Correct me if I'm wrong)

But this does not seem intuitive for charges. Could someone possibly explain me what exactly happens with the distribution.

There is absolutely no difference between charge and mass. Just as Earth exerts an attractive force on each object, proportional to that object's mass (and Earth mass, too), irrespective of the number or masses of the objects around, so the force exerted by a proton on each electron is independent on the presence of more electrons. However, electrons exert a repulsive force on each other, so the total force on an electron near a proton with other electrons around will be very different than when the proton is alone, but this has nothing to do with the contribution of the proton itself, which is not diminished. Only to the force exerted by the other electrons.

The way I see your problem is that you are not able to develop an intuitive explanation in the case of charges , isn't it?
Well, let's first look at facts and observations: it was found experimentally that whenever we have two charges of magnitude $q_1$ and $q_2$ and if they are separated by a distance $r$ then the force between them (whether it's gonna be attractive or repulsive is a matter of sign of charges) is $$ F= k~ \frac{q_1q_1}{r^2}$$ where $k$ is a constant. And this force always acts on a line joining the charges. Another result was found experimentally, it has been one of the greatest results that was found experimentally and logic alone could never found it, known as Principle of Superposition , it says that no matter how many charges are present the force between two charges is unaltered and hence given by $$ F= k~\frac{q_1q_2}{r^2}$$ .
Let me give you a very counter-intuitve illustration of the above fact: 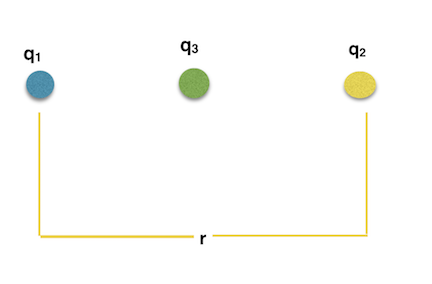 You can see very clearly that there is a charge $q_3$ between $q_1$ and $q_2$ and if we assume that force is something intuitive (I mean contact force like string force, push, pull) and the above fact that electrostatic force acts on a line joining the charges, so it seem very counter-intuitive that force between $q_1$ and $q_2$ remains unaltered due to the obstruction by $q_3$. But the experimental results show that the force between $q_1$ and $q_2$ is still $$ F = k~ \frac{q_1q_2}{r^2}$$ . (Warning: $q_2$ gonna feel a force due to $q_3$ and hence the net influence gonna be the sum of these forces and same is true for both $q_1$ and $q_3$) This verifies that electrostatic force is not something like contact forces (spring forces, tension, muscular pull or push etc.) but something that follows the Principle of Superposition . You can see this video to get some idea about field force.

Now let us assume that we bring another electron near the proton, will the attractive force between the new electron and proton be the same as it was between the previous set of the two, or does it get distributed between the two new electrons?

Yes, if the distance between the new electron from proton is same as it was between old electron and proton. But the total influence on the one charge will be the sum of the influences due to the other two.

Not the answer you're looking for? Browse other questions tagged electrostatics newtonian-gravity charge or ask your own question.

1
Charging by induction (and grounding)?
1
Gravity's tall box with a ball inside - scenario
0
Why do some charges of a charged spherical conductor feel no force from a point charge outside the conductor?
1
The point of charge neutrality in the Hydrogen Atom
0
Electromagnetic force between neutron and proton
0
Intuitive explanation that mechanical energy is conserved in gravitational field
0
Force between two point charges separated entirely by a conductor
0
How would nearby charged rods affect two touching, conducting spheres?