Why is it that a force that acts on two masses can cause both masses to accelerate at the same time?

Technically, though, we can apply a force such that Box A and Box B both move. So the net force acting on box A > $F_{ba}$. How is this possible?

The issue with your reasoning lies in the assumption (or, mistaken conclusion) that $F_{ha}=F_{ab}$. I can imagine why one might be led to think this is true. One might think that the force that the hand applies to box $A$ is somehow transferred to box $B$ due to its contact with box $A$ on which we are applying the force $F_{ha}$. And since this force $F_{ha}$ is simply transferred to box $B$, the force on box $B$ via box $A$ must be the same as $F_{ha}$. However, this is not true for the following reason.

But the force you apply, $F_{ext}$ is external to the system of the two boxes. Since the boxes are on a frictionless surface there is no external friction force acting on the boxes opposing your applied force.

But you also need to consider that when you push on the two boxes they together push back on you with an equal and opposite force again per Newton's third law. In order for that reaction not to cancel your externally applied force, there needs to be another external force, the static friction force between you and the surface, to oppose the reaction force of the two boxes. Imagine trying to move the boxes if you were standing on ice. As long as your external force does not exceed the maximum static friction force between your feet and the surface, you will not slip.

If you look at the bottom diagram showing all the forces you can see that they all cancel each other, except for your externally applied force to the two boxes, and thus

As a matter of fact, it is the static friction force between your feet and the surface that is responsible for you being able to accelerate the boxes. 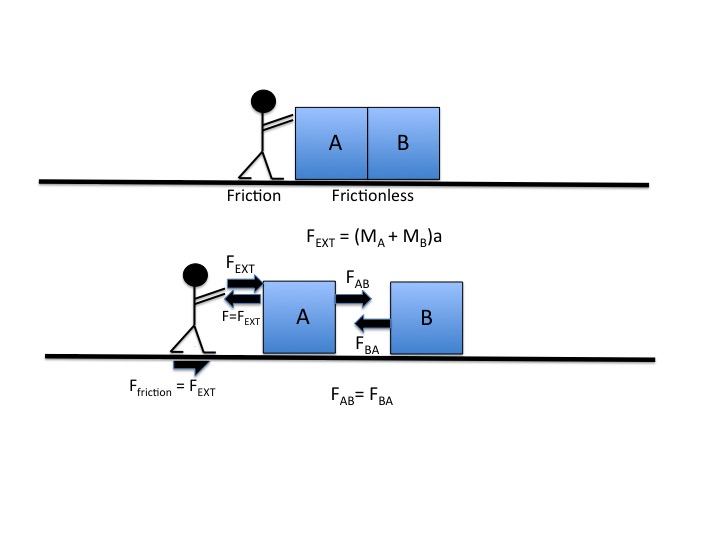 So, internal forces cancell each other and won't produce any acceleration.

If you think about it, you don't need two separate boxes. When you push any object, everý slice of it is in contact with the next one. If reaction forces cancelled external forces, nothing would ever move.

0
Can two bodies move with equal acceleration if forces acting on both are unequal?
1
Why does a reaction force still allow the thing exerting the force to move?
0
Confusion with Newton’s third law
1
Why isn't the entire force we apply on two objects transmitted to the second object?
0
Why is the tension between two masses connected by a rope and undergoing a force along the direction of the rope less than that force?
1
Why does a massless, frictionless piston move from high pressure to low pressure?
0
Problem involving reaction force between two masses