How wide does a wall of ice need to be to stay in place?

Let us say that we have unlimited manpower to construct a huge wall of water ice e.g. 200 m tall (700 feet). -and that the wall is placed in a climate, where the temperature never (for your purpose) goes above freezing point. The wall is to have fairly steep sides, so let us assume a perfect rectangular cross section. A very narrow wall would obviously shatter at the bottom. A very wide wall would approach a natural ice cliff side and thereby be possible.

Any cross section of your wall is supporting the weight of all the wall above it. In a first approximation, every cross section will be in a state of pure axial compression. The most heavily solicited cross section will be the one at the very bottom, which will be supporting a compressive pressure of $\rho h g$, where $\rho$ is the density of the ice, $h$ the height of the wall, and $g$ the acceleration of gravity. You could compare that value to the compressive strength of ice, and use that to determine whether your wall will crumble or not.

Your biggest problem would be to figure out what parameters to use, which apparently are very dependent on how the ice has been formed, what temperature it is in... Just taking a look at the phase diagram of ice, makes it clear that its going to have a complex behavior. It could be turn out that the compression force causes a phase transition of the ice at the bottom of the wall, so that you will then have to consider the top and the bottom sections separately. I have found a couple of very old references, here and here, which I have only skimmed diagonally. But that it is possible to write close to a 100 pages on the mechanical properties of ice kind of tells the story...

As an aside note, if you are willing to sacrifice perfectly vertical walls, having a wall with width growing as $A e^{by}$, where $y$ is vertical distance from the top of the wall, will have every cross section of it standing the exact same compressive pressure. This means that you are using all of our ice to its maximum load bearing capacity, plus avoiding different pressures creating sections with different phases.

We would have to know more about the ice we want to build the wall with.

For example, for ice in icesheets, you have an ice which effectively reaches a plastic region of the stress strain curve at around $0,5 MPa$. I am not a geologist, but I believe that the glaciers can be only thicker than $\sim 50 m$ thanks to it's specific shape and the fact that the surroundings press the glacier back and don't let it crumble (mostly). This would not be the case of a narrow wall, where already at $50 m$ the ice from a natural ice-sheet would crumble away before reaching plasticity (I have a feeling the plasticity will not be caused purely by microscopical structure breakdown but also mesoscopic ice grains breaking each other and moving around).

This study of the US geological survey assesses pragmatically "the crushing strength" of ice and finds that the best ice you find in nature at an ideal temperature has a lower crushing bound at about $\sim 400 \, pounds/inches^2 = 2,8 MPa$.

But our intuition is rightly not satisfied with the vision of the mighty wall of ice with the thickness of a paper sheet. Such a wall would obviously tip over with the slightest blow of air, not to mention a giant riding a mammoth from far north Beyond the Wall. (I assume it is no accident the height is same as the one of the Wall from Game of Thrones :)

It is obvious that a thicker wall makes it less prone to being made a hole into, but let us concentrate on the issue of stability. First, the mere fact that a thicker wall is heavier makes it harder to tip over to a critical angle where the wall falls on it's own. Second, the larger base causes that the tipping angle is much higher and the beginning torque to start tipping it of is much larger. If you draw a scheme of the wall with a thickness $d$ and a height $l$, it is easy to show that for the tipping angle $\alpha_t$ we have $$tan(\alpha_t) = \frac{d/2}{h/2} \to \alpha_t = arctan \left( \frac{d}{h} \right) \,.$$ Or, the tipping angle $\alpha_t$ is always growing with the ratio $d/h$. Furthermore, the initial torque needed to even start tipping of the wall is also growing with the thickness of the wall. The initial torque $\tau$ would have to be $$\tau = F_{proj} l \,, $$ where $l = \sqrt{(d/2)^2 + (h/2)^2}$ is the distance to the lower edge of the wall from the center of mass and the $F_{proj} = M g d/l$ is the part og the weight of the wall with mass $M$ perpendicular to length $l$. The torque required to even start to tip the wall over then is $$\tau = Mgd \,.$$ So the torque required to tip the wall is simply proportional both to the mass of the wall and the thickness. Considering the fact that the mass is also a function of $d$, we have an even steeper growth of stability of our wall with it's thickness.

But beware! The edge over which the wall would be tipping reaches virtually infinite pressure in the process of the tipping. This is a consequence of the fact that the very lower part of the edge over which we are tipping the wall is carrying the weight of the whole wall. We must thus build the wall so that the required $\tau$ to even start tipping it is never reached by an intruder. You do not even have to use so much ice - the tipping base is made effectively larger e.g. by slightly curving the wall around.

Even if we ensure a large enough base, we must be sure the intruder actually does not exert enough pressure to start crumbling the lower edges of the wall. For example, a very brutal gust such as the one detected in Australia could exert a dynamical pressure of roughly $0.9 MPa$. This blow would be surely fatal, but even weaker ones could crumble the wall due to inhomogeneities and uneven distribution of pressure.

Overall, the $700 ft \sim 200 m$ tall Wall from Game of Thrones is just slightly unrealistic. It is hardly imaginable that the technology and coordination of that time would be able to create such consistently ideal ice as we were considering up to now. If anything, my best guess would be an estimate of an overall maximal pressure $\sim 2 MPa$ leading to say a $100 m$ tall stable wall. Taking into account that even stone structures in the medieval ages such as cathedrals were never higher than around $160 m$, even the $100 m$ wall from ice would be formidable. Obviously, Physics is loosing breath here, reasoning requires that Magic had to be involved.

As the Eiffel tower famously shows, a "good" self-supporting structure does not have a uniform section - instead, at every level the size of the supporting surface is large enough to support the weight of the structure above it without reaching a fracture / yield point of the building material. 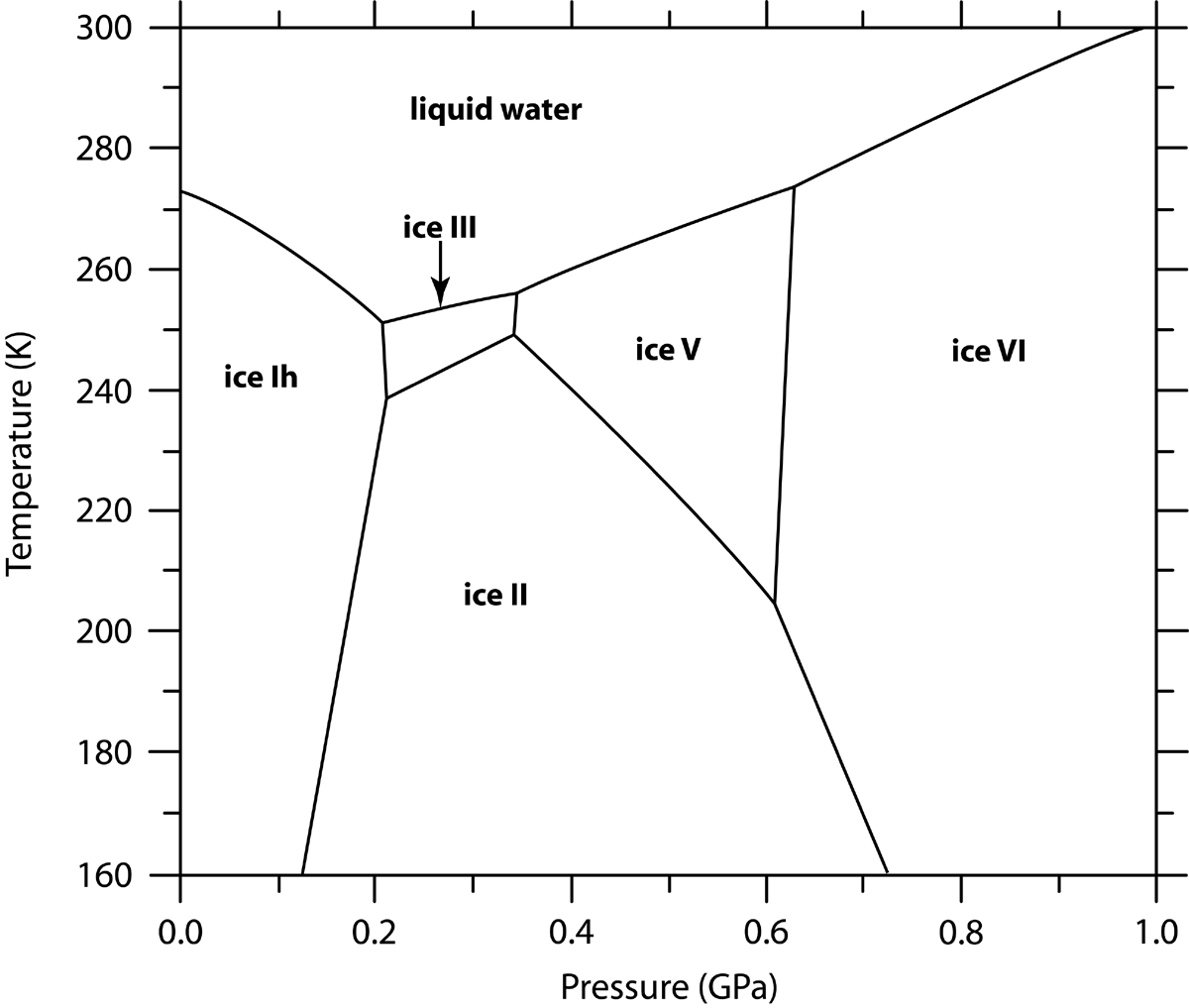 But that is no fun. If you make the ice "not quite strong enough", you can still make a tall wall by changing the shape of the wall - thicker at the bottom, thinner at the top. As I said above, an exponential shape is "ideal", but you could do the calculation for a triangle: ice with density $\rho$ in a triangular section of base $b$ and height $h$ has a mass of $1/2 h b $ per unit length, and thus exerts a pressure of $1/2 h$ regardless of the width of the base. You just built a wall that was twice as high for a given strength of ice, using pretty basic mathematics - and you would have a reasonable chance of building such a wall with accurate dimensions even with relatively unskilled labor (see pyramids for other examples of such a shape...).

Speaking of pyramids - they discovered another mechanical problem when building too tall and too steep: the shear stresses in the material could cause a slippage that would collapse the pyramid. Initially built at 54 degrees, the Egyptians discovered - with the fatal collapse of the Meidum pyramid which was also built at 54 degrees - that it was unsafe to build a pyramid too steeply. Ever practical, they just continued with a shallower 43 degree angle. 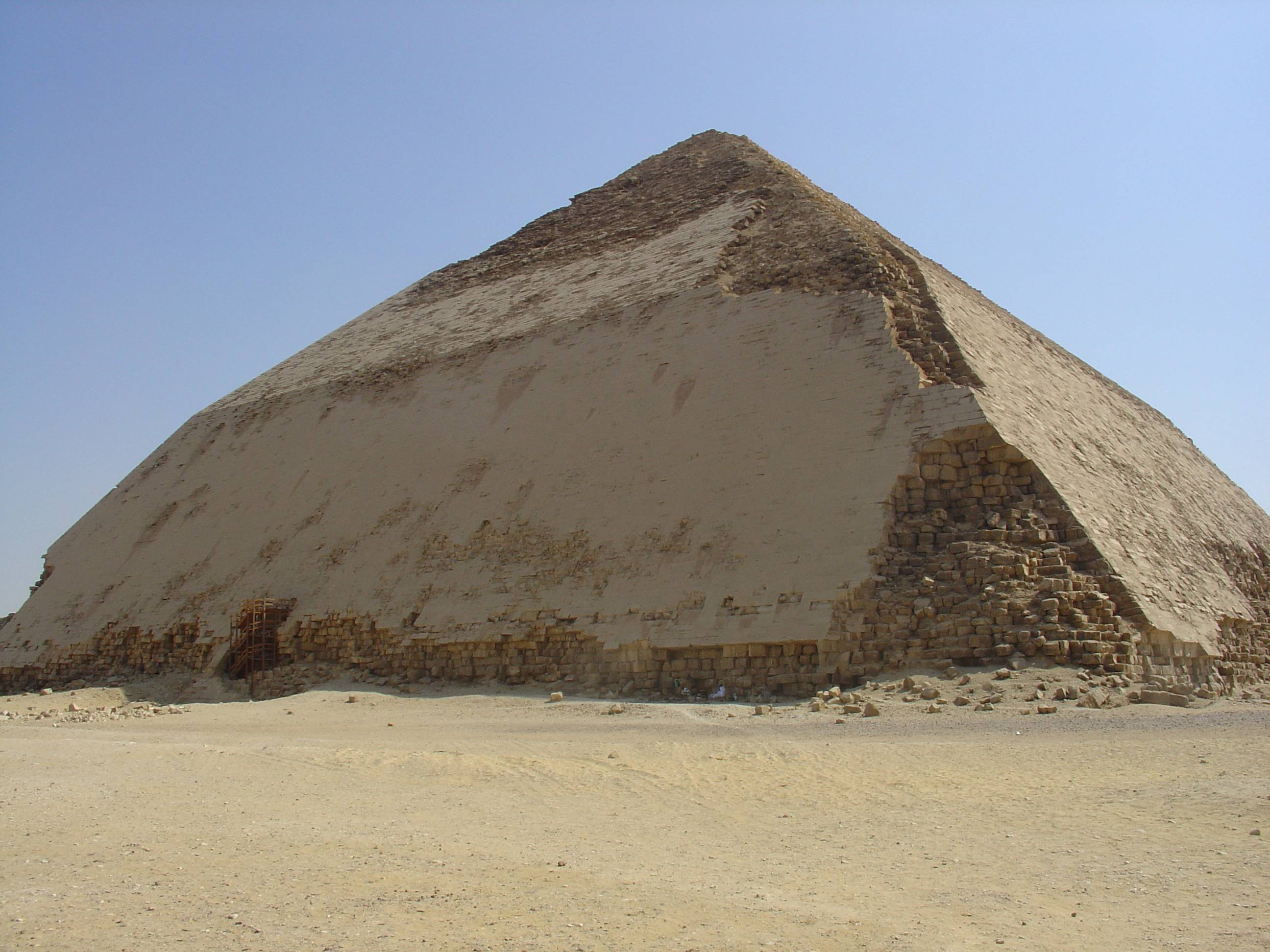 Attribution: Original uploader was Ivrienen at en.wikipedia - Transferred from en.wikipedia; transferred to Commons by User:Leoboudv using CommonsHelper.. Licensed under CC BY 3.0 via Wikimedia Commons.

Incidentally - the strength of ice is a function of the rate with which stress is applied:

This is a terrible graph if you want to build tall walls out of ice - because it says that the tremendous strengths that you were promised by the materials scientists simply do not hold at low strain rates (in other words, in the limit of "an eternal wall", things will slowly flow to the ground). Note that this becomes significant at rates below $10^{-6}$ - the equivalent of the 200 m tall wall shrinking by $200 \mu m / s$, or 17 meters per day. Ouch...

The above graph came from an interesting paper on the strength of ice: http://www.tms.org/pubs/journals/JOM/9902/Schulson-9902.html which contains a ton more interesting information. Probably the most fun factoid is the fact that they investigated the use of giant man made ice bergs to function as aircraft carriers during WW-II. Although no such ship was ever built, it was discovered during the research that adding a small amount (4%) of Canadian spruce pulp could double the strength of the ice, and more importantly vastly increased the impact resistance - important for an aircraft carrier, and for the ice wall of a fortress, say. In fact, weight for weight it gave ice the shock resistance of concrete. Nice - a low tech composite.

So - if you want to build your wall:

Assuming "that ice behaves as a deformable plastic material, which means that there is a critical shear stress, below which no strain (deformation or flow) will occur", Weertman derived the equilibrium profile of an icefield such that stress does not exceed the critical value. He found that the height is approximately $$h = \sqrt{\lambda L}$$ where $\lambda$ is about 10 metres and $L$ is half the width. Thus, a non-flowing icefield 200 metres high would need to be 7 km wide. According to the Wikipedia article, beyond the critical stress the flow rate increases as the cube of the stress, so a much narrower wall would slump rapidly towards an equilibrium profile.

Not the answer you're looking for? Browse other questions tagged forces continuum-mechanics stress-strain density ice or ask your own question.

-3
Can we build a space tower out of ICE?
3
How high can be tower or building?
0
How tall is the tallest Jell-O structure possible?

37
Ice skating, how does it really work?
14
How fast does an ice cube melt in a microwave?
2
Why does salt on snow create Ice?
18
Why does ice have a lower density than water?
1
How does ice become thinner inside a no-frost fridge?
4
Why does stress need to be described with a tensor?
0
Does increasing the stroke of a pneumatic cylinder create a need for a thicker wall?
7
How does ice melt when immersed in water?