Force and momentum of water striking a water wheel?

Imagine water striking a water wheel. We can find the torque applied by calculating the force of the water and multiplying by the distance from the center.

To make the question easier, let's assume that a large drop of a certain mass m hits a stationary water wheel. Do we consider the water drop's final velocity to be zero at the point of impact? If not, how can we conceptually and mathematically determine the change in momentum, without experimenting?

It is possible that there are other factors, such as static friction of water wheel or mass of water wheel, however, I am not sure what is needed to be accounted for, so if anyone can improve this problem, please comment of edit.

Thanks for any help. 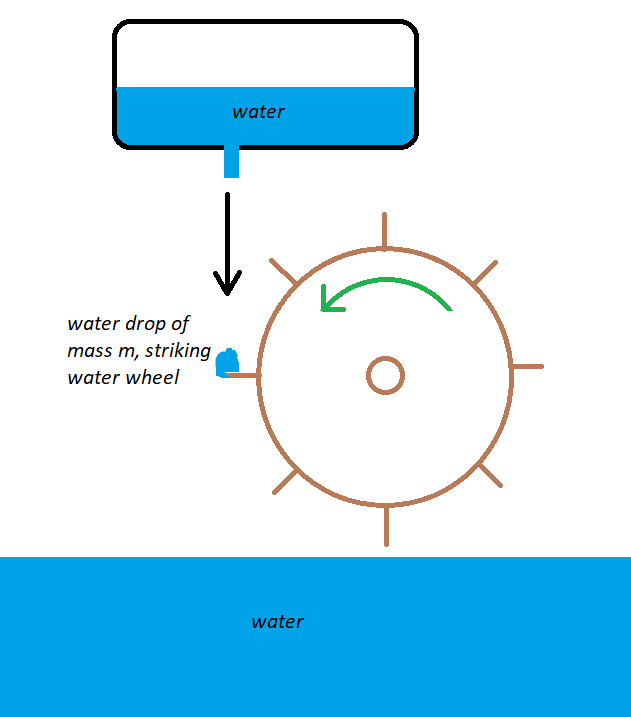 The "correct" change in momentum depends on the exact shape of the water wheel, so your mileage may vary. However, a very reasonable first pass would be to assume the water "sticks" to the waterwheel. In this case, we can assume that the momentum of the water after the collision is exactly equal to the mass of the water multiplied by the tangental velocity of the wheel at the point where the water stuck.

However, given that you have a wheel rotating around a fixed point, it is easier to think in angular momentum. Angular momentum is also conserved, and the math is simpler. If you try to do this with just momentum, you'll have to consider how the forces are transmitted to the axel of the waterwheel. It'll yield the same answer, but using just linear momentum will require more math.

Of course, this is only one effect. In a waterwheel like you have drawn, with no buckets, this sticking would only be momentary before the water rolls off. If there are buckets, we also have to consider that the water keeps acting on the waterwheel until it reaches the bottom. There are many ways this can be modeled, but energy may be the best way to do it. You can model the loss of gravitational potential energy as the bucket of water reaches the bottom of the wheel, and then look at how much kinetic energy is lost when you let the water go.

In a more complicated system, the water might splash or divert off at an angle. In such cases, you would need to take care to make sure it is modeled correctly.

Not the answer you're looking for? Browse other questions tagged newtonian-mechanics forces newtonian-gravity momentum water or ask your own question.

1
When should we use the concept of Impulse/Momentum instead of Force?
3
Impulse and Change In Momentum — Are they really different?
1
Force to deflect ball colliding with wall
3
Gyroscopic Force/Torque of a Constrained Wheel
1
How to calculate the Force exerted by a falling body?
0
Momentum change of a ball during rebound
0
When finding the force of a falling raindrop, how to account for not knowing the collision time?
0
How is force exerted by an object in collision calculated?