Inertia on a rotating disc?

If I toss a ball upwards in a train moving with uniform velocity, the ball will land right back in my hand. This is because the ball has inertia and it continues to move forward at the speed of train even after leaving my hand.

Now consider I'm standing on the outer edge of a rotating disc (merry-go-round). If I toss a ball upwards, it doesn't fall back in my hand. Why? Doesn't it have a rotational inertia (is that even a term?) to continue rotating even after I let go of it? Is the ball going to land on a new location on the disc? Or is it going to fall away from the disc? At least the ball should have inertia of tangential velocity at which I tossed the ball upwards, right? So the ball should fall away from the disc? Can someone describe what happens in this situation?

The idea of a rotational inertia is inappropriate for the ball when you are on the disc as there is nothing trying to make the ball rotate after the ball has been released.

By the way, what you call rotational inertia is called moment of inertia and for a particle of mass $m$ at radius $R$ it is $I=mR^2$. When you release the ball, it is no longer affected by any force $F$ and therefore there is no torque $\tau=RF$ from your hand and consequently it would have constant angular momentum $L=\omega I$. 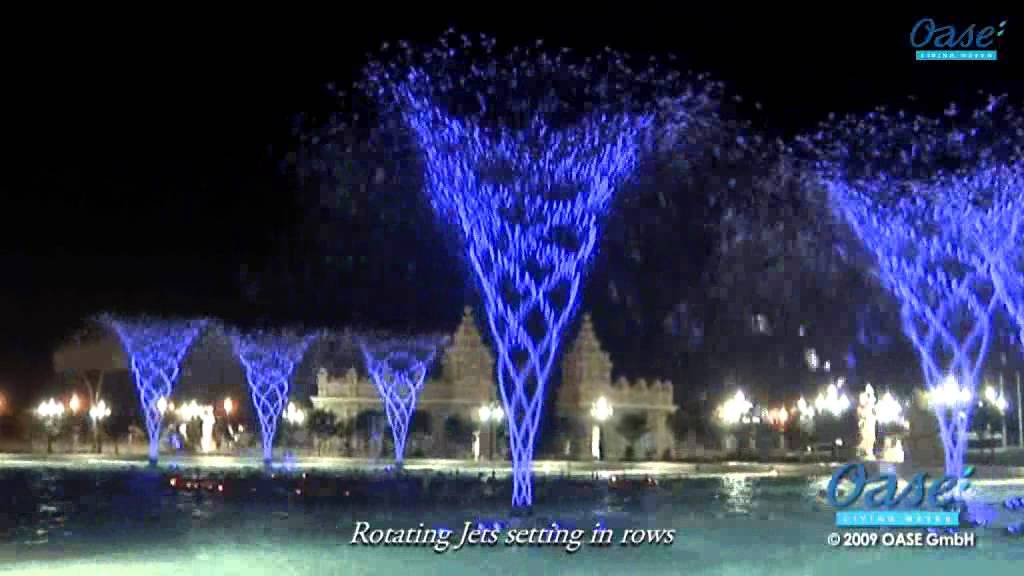 Water drops are ejected from a rotating nozzle. Once a drop is ejected from the nozzle, it follows a parabolic trajectory (let's ignore air drag) in a vertical plane. The drops fall outside of the vase shape but we don't see them well.

We don't see this trajectory when we take a picture, though. What we see is the locations of all the drops at a given instant ("streaklines"). They seem to have the "rotational inertia" you're talking about even though it's just an illusion.

From Newton's laws, we know that an object in motion will travel in a straight line unless acted upon an external force. On the merry-go-round, you are constantly changing direction; i.e., your direction is always tangential to the center of rotation. If you draw a velocity vector at different times on the merry-go-round you will see this clearly. Thus the moment you release the ball it continues in a straight line, with its initial velocity, tangential to the center of rotation at the moment of release.

There is something called "rotational inertia" more commonly referred to the "moment of inertia", however, it is not as you describe. It a measurement of the inertia of a rotating object--that is the resistance to changes in angular acceleration (increasing or decreasing rotation speed). You can think of it this way, a very light piece of material (say foam) will be easy to spin, however, a large block of granite will be harder to spin. When I say easy and harder, I really mean easy/harder to accelerate into a spinning motion. Similarly, trying to stop the granite while spinning will be harder as it has a higher moment of inertia (because of density in this case). This is the principle behind flywheels, the storage of energy in a rotating member.

Even looking at these cases, the individual particles (atoms) all experience centripetal acceleration towards the center because the atoms are connected. If they were not connected the atoms would fly away in a straight line just like the ball does. In your example.

See this for example: high speed disintegration of a compact disk.

So we can say that Newton's Law describes the fact that all particles want to travel in a straight line. Rotation is possible because we exert a force on a particle to change its direction, but the particle itself wants to continue on a straight line path.

Not the answer you're looking for? Browse other questions tagged newtonian-mechanics rotational-dynamics reference-frames inertial-frames inertia or ask your own question.

6
"Artificial gravity" on a rotating space stations
13
Throwing a ball upwards in an accelerating train
9
Why does tossing a coin in a train and on a train differ?
0
Angular velocity of disc from induced motion
3
Inertial reference frames vs. non-inertial reference frames
0
What happens when the centrifugal force and Coriolis force combine?
1
Dynamics in a circular disc dilemma
0
Inertia of an elevator