Why doesn't a ball thrown horizontally have a greater speed upon hitting the ground than one thrown vertically if they are thrown with same speed?

The question below shows the velocity of three balls projected in different directions will be the same upon hitting the ground.

Why isn't the velocity of the ball thrown horizontally the greatest? 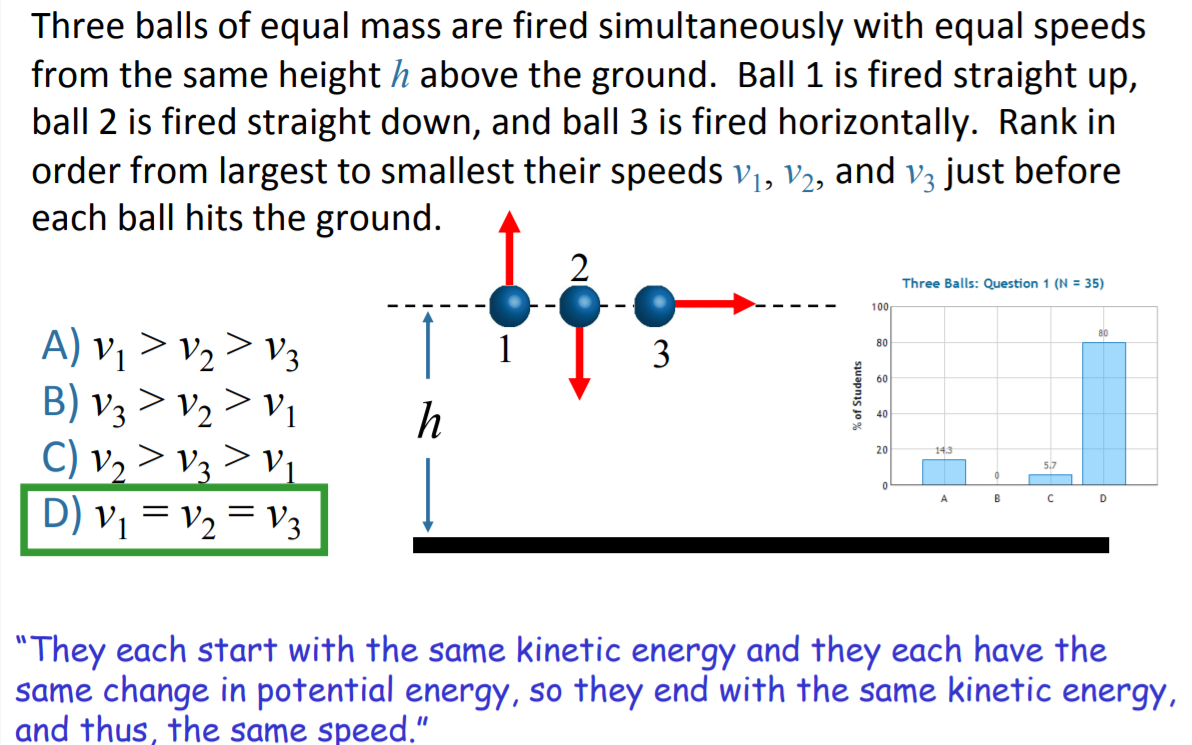 EDIT: After the prompts in the comments, my calculations would go like this:

Only ball 3 has a horizontal component of velocity too.

Where a = acceleration due to gravity = g, t = time, u = initial speed, x = horizontal component and y = vertical component.

The key here is the fact that the ball going down is 'fired straight down'. In other words it isn't just dropping with the force of gravity, but with an initial velocity already given to it. Due to the SUVAT equation $v=u+at$ we can see that this initial velocity is added to what it would've been if it was just left to fall. In the answer you have given it says "They each start with the same kinetic energy". This means that each ball is fired with the same initial velocity. Let's work through this mathematically. The height that the ball fired up reaches is $$s=\frac{u^2}{2g}$$ Taking $g=10$ for simplicity, we can say that the ball reaches a height of $0.05u^2$. Using the equation $$v^2=u^2+2as$$ we can calculate it's final velocity, which comes out to be $$v^2=0+2*10*(0.05u^2+h)$$ or $$v=\sqrt{u^2+20h}$$

So all balls end up with the same speed at the end. It is much easier to do this sort of thing as a change in energy, however this way is also an effective method of proving it.

Conservation of energy provides a second way, a sanity check.

Allow the gravitational potential $U$ energy to be 0 on the floor and $mgh$ on the ledge.
Each ball starts with the same speed $u$. So the energy of each ball at the beginning is:

The energy when they reach the floor is:

By conservation of energy, these to quantities must be the same:

So, conservation of energy not only tells us that the three balls will have the same speed when they reach the floor, but it tells us exactly what the speed will be. Crucially though, it does not tell has what the velocity is, in other words, we still don't know how fast each ball is moving horizontally or vertically. We know the length of the vector, but not its direction.

However, we can answer your question "why do all the balls have the same velocity when they reach the floor?" By noticing that they all start with the same energy, and convert the same amount of potential energy into kinetic energy.

You are given four answers to choose from. Without needing to do any calculation if you examine balls 1 and 2, where ball 1 is fired straight up and ball 2 is fired straight down, and assume no other effect (air resistance, etc.), then ball 1 will have the same speed as ball 2 when it returns to its starting point. From this point both are acted on by gravity over the same distance (to the ground) and the only answer where v1 = v2 is D.

At this point, even if the question has an error, there are no alternate answers. And you could substitute some values and calculate all three cases. And you should find that the change in vertical velocity for ball 3 is different than balls 1 and 2, and that the resultant speed is the same.

And if you include simple friction from the air then when ball 1 returns to its starting point during its fall then it will have a lower speed than ball 2. From this point both are acted on by gravity over the same distance (to the ground) and ball 2 will have a higher speed than ball 1 (unless it's the case where the initial velocity is higher than the terminal velocity and the ball slows down). But you lack the information to calculate all of this and can assume the first (frictionless) case (where v1 = v2 and answer is D).

And there is always the case where the height is great enough and the effects of passing through air (instead of assuming a vacuum / no friction) result in all three balls reaching terminal velocity before they reach the ground and thus (again) v1 = v2 = v3.

Not the answer you're looking for? Browse other questions tagged newtonian-mechanics energy-conservation projectile speed or ask your own question.

1
Force on a ball hitting the ground with acceleration $g$ at varying heights
0
Which ball will hit the ground first?A ball simply dropped or a ball thrown across the room?
0
Projectiles with unequal initial velocities, purely horizontal
4
Weird projectile motion question
0
A Problem on Projectile motion