Can compressed air be used to make an object “float?”

Imagine a container filled with highly pressurized air. Now imagine that there is some object, maybe a marble, inside the container. Is it possible to cause the marble to "float" within mid-air, due to the forces of the pressurized air acting on it in all directions?

I imagine this would also depend on the shape, size, and pressure of the container, as well as the shape and size of the objects inside. 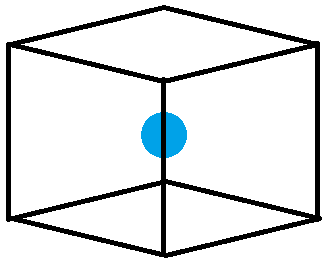 In practice it probably depends on the temperature, but let's assume not real air, but an ideal gas. Then, all you have to do is to increase the pressure enough for it to have the same (or infinitesimally higher) density than the marble: at this point buoyancy equals the weight of the marble and it can "float".

That will not depend on the shape or size of the object inside, only on its density.

As for the spread you describe, unless there's some sort of flow in the container, there has to be some effective attraction to the wall.

Just generally, the density of the "fluid" in which the marble's floating has to be greater than the density of the marble. But air liquifies first, see https://en.wikipedia.org/wiki/Triple_point I don't know if there's any high-enough temperature where air wouldn't liquify before reaching a typical marble's density.

See the other answers about increasing pressure until the density of the gas is equivalent to that of the object.

The number of states (e.g., position) of the marble that would count as "near the edges" is vastly, vastly larger than the amount of states that we would consider "at the center". Now, divide the volume into an arbitrarily fine grid of voxels (like 3D-pixels) and label each one either "near the edge" or "near the center" by whatever definition you please. You will have hugely more voxels labeled "near the edge".

Unless you actively stabilize the marble in the center, any wayward motion of the marble will put it at a more or less random other place. If we assume that nothing influences it after getting a little nudge in a random direction with a random amount of energy, then it will bounce around like a 3D billiard ball and eventually come to rest somewhere after some of the energy is bled off through collisions with the box (large effect); and the rest by the constant bombardment of gas molecules (minuscule effect, but it is still there).

Simply counting the voxels, it is much more likely that it will come to rest in one that is labeled "near the edge" because there simply are more than those around than the few "in the center" voxels.

(N.B. to address a technicality mentioned in the comments: the above is slightly simplified; in practice you would need 3 categories ("close to the edge", "at the center", "in between"). If the box gets large, a large amount of those voxels would be "in between". Still, the amount "at the center" would be basically constant and very small, while both other categories grow. So you see why it is at least highly improbable that wherever the marble goes, it will not be at the center, or at any other specific place.)

Not the answer you're looking for? Browse other questions tagged pressure buoyancy fluid-statics levitation or ask your own question.

4
Can i use coils with compressed air to make a superconductor?
5
Keeping air in a giant gravitationally-bound space balloon
7
Buoyancy of compressed air
2
Compressed air cans vs regular compressed air
15
Can a ship float in a (big) bathtub?
2
Should this object float?