How do radio waves physically “travel”?

If sound waves physically travel by one molecule bumping into another and the chain reaction eventually reaching my ear, how is a radio wave emitted and how does it "move"?

They are self propagating. An oscillation in the electric field results in an induced one in the magnetic field, and vice versa repeatedly. Thus, it propagates itself through space with these repeated inductions regardless of physical surroundings.

A radio wave is an electromagnetic wave ( EM wave ). EM waves are of different categories depending upon their wavelengths and the one with the longest wavelength is the radio waves. Unlike sound waves which is a mechanical wave which require an elastic medium to travel, electromagnetic waves consist of synchronized oscillations of electric and magnetic fields. The electric field and magnetic field oscillates perpendicular to each other and the direction of propagation of the EM wave is perpendicular to both the direction of oscillation of the magnetic and electric field. 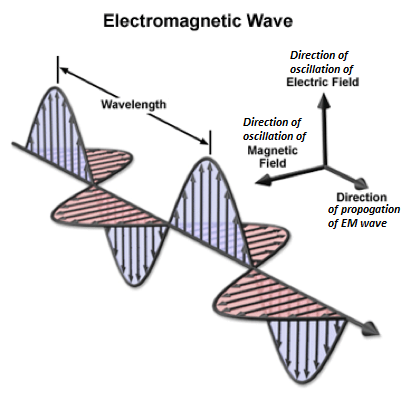 The energy of the wave is transferred as oscillating electric and magnetic fields.

You may note that any accelerating charges can create ripples of oscillating magnetic and electric fields. But, to get a well defined EM wave, an oscillatory motion related acceleration is required.

This would be of more help : https://en.wikipedia.org/wiki/Electromagnetic_radiation

Not the answer you're looking for? Browse other questions tagged electromagnetic-radiation radio-frequency or ask your own question.

40
If both radio waves and gamma rays can travel through walls
9
Do radio waves travel around the Earth or through it?
20
How do you make a spherical radio wave?
2
Spectral decomposition of radio waves and quantization
0
How is information transmitted by radio waves (how radios work)?
1
What are crystals used for in radio?
0
Cancel out radio waves
0
How do electrons in a conductor physically respond to radio waves?
0
How does Event Horizon Telescope filter to get only the radio waves emitted by the target black hole?