this is a very short question, probably I'm missing something really simple: according to Drude model, we have for the drift velocity of electrons, being also the average velocity: $$ v_d = \frac {-e E \tau } m ,$$ where $ \tau$ is average free path time. Now, how can this be the average electron velocity? This velocity comes from the whole momentum increase during the free path, shouldn't we consider the average electron being only at half of the path, dividing the velocity by 2?

This is often a puzzle which can be solved in the following way.

In the derivation it is assumed that immediately after a collision an electron has zero drift velocity and then because the acceleration $\dfrac {eE}{m}$ is constant the electron has a speed of $\dfrac {eE\tau}{m}$ after a time $\tau$ which is the average time between collisions.

So the erroneous argument goes as follows.
There is constant acceleration, the electron starts from zero speed and reaches a speed $\dfrac {eE\tau}{m}$ after a time $\tau$ and so the average speed is $\dfrac 12\dfrac {eE\tau}{m}$.

However what is missed is the fact that not all electrons accelerate for a time $\tau$.

This is illustrated in the graphs below. 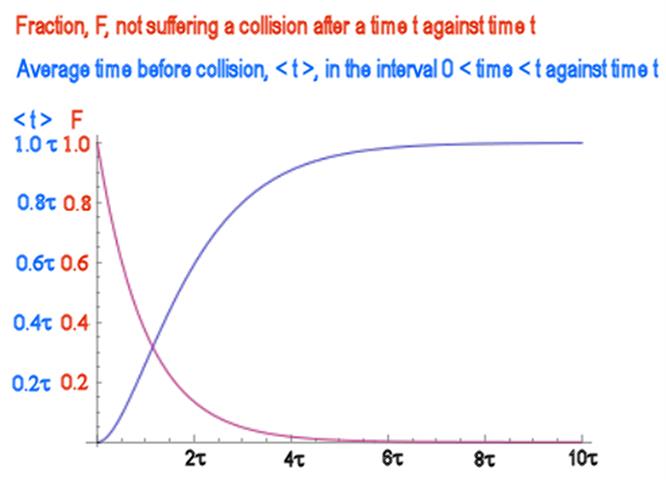 So only about $13\%$ of the electrons travel for a time longer than $2 \tau$ and yet they have a large effect on the average time between collisions.

The situation that electrons find themselves in a metal is similar to that of unstable nuclei and the mathematical analysis is very similar.

The decrease in the number during that time interval is $N(t) \dfrac{dt}{\tau}$.

For the electrons the rate at which electrons collide (equivalent to nuclei decaying) is proportional to the number of electrons and the constant of proportionality is $-\frac 1 \tau$.

This is exactly what is wanted because for electrons

$\left( \vec v_{\rm final} \right)_{\rm average}$ is the drift speed $v_{\rm d}$ on top of the random thermal motion of the electrons which averages out to zero. 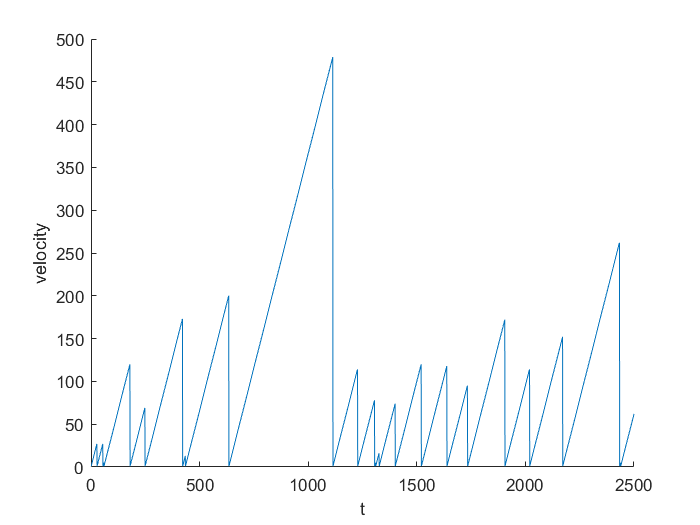 The larger the velocity, the longer that free travel lasts in the time line.

By calculating the average velocity with $\frac{1}{2}a\tau$, you simply assume that each free travel accounts equally in duration, which is incorrect.

So the correct average velocity is $a\tau=100$.

By the way, the simulation of 1000 electrons show that the velocities distribution at any time is also in accord with $\frac{1}{\tau}e^{-t/\tau}$. 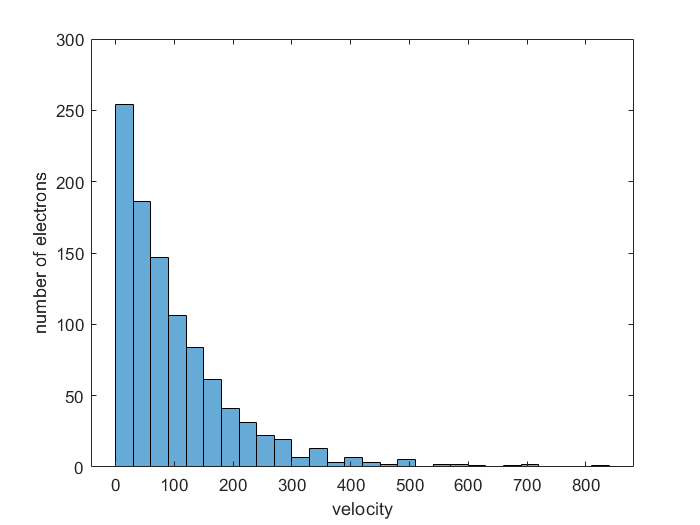 Average here really means thermal average. Free electrons in a metal move in random directions with thermal velocities of the order of $10^6-10^7m/s$, according to the Maxwell distribution. These are huge velocities, but the average velocity is zero. When an electric field is applied, the distribution slightly shifts (as described by the Boltzmann's equation) to a non-zero average, which is called the drift velocity.

Not the answer you're looking for? Browse other questions tagged electric-current electrical-resistance classical-electrodynamics conductors or ask your own question.

1
What is the correct formula for drift speed of electrons
0
Derivation of drift velocity
3
Question regarding Drift velocity in general?
4
Drift velocity question
0
Increasing the Voltage, Ohms law, what am I missing?
1
Why is the drift velocity directly proportional to the electric field?
1
How to (hypothetically) calculate $\tau$, the mean free time?
0
Drude model electronic drift momentum rigorously derived