Why does rainwater form moving waves on the ground? Is there a name for this effect? [duplicate]

Ask Question
Asked 5 years, 3 months ago
Modified 3 years ago
Viewed 7k times
85
$\begingroup$
This question already has answers here:
Why do rain waves form and what is their connection to the texture of the surface they're on? (3 answers)
Closed 5 years ago.

A while ago it was raining and I noticed that, on sloped pavement, water was flowing in very regular consistent periodic waves, as you see below.

However, I realized I had no idea why this should be happening. There was nothing uphill actually creating these waves, and they continued down as far as the pavement went, despite the rain that was falling on them along the way. Why wasn't the water flowing down smoothly, or irregularly?
What causes the noticeable wavelike patterns? Is there a name for this phenomenon? 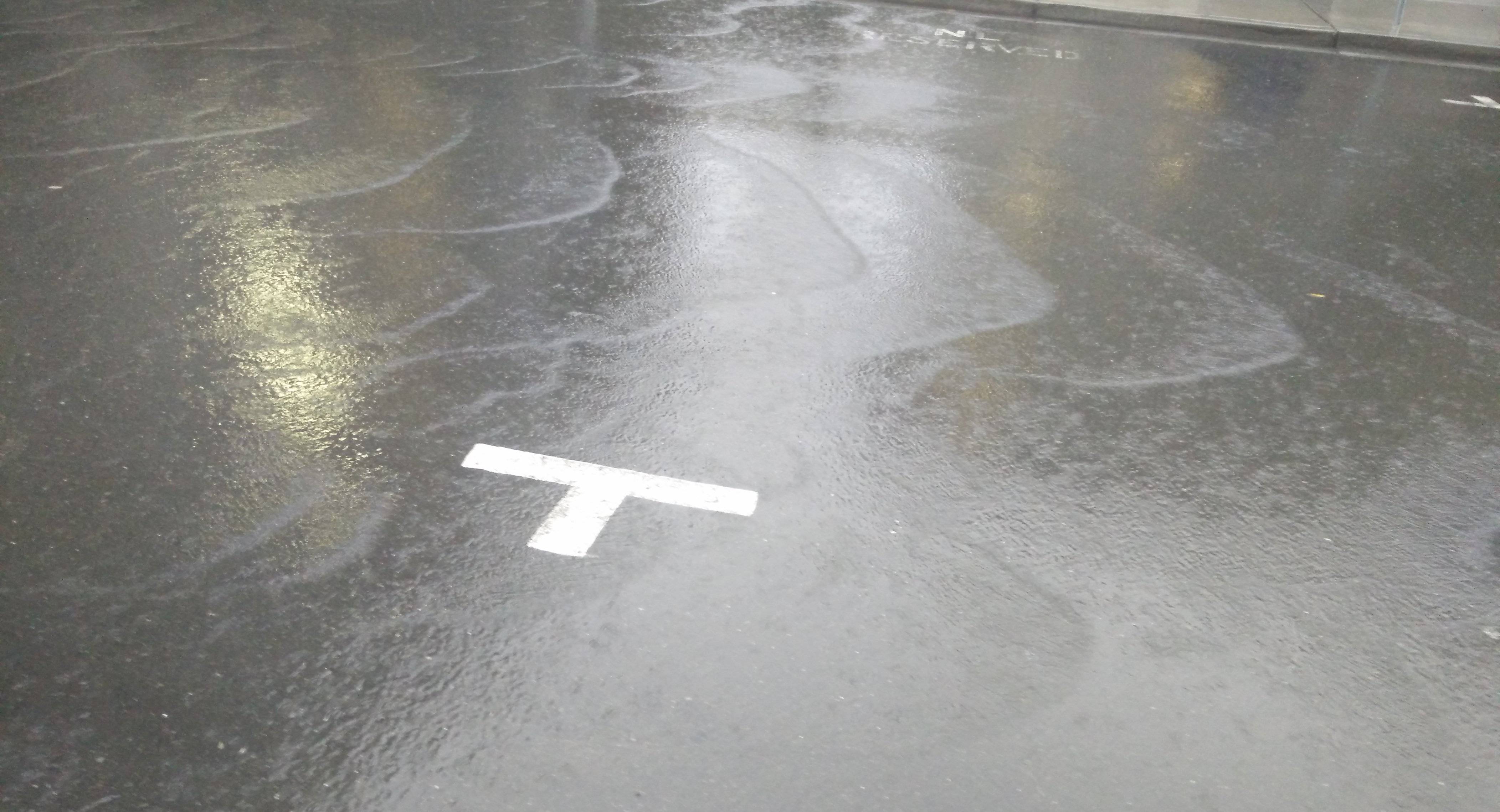 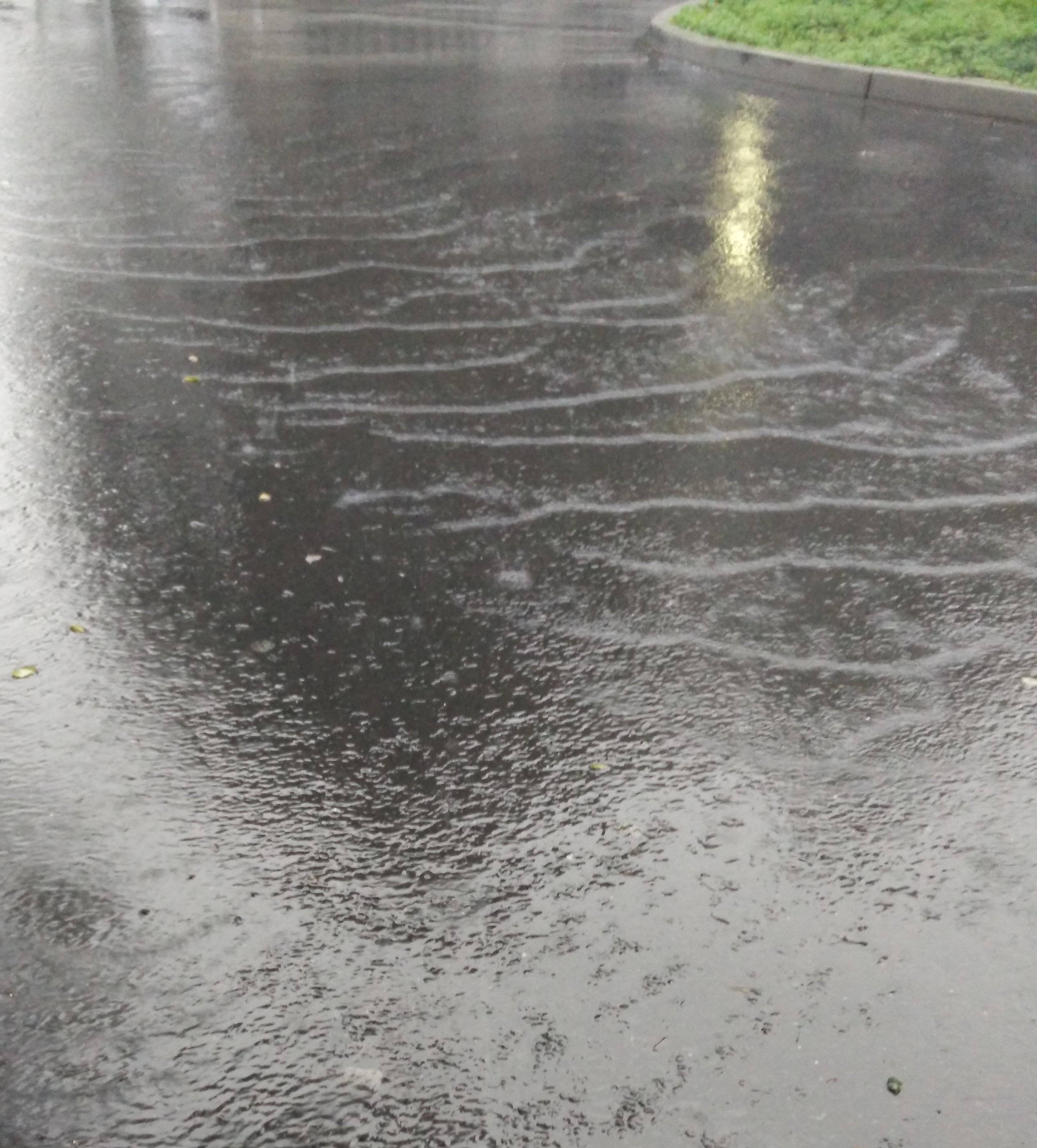 These waves are called "roll waves." They are due to an instability in shallow shear flows. The analysis is much too complex for a short answer, but if you google "Roll Wave" you will find more images and links to technical articles. If you are not bothered by a little mathematics you will find a discussion of the cause of the instability starting on page 259 in these online lecture notes: https://courses.physics.illinois.edu/phys508/fa2016/amaster.pdf

After the waves have formed due to the instability, the actual form -- a series of breaking waves -- is due to the non-linear propagation effect described by md2perpe -- the deeper the water the faster the wave.

I think that the explanation is that waves of different size run with different speeds. This makes the faster waves run up to the slower which make them stack up, or constructively interfere.

This as a speculative explanation, which describes source fluctuation that might affect the volume of water flowing down the street. It's not the cause of the roll wave phenomenon (see Mike Stone's excellent answer), but it may affect it by increasing water volume sufficiently to disrupt the roll waves. I've observed micro-variations in flows in mountain streams that are not characterized by shallow shear flows.

When a cold front passes through warm air, it pushes the warm air up and over the advancing cell of cold air. Moving cold air forms a wedge and creates an inclined plane that the warm air climbs. Likewise, when a warm front pushes cold air, it climbs over the cold air, but since cold air hugs the ground more tenaciously than warm air, the inclined plane has a more gradual slope. In either case, warm air climbs into the atmosphere gradually, not straight up.

The process doesn't affect all the air in the cloud simultaneously. As saturated layers of warm air climb the incline of cold air, time provides opportunity for changes in micro climate that may vary the amount of precipitation falling off the top of the conveyor belt.

The roll waves you see on smooth pavement might be affected as the volume of flow varies with air currents and temperature conditions at the top of the atmospheric conveyor belt, where pressure, temperature, and dew point undergo micro-changes.

I may have an explanation. Such a behavior is not to be expected (perhaps) in an ideal situation (uniform surfaces etc.). So, if it's due to an irregularity, the following may be true.

Suppose that we have a small bump/irregularity/cavity on the road (very small, perhaps a cm in height, and a bit longer along the road). Such things can be created on the natural surface of the road due to non-uniform eroding. So when rain falls on the slope these bumps/cavities act like a small dam/reservoir respectively. However, very soon When the rainwater level rises beyond their heights, water flows, and stops again when the level goes under. Due to falling raindrops, water in these cavities/bumps splashes, causing more water than equilibrium height to move out. This creates periodic flow of water down the slope.

Basically, we need a mechanism to disrupt the (expected) continuous flow. Any other ideas?

Any questions may be asked.

Not the answer you're looking for? Browse other questions tagged waves water flow turbulence or ask your own question.

14
Why do rain waves form and what is their connection to the texture of the surface they're on?
0
Why does rainwater form equidistant waves on an inclined road?

4
Does $\lambda\nu = c$ hold for all the waves in the universe?
1
Shaking water inside bowl causes waves but why does the water stabilize?
3
Does the equation of continuity hold for turbulent flows?
6
Is there a name for this wave effect?
1
How sensitive is double-slit result to a fixed wavelength?
0
In doppler effect derivation why are the considerations for source moving different from that of observer moving?
2
Is there a name for this type of wavevector?