Why does water appear still near the shore

Often when there's a light wind I notice this behaviour on lakes that there appears to be a very distinct line between the water with waves and the calm water. I don't know how well it comes through in the picture but the line really seams to follow the shoreline. Does anyone have any explanation to this phenomenon? 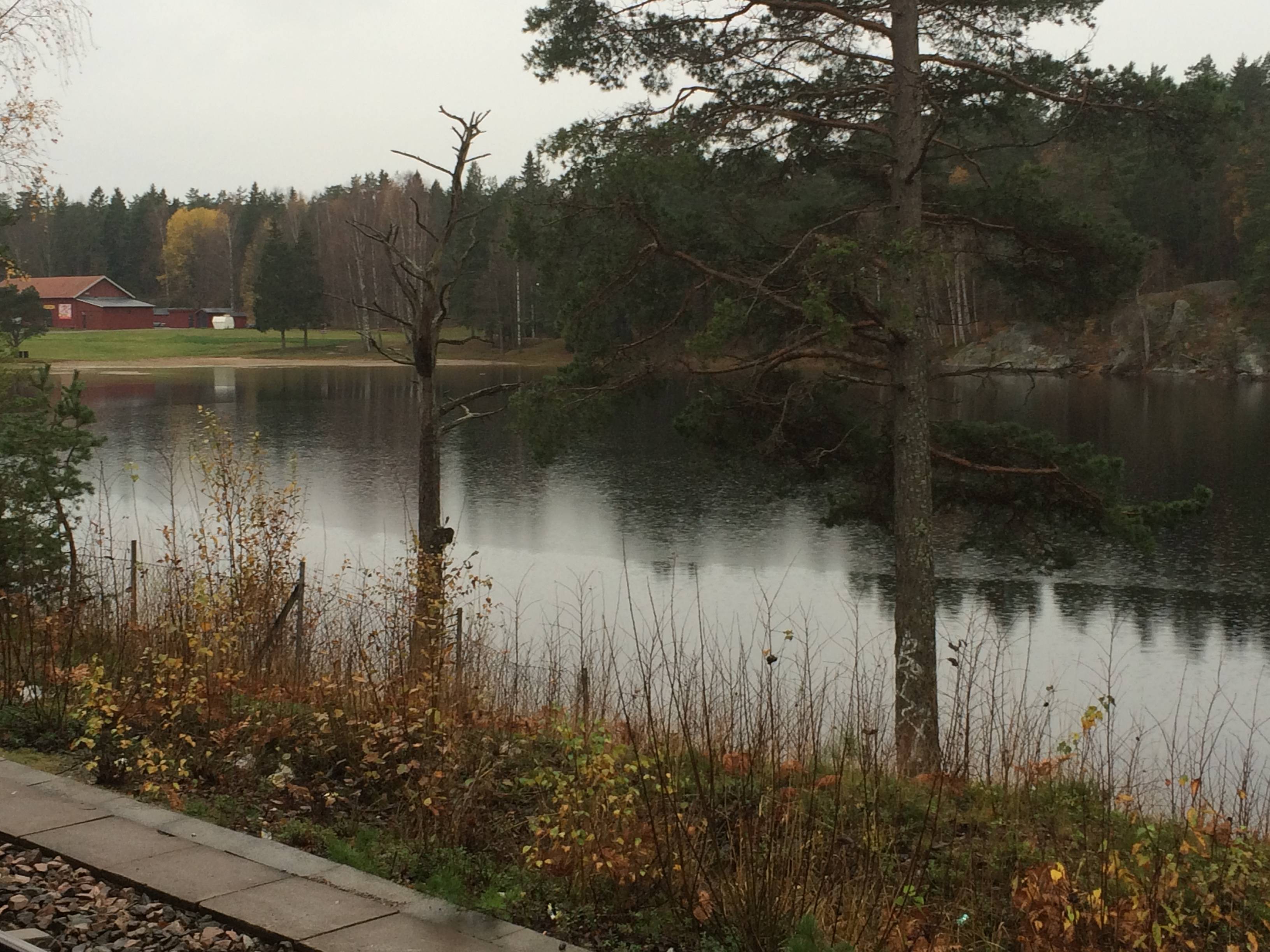 Thanks for all the input. The theories so far and some comments regarding them

1 It's an optical illusion. (@Cheeku in a comment) Thats what I thought at first but it most definitely is not. I walked back and forth along the shore and the line was at a constant distance

2 The water near the shore is protected from the wind (@David Rose in comment) I really don't think this is the case since the wind was blowing towards the red houses and that part of the lake has the "line" furthest out in the water.

3 The calmness is due to the water being shallow near to the shore (@David Rose and @dmckee in comments) Seemed reasonable (sort of) at first and also the lake is really shallow near the red houses where the "line" is really far out. But another observation that I failed to mention earlier (and where I could't get a picture) is that on the other side of the lake from the red buildings the lake is also really shallow but there the waves went all the way to the shore. Also @dmckee link busted this theory because the waves were really small (on the order of mm) and I know for a fact that the water is a couple of meters deep in the foreground of this picture and even at the shore next to the red buildings the water is about a meter deep a couple of meters from the beach.

4 Theres a thin oily film on the surface that is pushed by the wind towards the shore where it "piles up" and alters the surface tension properties of the liquid (@David Rose in comment and @docscience in answer)" By far the most reasonable theory in my opinion since it a rather small lake with a muddy bottom that contains lot of decomposing matter and behind me there are lots of roads and stuff that could leek pollutants into the lake. Also with the added observation I mentioned in response to theory 3 (that the waves spread all the way to the shoreline on the side of the lake "closest" to the wind) this makes for a really nice theory. Sadly I can't test it since I can't really do the water analysis but if there is no more plausible theory in a couple of days I will accept @docsciences' answer

This question can't be answered from the picture alone without additional observations/data but @David Rose has given a good list of hypotheses. The size of the waves appear to be within the regime of 'capillary waves' Capillary waves are surface boundary waves with wavelengths on the order of millimeters up to a centimeter or two, where the energy restoring force is dominantly surface tension rather than gravity. Given that, the hypothesis of surface tension is the more arguable cause.

I would suppose that there are oils on the water surface. perhaps from run-off that have coalesced and that were driven to that side of the lake by wind. The presence of oil reduces the traction forces of wind. The action of oil in calming water has long been known since the ancients who used olive oil to still the water in ocean going vessels.

To test that hypothesis would require analysis of surface fluid samples from each location.

Not the answer you're looking for? Browse other questions tagged waves everyday-life water or ask your own question.

0
Can a gust of wind have a distinct blade-like edge?

34
Why do tsunami waves begin with the water flowing away from shore?
0
Interaction of ocean waves and currents
12
Explanation of the waves on the water planet in the movie Interstellar?
2
Why can we hear sound better on the water than on land?
1
Intuition behind Airy waves dispersion relation
15
Strange reflection pattern on the water
3
What happens to the probability wave of a particle after it goes into a black hole?
1
Ocean waves breaking slowly at the shore during periods of turbulence
0
Water wave lens and imaging