Twin Paradox, Why is everyone avoiding avoiding the obvious [closed]

I know the ‘Twin Paradox has been done to death, and I think I understood every answer as given. But I have NEVER seen any answer the question I have. This question is about THE REAL paradox of relativistic time dilation:

Assume: Two spaceships (A and B) are in the vast blackness of space. They pass each other going in opposite directions at 80% of the speed of light (relative to each other of course. These ships are equipped with Bluetooth like clocks that, that transmit their time continuously, while monitoring the receive. When they receive a signal from another transmitter (the other ship, but only when in very close proximity) they reset their clocks. Now as it turns out: in relative terms, these ships, fly in a giant circle, 10 light years in circumference.

Assumption 1: There is no acceleration, just a constant speed. Since with each meeting the clocks are reset to zero, there is no need to “get up to speed or slow down” . We are looking simply at the time transmitted by each ship since the last transmission, and from these numbers we deduce the relativistic time dilatation.

Assumption 2: Although some may want to assume there to be a body bending space-time into a 10 Light year ring, you can just as easily imagine a coincidental collection of forces (space dust, static charges etc.) that just happen to bend the path(s) of the spaceship(s) into this huge circle. In either case, for the sake of this thought experiment, the requirement is to provide relativistic speeds that are symmetrical between spaceships A & B. We have no stopping, reversing direction, or changing acceleration issues to contend with.

Assumption 4: If I understand Relativity correctly, the clocks on both ships see the time on the other spaceship as moving slower than their own. This means it is just as correct to say; spaceship B is stationary and all relative movement was due to spaceship A.( Spaceship B's perspective) To spaceship B; it is A’s clocks that are moving slowly. But if A’s time is truly moving slowly (as far as B is concerned); then A will send upon arriving in close proximity to B: “It is 236,500,000 seconds since I last reset my clock” and then promptly reset the clock.

Assumption 5: This is an impossible Paradox. Surely A’s clock cannot be in a superposition of Assumption 3 and Assumption 4, transmitting BOTH 394,200,000 (Ass.3) seconds and 236,500,000 (Ass.4) seconds AT THE SAME INSTANT. It can only transmit One message or the Other.

Assumption 6: If I have erred and (somehow), the A’s clock transmits the same number of seconds from the point of view of either spaceship. Then one or the other of the ships was truly at rest, then space “knows” that one spaceship is truly moving while the other is stationary. Thus TIME is NOT FULLY RELATIVE. Time can still be relative with respect to speed, but it is not relative to each observer. Thus Spacetime is capable of dilatation or warping BUT it is with respect to velocity and shape the FABRIC of SPACE.

Assumption 7: Although the conventional telling of the “Twin Paradox” requires one of the twins to stay on earth, Special Relativity demands only relative speeds. So the retarded aging of a twin, like the slowing of the clock(s) should only depend on the reference frame of the observer.

This is an accurate paraphrase of Professor Herbert Dingle’s telling of the famous paradox.

Let's get the constant speed circular motion out of the way first - there is an acceleration for such motion - at least, in the scenario in your assumption 1, which can be studied with special relativity as the spacefarers move in flak, Minkowski spacetime.

The scenario in assumption 2 is actually different from that in Assumption 1 - it sounds like you may be misreading the Equivalence principle somewhat in thinking they are the same, and there is no acceleration here. The assumption 2 scenario is a general relativistic problem.

But both scenarios have similar qualitative outcomes - although the elapsed times between meetings of the twins are different in the two scenarios.

Picture the situation from the inertial frame of an observer $A$ sitting at the center of the big circle. Draw the paths of the spacefarers $B$ and $C$ in $A$'s Minkowski diagram. Their worldlines are helices, winding in opposite sense. But the helices are mirror images of one another, and thus have the same Minkowski length, i.e. the time elapsed as carried by an observer following the worldline.

Conclusion: As $B$ and $C$ pass one another, their clocks tell them that the same time has passes since their former meeting (diametrically opposite on the circle). It will be the length of time that the inertial observer observes their semicircular journeys to take multiplied by the time dilation factor $\gamma^{-1}$ for their speeds as measured by $A$. If $B$ and $C$ move at different speeds, so that, for example, the path of $A$ subtends angle $2\,\pi + \Delta$ and that of $B$ $2\,\pi-\Delta$ at $A$, then their clocks will be different, in a generalized version of the standard twin "paradox".

Both $B$ and $C$ are in freefall around some gravitating object or stress-energy distribution within the region inside the circle. This is essentially the same situation as two satellites orbitting the Earth in opposite directions along the same orbit. Again, the worldlines will be mirror images of one another, but now we must use the metric for the curved spacetime to work out what the total length of those worldlines will be. But again, by mirror symmetry, the lengths of the two paths are the same. Use, e.g. the Schwarzschild metric to work out this length for a satellite traversing a semicircle at a constant altitude, (spatially) circular orbit.

As before, as $B$ and $C$ pass one another, their clocks tell them that the same time has passes since their former meeting. One must, however, use the general relativistic metric to calculate this time.

There's no circular asymmetric generalization of this problem as there was for the Assumption 1 scenario where $B$ moves through a greater angle than $C$, but you could have $B$ and $C$ on different, elliptical, intersecting geodesic orbits. In this case, the clocks will again be different, but one must use the Schwartzschild (or whatever is appropriate to the stress energy distribution) metric to calculate the different elapsed times.

In general relativity, the equivalence principle is a local thing: it is essentially encoded in the assertion that spacetime is a (semi-Riemannian) manifold and that, if you zoom in enough on a generally curved spacetime, spacetime will look locally Minkowskian. You can't extrapolate this thinking nonlocally - spacefarers accelerating in circular paths in flat Minkowski spacetime are different from those in freefall circular orbits in curved spacetime.

Assumption 1: Even though these observer's sync their clocks at the outset, they cannot assume their clocks are initially running at the same rate unless they start in the same frame of reference. At some point they must have maneouvered into position (even back to the big bang); but fine, let's suppose the both were in the same frame and accelerated an equal amount in opposite directions to get to this scenario. Time dilation due to acceleration will have been the same for both clocks.

For my interpretation (perhaps as you predicted) I also assumed that if A and B are in the same free fall orbit but in opposite directions about a non-rotating body any effect of general relativity/frame dragging will be the same for both of them, leaving us free to observe special relativisitic effects. OK.

A&B meet up twice during their orbit, at half circle intervals. The line between them (their relative position) is a chord across the orbit.

A circle involves travelling away and then travelling back again. The component of velocity parallel to the chord is relative velocity. It changes as A & B orbit, indicating a relative acceleration.

What was a circular path is now a linear relative path, with a component of acceleration parallel to it.

Time dilation is a real effect resultant from changing frames (whether due to acceleration, or some info exchanged between frames). (It is not an apparent effect). to elaborate that point, have a look at this minkowski diagram on the twin paradox (reproduced from here https://en.wikipedia.org/wiki/Twin_paradox#Difference_in_elapsed_time_as_a_result_of_differences_in_twins.27_spacetime_paths just in case) 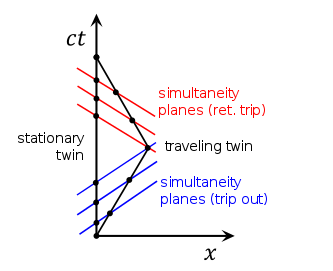 This just shows that the aging effect occurs when the travelling twin changes frames.

That being the case, to derive the effect it's significant who actually changed frames and who didn't, regardless of frame of reference.

In this case we have a symmetric even split of acceleration/frame shifts. The correct frame in which to asses the effect is the one that manifests those frame shifts. That is the frame of the orbit or circular path.

Once there is a reason to choose that frame, it's relatively easy to get from there to determining that the time dilation effect is equal for each observer.

This means that at any point on the journey A will not (NOT) observe B to be time dilated; because he will also be experiencing the same time dilation.

(The co-ordinate frame of A or B is not the correct frame from which to do the calculation.)

Indeed this is what proper time calculations do by integrating over the clock's world line.

Not the answer you're looking for? Browse other questions tagged special-relativity spacetime time or ask your own question.