Time taken by projectile on an inclined plane?

A particle is projected up an inclined plane of base angle $\beta$ with the horizontal with an initial velocity $V$. The particle collides elastically with the incline and rebounds vertically. If the particle reaches back the point of projection after time
$\large T = \dfrac {aV}{g \sqrt{1+b\sin^2\beta}}$
then enter the value of $a + b$

Note: $g$ denotes the acceleration due to gravity.

Well first of all I am confused over the word "vertical". Vertical as in making an angle of $90^\circ$ with the plane or the horizontal?? Confused over this, I proceeded in two cases :-

CASE I From the plane

So when a particle is projected up an inclined plane, the time taken by it to complete it projectile motion is :

When it is projected down an inclined plane :-

Here, $\alpha$ and $\beta$ have the same meaning, angle from the horizontal and angle of the inclined plane respectively.

Now, from what is given in the question, we know that the range of the projectile will be the same in both cases. And we have to find the sum of the times to go up and down the plane.

When it is being projected down the plane, $\alpha + \beta$ is 90. Now since the projectile reaches back the point of projection, the ranges up and down the inclined plane should be equal.

The formulas for these are :

(Alpha and beta have the same meanings)

Now the total time would be (i) + (ii), which involves the variable \alpha. So I need to eliminate the variable $\alpha$. I could do that using (v), but that would involve writing $\cos2\alpha$ and $\sin2\alpha$ ONLY in terms of $\sin\alpha$ and then using that value of $\sin\alpha$ in order to eliminate $\alpha$ from (i) + (ii). However, I dont think the solution to be that long/untidy and am like 99% sure that there must be a shorter/neater way.

CASE II From the horizontal

I pretty much do the same steps as in case I. In this case I get from equating the ranges : -

$\sin(2\alpha - \beta) = \sin\beta$ which gives me $\alpha = \beta$. This not only makes the time up the plane to be 0, but also makes the time down the plane to be $\frac{2u}{g}$, which is the same for a freely falling body/1D. Also, in this case I think the particle will fall back to it's starting position, thus never getting back to its original position. So I am like 80% sure that this is the wrong case, but I havent just got the gist of projectile motion along an inclined plane, so I think that I may be wrong.

Also, the word "elastic" means that no energy is lost right, so the particle rebounds with the same velocity with which it struck. But I think I vaguely remember reading somewhere that it's also got to to do something about making equal angles with the normal or something like that. My best guess is that this might be used somewhere and thus providing us with an easier relation between $\alpha$ and $\beta$. Either this, or the worst case scenario that I have COMPLETELY misunderstood the problem. PLS correct me if I am wrong anywhere in this explanation. I tried my level best to keep in compliance with the homework policy. Pls be kind enough to point out any mistakes I might have made n this regard.

I think this is a good question to test if you think like a physicist. One thing physicist do is to analyze a problem by looking at limiting cases. Here there are two interesting cases: one where the angle of the ramp is zero, so that the ramp is actually just a flat level surface, the other is where the ramp becomes almost vertical (I would say the ramp actually being vertical doesn't make sense, but you can still take the limit).

Think about what the trajectory looks like when the angle is zero. Think what the trajectory becomes as you make the ramp more and more vertical. Then it should become clear what the times are in these limiting cases. Now if you trust the formula they gave you, you should have enough information from these two cases to determine the two quantities they want.

"Vertically" means vertically upwards, in the direction of $\vec{-g}$. So case II applies. This means that after reaching its highest point C (vertically above the point of collision B) the particle retraces its trajectory back to the point of projection A. (See diagram below.)

An elastic collision means that there is no loss in KE. If the object rebounded from is fixed, then the angles of incidence and reflection are equal. 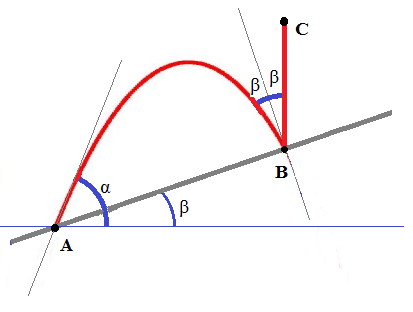 This is the diagram you should have drawn. If, as you suggest, the particle were launched at $90^{\circ}$ to the horizontal then it would start at B, rise to C, fall back to B, rebound and be projected to A.

Not the answer you're looking for? Browse other questions tagged homework-and-exercises kinematics projectile or ask your own question.