Newton's Law of Cooling as boundary condition to Heat Equation

I am reading a book on Partial Differential Equations, and they derived the 1 spatial dimension heat equation from scratch (using a rod as an exmaple with end points at $x=0$ and $x=L$) and then gave a couple possible boundary conditions with appropriate physical explanations of each. One boundary condition they used was Newtons Law of Cooling, expressed with this notation: $$-u_x (0;t) = h(T_e - u(0;t))$$ $$u_x (L;t) = h(T_e - u(L;t)) $$ Where $u(x;t)$ is the temperature as a function of space and time, $u_x (x;t)$ denotes the partial derivative with respect to $x$, $T_e$ is the external temperature, and $h$ is a positive constant of proportionality.

I'm okay with the rate of change needing to be opposite signs for the two ends, as positive Flux is pointing in different directions on the two faces, but I feel as though the signs should be switched as they presented them. They stated:

"if $T_e$ is less than the endpoint temperature, then $u(0;t)>T_e$ and the rate of change will be negative, so that we may expect the heat to flow into the he rod from the hehe exterior$.

Mathematically, by the given equation, if $u(0;t) > T_e$, then $u_x (0;t)>0$, which would seem to imply the heat is flowing in ( I would think ), but physically, I dont see how this is possible. Wouldn't there want to be an equilibrium between the rod's end and the external temperature? This, to me, would suggest that heat would need to flow out of the rod, as the temperature is lower outside. I may be missing something vital here, and I would love an explanation!!

thermodynamics temperature
Share
Improve this question
edited May 10 '19 at 7:37 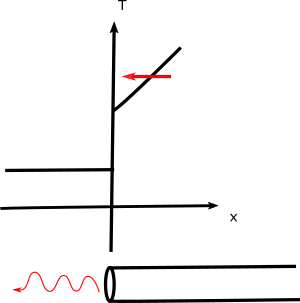 Remember that heat is always transferred from points with higher temperature to points with lower and this slant condition essentially guarantees that you will have a local from right to left transfer of heat at this point and since whatever heat moves left at an end point leaves the system this should indeed correspond to cooling.